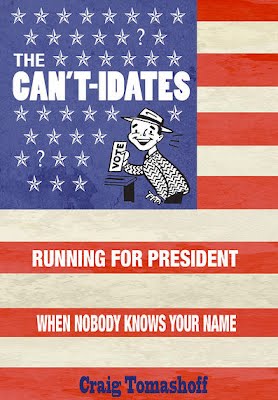 : I’m not a political person by nature. Most of the time, it seems the political world plays out more like a lame ‘70s sitcom with all its predictable characters and routine storylines. However, last spring, I got tired of hearing friends and family complain about the lack of exciting, innovative candidates for president. Everyone seemed ready to vote for "None Of the Above." So, I decided to take a 10,000-mile road trip across America in May 2015 to meet several of the more than 1600 "real people" who are legit candidates for the presidency. Including a couple in New England.

The Can’t-idates is about dreamers -- not all of whom are tin-foil hat crazy -- who just want to fill a hole in their lives by running for president. And as I drove to meet them all, I realized a lot about not just my life but also about the country. If we could all take time to believe in what our parents always told us -- "Someday you can grow up to be president" -- maybe we wouldn't be in the shape we're in.

Craig Tomashoff is a freelance writer/producer based in Los Angeles. His blogs appear regularly at Huffington Post.com. Most recently, he was a producer for The Queen Latifah Show. Prior to that, he served as Executive Editor of TV Guide, and has also worked as Associate Bureau Chief for People. In addition, he has written for the Hollywood Reporter, the Los Angeles Times, the New York Times and Emmy Magazine. Prior to The Can’t-idates, he was the author of You Live, You Learn: The Alanis Morissette Story and co-wrote I’m Screaming As Fast As I Can: My Life In B-Movies with Linnea Quigley. He has also worked as a television writer/producer for such series as VH1’s Behind the Music, The Martin Short Show and The Late Show With Craig Kilborn.