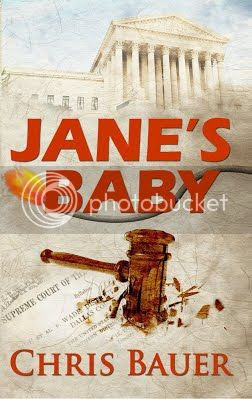 Whatever happened to Jane Roe's baby? Norma McCorvey, of Caddo-Comanche heritage, did not terminate the pregnancy that led her to become the anonymous plaintiff of the landmark U.S. Supreme Court women's rights case Roe v Wade because in 1971, when the motion was first argued, abortion in the U.S. was illegal. The Jane Roe real-life child would now be a woman in her late forties, the potential of her polarizing celebrity unknown to her. A religious rights splinter group has blackmailed its way into learning the identity of the Roe baby, the product of a closed adoption. To what end, only a new Supreme Court case will reveal. Tourette's-afflicted K9 bounty hunter Judge Drury, a Marine, stands in the way of the splinter group's attempt at stacking the Supreme Court via blackmail, murder, arson, sleight of hand, and secret identities.

“The thing I write will be the thing I write.” Chris wouldn’t trade his northeast Philadelphia upbringing of street sports played on blacktop and concrete, fistfights, brick and stone row houses, and twelve years of well-intentioned Catholic school discipline for a Philadelphia minute (think New York minute but more fickle and less forgiving). He’s had lengthy stops as an adult in Michigan and Connecticut, thinks Pittsburgh is a great city even though some of his fictional characters don’t, and now lives in Doylestown, PA. He’s married, the father of two, is a grandfather, still does all his own stunts, and he once passed for Chip Douglas of My Three Sons TV fame on a Wildwood, NJ boardwalk. As C.G. Bauer he’s also the author of SCARS ON THE FACE OF GOD, an EPIC Awards runner-up for best in 2010 eBook horror, and the editor of the CRAPPY SHORTS short story collections.