Tour Kick Off - The Jacobs Project by Samuel J.M. King

Sci-Fi
Collection of Short Stories
Jacobs Project and The First Angry 'Man' (a total of 15,000 words)

The mid 22nd century. It is in many respects a world we would recognize. Like our own,  it’s a world with instantaneous, worldwide communications, computers of ever increasing  sophistication and permanent human occupancy of outer space. But it is also a very different  world—a world where the riddle of “artificial intelligence” has been solved and our intelligent  creations live amongst us… And that’s the problem. Technology’s ability to create these marvels has outpaced society’s ability to cope with them.  Imbued with all of the characteristics that make us human, they are none-the-less not human,  and… they are sold in stores to anybody with the means to pay. The ramifications are obvious,  yet for some reason they weren’t seen in advance, and as SYMBIOSIS unfolds, that failure leads  to tragic consequences.

Irwin Jacobs, renowned cyberneticist, waited impatiently for neurologist Tom Wilson's
answer. "Well?"
Tall and impeccably dressed, Wilson shook his head emphatically. "They'll absolutely tear
you to pieces, Irwin."
"They'll have to catch me first."
The neurologist cast a dubious glance at his squat, balding and rumpled friend. "Well, that
should take all of three seconds," he said, laughing.
"Never mind. What I want to know is whether you'll join me or not. You're the best brain
man in the business, and I could sure use your help. It'll be one hell of a journey."
"Oh, I'm sure it will be—straight into professional obscurity. I just don't understand why
you're going down this path. It's not as if no one has ever experimented with neural arrays
before."
"Ah, but no one else has seen their full potential," Jacobs countered. "Annnd, no one else
has ever built an organic array."
"Right, and there's a very good reason for that. Nobody knows how. And even if you solve
that problem you've still got to interface the damn thing with your electronics. Another near
impossible task. So, I'll ask you again, why go there?"
"You of all people should know, unless you've got a line on hardware that can match the
networking and switching capacity of the brain. Throw in the ability to create new pathways by
rewiring itself, and I'd say you're on to some piece of hardware."
"You're insane."
Jacobs laughed. "Maybe."
"Maybe? You've spent your entire career establishing yourself as the go to guy in AI and
cybernetics. You're throwing it all away."
"What I've spent my entire career doing is failing, forty years of it. Forty years of
developing increasingly complex systems. Forty years of designing algorithms so elegant they're
virtual works of art but ultimately take me farther and farther from where I want to go. The
simple fact is, no matter how sophisticated we make the computers and the programs that run
them, they're still incapable of doing what a six year old child can do… think."
"By think, you mean self aware?"
Jacobs hesitated. His friend's question sounded very much like an indictment. "So?"
"So, nobody serious has thought about doing that for quite a while now, and you know it.
It's no longer the Holy Grail of AI."
"Well, it's still my Holy Grail. It's the reason I went into this field." He lowered his voice and
added, "I really want to do this, Tom. I always have, ever since I was a kid. Getting older hasn't
changed that." 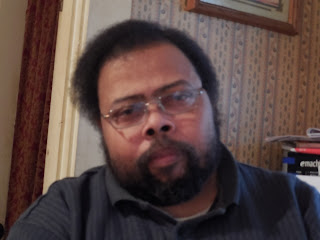 Samuel J.M. King was born in Boston, Massachusetts, grew up on the “South Shore” and
attended high school in historic Plymouth. Tired of school at the tender age of seventeen,
he joined the Marine Corps and after basic training, spent the next eighteen months—you
guessed it!—going to school. A stint at the Naval Communications Training Center in Pensacola,
Florida was followed by nine months at the Defense Language Institute in Monterey, California
studying Russian. He spent the remainder of his four-year enlistment in Japan.

After receiving an honorable discharge, he attended a computer programming school and
spent a number of years in computer applications, first as a programmer and then as a systems
analyst, designer and project leader. Later, he traded in his application’s hat for a more
technical role, becoming a field software support specialist for Digital Equipment Corporation,
the largest of the late, great mini-computer companies. After moving to New Hampshire, he
studied Computer Engineering Technology at the New Hampshire Technical Institute and went
on to design and program computerized industrial control systems for companies across New
England.

Having written a prodigious amount of technical documentation, he began to write fiction in
2002. In addition to Symbiosis, he has written a screenplay, as well as several other novellas
and short stories. He currently resides with his wife Donna in the heart of New Hampshire’s
“Lakes Region” where he is working on the final novel of the Symbiosis series: East of the Sun
and West of the Moon.
http://www.samueljmking.com/

a Rafflecopter giveaway
Posted by RABT at 2:00 AM