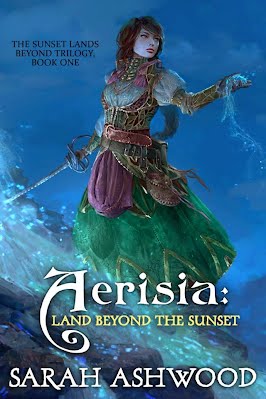 The mystery of other worlds is not one Hannah Winters ever thought she’d solve. However, the day she spots a brown-robed stranger with a magical staff in a neighbor’s field is the day she also discovers Aerisia, a magical land beyond Earth’s sunset.

Here in Aerisia, Hannah is believed to be the Artan, a legendary heroine prophesied to deliver Aerisia from the Dark Powers. Plenty of people, including the Simathe, a race of immortal warriors, and the Moonkind, people of the Moon, are willing to help her discover her true identity, but Hannah’s just an ordinary girl from Earth. She doesn't have any latent magical abilities and she’s not the Artan. However, her allies aren't seeing it that way. Neither are her enemies. In fact, Hannah’s life is in jeopardy nearly from the moment she arrives in Aerisia. And becoming the Artan may be the only way to survive…

Sarah Ashwood grew up in the wooded hills outside the oldest town in Oklahoma. Sarah is author of the Sunset Lands Beyond Trilogy, the poetry volume "A Minstrel's Musings," and the novella "Amana," along with numerous other published works. In her imagination, she soars effortlessly through historical and fantastical worlds. In real life, she lives (mostly) quietly at home with her husband and sons. Find Sarah on her Sarah Ashwood Facebook author page, on her Sarah Ashwood Goodreads page, or on Instagram where she goes by @runnerwritermom.