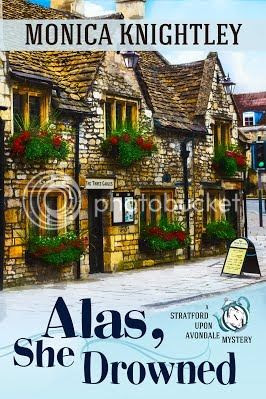 When ex-novice nun, turned steamy romance writer, Maggie O’Flynn moves to the charming village of Stratford Upon Avondale to open a tea room she expects plenty of murder, betrayal, and duplicity. On the stages of the town’s renowned Shakespeare Festival. But when a theater critic is found murdered on the town’s riverbank and the prime suspect turns out to be the sexy bookshop owner Maggie has had her eye on, she takes matters into her own hands. Will she be able to dig through the layers of betrayal and duplicity to find the true murderer before that handsome bookseller, Nate Larimer, finds himself behind bars? With the help of her loud, brash, spitfire of a friend, Gina Mattucci, Maggie plans to do just that.

With a bit of Shakespeare, copious amounts of tea, and a faux-English setting to rival anything the real England has to offer, ALAS, SHE DROWNED is the first book in THE STRATFORD UPON AVONDALE mystery series. Lovers of cozy mysteries will find a cozy home in Stratford Upon Avondale.

As I placed the sandwich board advertising, “Authentic English Cream Teas, $7.99”, outside my twee tea room I came to a realization. In the past two weeks alone, I’d had all the murder, mayhem, scandal, and treachery I could handle.

When I’d moved from my home in Philadelphia to this small town four months earlier I had no idea it was such a hotbed of scandal. Murders were commonplace; duplicity abounded; treachery was to be expected.

And yet the place is bucolic beyond words. Nestled in a rural corner of a western state, it is surrounded by orchards and vineyards. But much of its claim to fame is the center of town which resembles a quaint English village, with every building seeming to have been lifted from Tudor or Victorian England. Mullioned windows, exposed timbers, bay windows, gables, and jettied top floors appear to be building code requirements.

But still, all that murder and duplicity.

Murder and duplicity that could be found on Stratford Upon Avondale’s two renowned stages. The five-month long Shakespeare festival is the town’s raison d’être.

In my short time in the village I had already attended three plays—two Shakespeare and one production of Arsenic and Old Lace.

Yes, that was indeed plenty of murder and scandal, and the festival had just begun.

“Morning, Maggie,” called out Mrs. Vachon from the souvenir shop three doors down the street, where she was meticulously sweeping the sidewalk. After a few days of clouds and rain, the morning sun felt warm and welcome, and I noticed Mrs. Vachon wasn’t the only merchant outside tidying up.

“Good morning.” I waved at the energetic, gray-haired woman who’d been running her shop for over forty years.

Maggie O’Flynn—I was the newbie in town. Most of the business owners in the town dedicated to all things Shakespeare and England,— despite being five thousand miles from English soil—had been here for years. Yet they all welcomed me with open arms when I purchased the Merry Wives Tea Room and settled into their town. 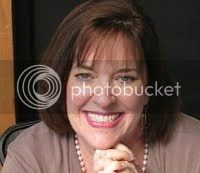 Monica Knightley began creating compelling characters and stories at the age of three, when she had a plethora of imaginary friends, all with complete backstories. Today any characters that come knocking on the door of her imagination find themselves in one of her mysteries, young adult novels, or paranormal romances.
When not fueling her reading addiction or writing her next book, Monica loves to travel with her husband, with England being her favorite frequently visited destination, and perhaps France coming in a close second. She can’t live without perfectly steeped tea, a good bold red wine, and dark chocolate. Monica loves her time with family and friends and can never get enough of either.

Monica lives in Portland, Oregon where the frequent rainy weather is perfect for curling up with a good book and a cup of tea.