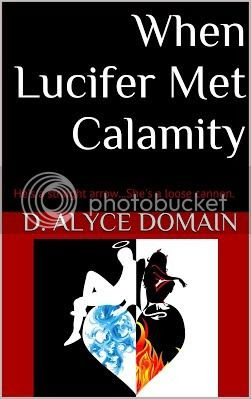 Lucifer - At eighteen months out of law school, six months on the job, and four weeks before his BAR exam, Luce has arrived. He’d been playing by other people’s rules all his life and now, poised on the brink of success, he will not let anyone stand in his way…especially not the junior-partner jerk at the office giving him and his assistant a hard time. On his way to give the creep a piece of his mind, he bumps into the infamous ‘Calamity Jones’…

Calamity – is tired of enduring her boss’s unwanted sexual innuendos.  When his fingers start to roam, Calam decides she’s had enough. It’s time to fight fire with fire.  So she devises an ingenious, if risky plan, to get Perkins off her back, keep her Job, and strike a blow for his numerous other victims around the office…only, things don’t go exactly as planned.

All Hell Breaks ‘Luce’ – After finding the loopy ingénue jack-knifed atop the archival files, Lucifer knows something is up. Calamity knows the jig is up. So, she comes clean. Turns out, they both have the same problem…Perkins. But, sparks fly when they decide to team up to bring down the boss. The Hitch? He’s a straight arrow…She’s a loose cannon. Can they work together to achieve a common goal?  Or will they both lose in the end?

Calam awoke with a headache and a confused void where her mind used to be.  Propping herself up on her elbows, she squinted in the morning light as she eyeballed her surroundings.  After a full minute and several pan-scans of the room Calam hunched her shoulders.  She had no clue where she was.  Geez, was it possible to be hung-over without actually getting drunk the night before?  The question was second only to her wild curiosity as to whose bed she occupied.  Good Lawd, had she been roofied or what?  A quick glance to her chest.  Nope.  She still had her clothes on…or someone’s clothes, anyway.  Something furry moved against her leg, and she jerked away and nearly screamed…until she heard an annoyed meow.  Sasha stretched in a deep yawn at the foot of the bed.

Sasha…Luce’s pervy pet.  Her mind cranked back up like a long-dead stalled car.  She was in Luce’s apartment, in his palatial king-sized bed, wearing his spice-scented t-shirt that dangled down around her knees when she eventually stumbled from the bed onto her feet.  Luce, ever the gentleman, slept on the convertible couch in the front room.  Had Calamity been in the exact same position but under different circumstances, she’d be ecstatic.  But, her impending arrest cast a wee pall over her euphoria.  Still, she preened with wicked satisfaction at having spent the night in his bedroom...Satan’s Lair, she dubbed, as an impish smile twitched at her lips.  Hmm, might as well have a quick lookie-loo…the chance may not arise again, she reasoned.

Luce’s private domain dripped with personality as compared to the more Spartan décor of the rest of his apartment.  Several framed family snapshots littered the nightstand along with a cordless telephone and touch sensitive lamp, which shockingly emitted a warm crimson glow when she brushed it with her fingertips.  Two impressionistic prints adorned the walls.  Each depicted vague anthropomorphic forms cavorting about against a pastel-blended background.  They reminded her of something naughty she once glimpsed when she’d accidentally flipped to the Spice Channel on her pay-per-view.

Shaking off her fantasies, Calamity put the book down and ran a hand through her hair and grimaced.  It had, of course, gone into kinky snarls during the night.  There wasn’t time for a wash and press even if she had a hot-comb or flat iron with her, which she didn’t.  She’d have to French braid it if she didn’t want to mirror Leo the Lion when she took her mug shot.  First things first, though.  She padded to the living room on bare feet to sneak a peek at the object of her affection.

He lay atop the covers, one solid sinewy arm flung out over the empty side of the bed while the other was bent at the elbow and pillowed behind his head.  His torso was a study in Italian sculpture.  Smooth tawny-gold chest as broad as the Atlantic tapered downward into a rippling six-pack of muscles.  Her gaze wondered lower.  The suggestive spiral of coarse dark hairs disappeared beneath the drawstring pajama bottoms.  Oy!  Calam stepped closer so that she cast the sunlight from the window in a shadow over his face.  Lashes like paint-brush bristles fluttered open.  Curious inky slits regarded her…with groggy interest, she noted.

“Yeah, I’m not a morning person either.”  She admitted.

Before she could respond, his hand shot out from behind his head and Calamity found herself sprawled torso to torso atop him, enveloped in a loose embrace.  She popped herself up on her elbows to spy two intense pools of ink impaling her…unable to resist, her gaze drifted downward to his mouth.

“Did you sleep well?”  His voice reverberated deeper than his usual baritone.

Lusty thoughts a’jumble in her brain, Calamity could only nod.  Have mercy!  He might think her a presumptuous tart but at the moment, the sensual lure of his lips was too powerful to ignore.  Calam shimmed up to close the distance between them before she lost her nerve.  His bottomless-pit black orbs stalked her, seeming to guess her intent…but he made no move to help or to hinder.  So she brushed his mouth with a light, lingering kiss, giving him the choice to put an end to it if he wanted.

A deep rumble in his chest vibrated through her, stoking the fires of her confidence.  She smiled against his mouth when she felt his lips part, inviting her in.  Encouraged, Calam deepened the kiss.  For the sake of balance, she flattened her palms on either side of his head.

Meanwhile, Luce lost a hand in the kinky tufts of her hair.  The other roamed up and down her t-shirted back.  Heaven help him, but her small warm form felt sinful atop his body.  The knowledge that she wore his shirt, and judging by her simmering body heat, nothing underneath, intrigued him all the more.  The soft feminine feel of her ignited his lower regions and sent them into a slow burn.  He derived an almost perverse pleasure from letting her set the pace of their interlude.  That this woman, whom he out-weighed by at least a hundred pounds, could produce such a quicksilver reaction in him with a chaste little smooch amazed him, hooked him, cementing his fascination with her.

She caught his lower lip between her teeth, teasing at first but then with purpose, she inched away…upward, pulling him along for the ride.  He knew what she wanted and complied, rising to follow her into a sitting position.  Her rear slid snugly into his lap.  Her bent knees rested on either side of his hips, while her hands crept around his neck.

Unable to curb his appetite for her, Luce slid his hands down to her compact yet delectably curved bottom, tilting her closer, molding her against his body.  He wanted her to feel him…see her expression, gauge her reaction to the telltale––He felt her tense, and chuckled as she broke off their playful-turned-explosive kiss.  She squirmed against his blossoming ‘affection’.  Ah hell…he grimaced as a pleasurable pain ripped through him.

“Shorty, uh...” He pulled back a ways.  Inky black eyes met her chocolate brown orbs… checking for approval or revulsion.  She broke off first.

“I only meant to kiss you.”  She explained in a squeaky voice strangled with… embarrassment, he guessed.  “I’m…eh, sorry.”

“Don’t be.  I’m not.”  Luce grinned despite himself.  Damn, did the woman know how adorable she was?  “Although, it’s probably better if you get up now.”

“Oh!  Of course, my bad.”  She clumsily disentangled herself from him and got off the bed.  He watched her meander over to the kitchen, fidgety, with his t-shirt dangling teasingly off one shoulder.

“I could fix us something to eat while you take a shower?  I mean, if you don’t mind my invading your kitchen.”

Luce stood, heading toward the bedroom.  A cold shower, he thought.  “Yeah, sure, make yourself at home.”

D. Alyce Domain. Is a long-time lover of creative fiction.  She learned to read with Dr. Seuss, grew up reading Sweet Valley High, James Howe, and Lois Duncan, and graduated to category romance with Harlequin and Silhouette in her teen years.  Ms. Domain started out writing fan-fiction after her favorite fictional characters met with death and cancellation on network television.  Inspired by the entertaining, multi-layered storylines created by so many female romance, young adult and television writers, she began to experiment with her own characters.  Coupled with her own unique brand of genre-bending romantic fiction, Ms. Domain was able to create a whole new world within the pages of her books.

Ms. Domain was born and raised in Houston, Texas, the youngest daughter of Charles and Eunice Domain.  She has one older sister.  She earned a BS in Biochemistry and a MS in Biomedical Sciences.  She worked in Patient-Based Biological Research before switching careers and opening her own fashion boutique, The Aesthetic Domain.  In addition to fashion apparel and accessories, she sells her own original jewelry creations and runs the Boutique & Blog website, which is based in Houston, Texas.  Ms. Domain also has avid interests in inspirational music, art/entertainment, and history.