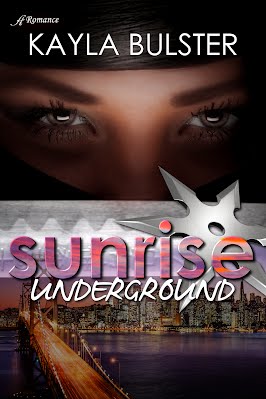 For Tilly White, ballet is her only escape from life, from her grief over her mother’s and brother’s deaths, and from her abusive stepfather, Fletcher. Late one evening as she leaves the studio, someone throws her into a van. But before they can carry out their plan, a mysterious boy rescues her… and steals her necklace?
Desperate to reclaim the last item she has of her family, Tilly chases her rescuer into the sewers where she discovers a secret society of ninjas. Through training with them, she learns to have real faith, which she’ll need when the job gets all too personal. The ninjas investigate a local mob boss to find Tilly’s best friend caught up in the mess. Fletcher might be involved, too! Her only allies are these ninjas she barely knows. Tilly will need to rely on her faith and her colleagues to save her friend.

After graduating with a bachelor’s degree in English and a master’s degree in education, Kayla began working as a high school American Sign Language and English teacher. Her debut novel, Wishful Thinking, was originally released by Mckinney ePublishing in 2011. Kayla used her experience as a martial artist, and stories from her high school students as inspiration for Sunrise Underground. When she is not writing or teaching, she works as an actress where she continues to develop her skills as a storyteller. She lives with her husband and dog in San Diego, California.