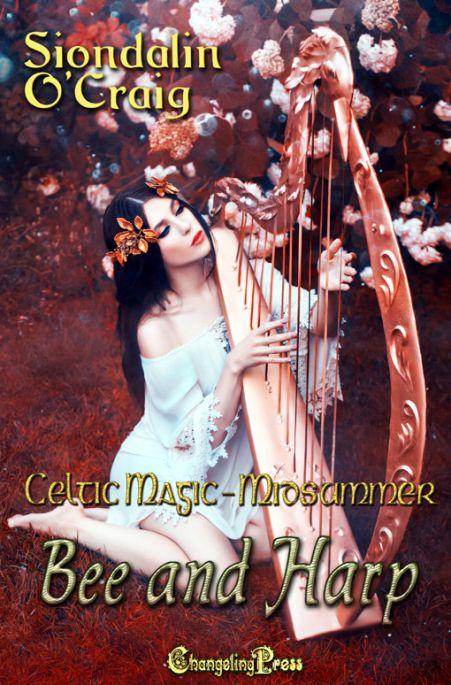 Dublin Museum Curator Bee McBride’s research tour is interrupted by a shady stranger with a broken harp -- and a broken heart.

When Bee, the stranger, and the harp are kidnapped by art thieves, Bee discovers the dusty instrument is the legendary magic harp of the ancient Celtic god Dagda.

Can her buzzing fervor find a way to unlock the harp’s music and the stranger’s ardor before Midsummer Night? 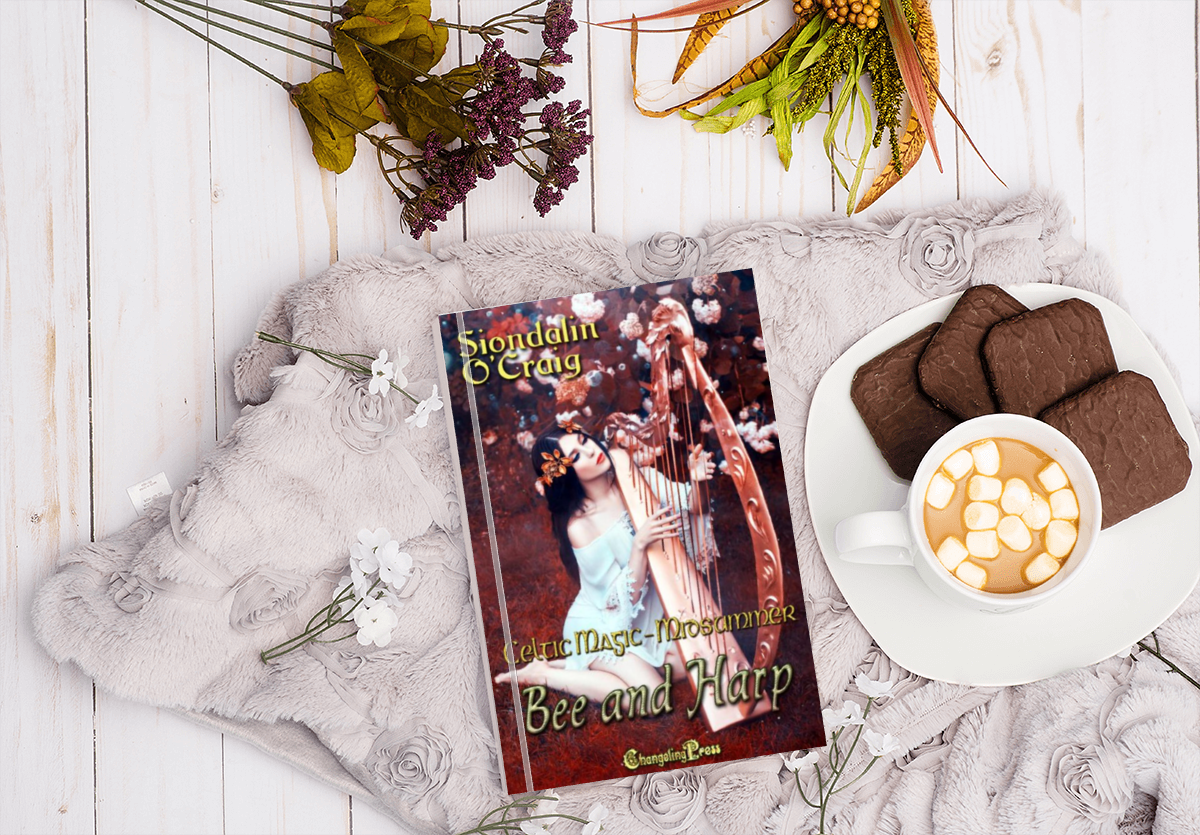 Kevin O’Donnell called the place where he’d been resting his head these last couple of years the Marble Arches, after the caves in Fermanagh. These caves under FDR Drive weren’t etched into limestone, however; their side walls were crumbling concrete from an early era of Manhattan development. Bits of shell and round stone sloughed off onto the floor each time he brushed by it. The supporting pillars were concrete of a more modern vintage, but in the same rotted condition, stained by runoff from the road above, broken flakes exposing lines of rusted rebar.

The back wall was raw Manhattan bedrock, and in this heat it had the advantage of staying cool, and while the drought was doing murderous damage elsewhere, it meant the floor of the Marble Arches stayed blessedly dry for the moment. Sitting with his back against the bedrock, Kevin could look out across the docks and over the East River to Brooklyn, watching the yachts, the tour boats, and the giant freighters that taunted him with their ability to leave this place and bring their sailors back to homes and families far away.

For ten days, Kevin had been trying to coax sound from the harp. He sat with its base tucked between his legs, cushioned by the neatly folded wrap of linen, its soundboard held tight to his chest in a lover’s embrace. Sometimes his fingers floated silently over the strings. Other times he just held it close, feeling energy flowing from it into his body.

Kevin cleaned the wood slowly, carefully, using a bandanna he found in the gutter, and the water from a dozen half-full plastic water bottles he pulled from garbage cans. Rich carving emerged from the grime. Clasped in the dragon’s claws were two large roses, so lifelike that it appeared fresh drops of dew spangled their petals. The roses were bundled with oak leaves, and acorns tumbled down the pillar.

He had stopped in at the sailor’s mission on the Bowery and begged a pair of nail clippers. He clipped his ragged nails straight across, slightly longer than the tips of his fingers. Plucking the strings of an ancient wire frame harp was done with the fingernails.

He found enough change on the street to buy a cup of tea at the coffee shop across from the Strand bookshop and used the foaming pink soap in their restroom to scrub the layers of grime from his hands. He pumped more soap into his empty paper teacup and took it back to the Marble Arches. He bathed the wire strings in the soap and let them soak, then poured clean water over them and rubbed them down with the bandana.

He’d been right. The corr, or pinboard, was brass, embossed with four-stranded knotwork. The tuning pins were also brass, burnished to a sheen, their leaf-shaped heads inset with silver triskeles. But the strings themselves were pure gold. The harp of legends, he thought. This can’t be real.

His perch under the roadway suddenly felt confining, stifling. He wrapped the harp and walked out onto the Brooklyn Bridge. The sun was burning hot and blindingly white, but the air over the East River was stirring. The tourist crowd was subdued in the heat, and the joggers who usually occupied a steady lane of the walkway were completely absent.

He found an unoccupied bench in the shadow of the bridge’s dark limestone towers. He wrapped his arms around the harp. A breeze wove between the strings, and he thought he heard a faint, high-pitched hum. He pressed his ear to the frame and listened. Yes, there. So fragile. So distant. But the harp did have a voice, inside the soundbox. The harp was alive.

He put his fingers to the strings, his left hand reaching out to the high strings nestled in the point of the frame, his right hand over his thighs, spread over the bass strings. The hand position was the opposite of that on modern harps, but this was the way frame harp playing was depicted in the ancient carvings and medieval manuscripts, and so it was how frame harps continue to be played by the small handful of people in the world who had any familiarity with them.

He bent his head as if in prayer, pressed close against the soundboard. He plucked a string with the middle finger of his right hand, then with the ring finger, silently playing the pick-up notes to Pretty Maid Milking a Cow. The lyrics had emerged in the nineteenth century, but the origins of the hauntingly poignant harp tune underneath the ballad was lost in antiquity.

His hands bloomed into motion, the ghost of the soundless tune echoing in his mind. A living vine of energy began to grow between his body and the ancient harp, its gold strings glittering.

The notes in his mind tangled with the breeze rising from the water, and swirled into visual images. A woman’s hands, her wrists, her forearms bare, in dim light, glistening with water. Her shoulders, rising from a dark lake. A curve of hip, strong legs, bare feet on a stony shore. Drying her auburn hair. Looking at him with soft brown eyes. Eyes that were full of warmth. Eyes that were full of love. Full of desire.

He stopped and straightened his spine, hands reaching to damp the strings by habit, though they had yet to make a noise. He felt a current coursing through his body, from his fingertips up through the long disused muscles of his forearms, muscles that used to pop with sinewy definition when he played ten hours a day. The power ran down his spine and through the long lean muscles of his legs, taut from walking countless miles of lonely sidewalks.

Kevin realized, as if he were watching himself from a distance, that his cock was pressed rigidly against the harp. He froze, motionless, as if his erection were a wild bird that he did not want to frighten. He took his hands away from the harp, resting them on his thighs. His body came back to the bench on the Brooklyn Bridge, but something inside of him had changed.

Siondalin O'Craig writes romance with the slow burn of a peat fire on an autumn night deep in the woodland hills. Sip a glass of Irish whiskey, turn the page, and let the magic overtake you. Siondalin lives in the mountains of New England where she walks under the trees celebrating the wheel of the year, grows a luscious garden full of magical herbs, and plays a wicked Irish fiddle. Follow her on Facebook and email her at siondalinocraig@gmail.com to sign up for her newsletter.