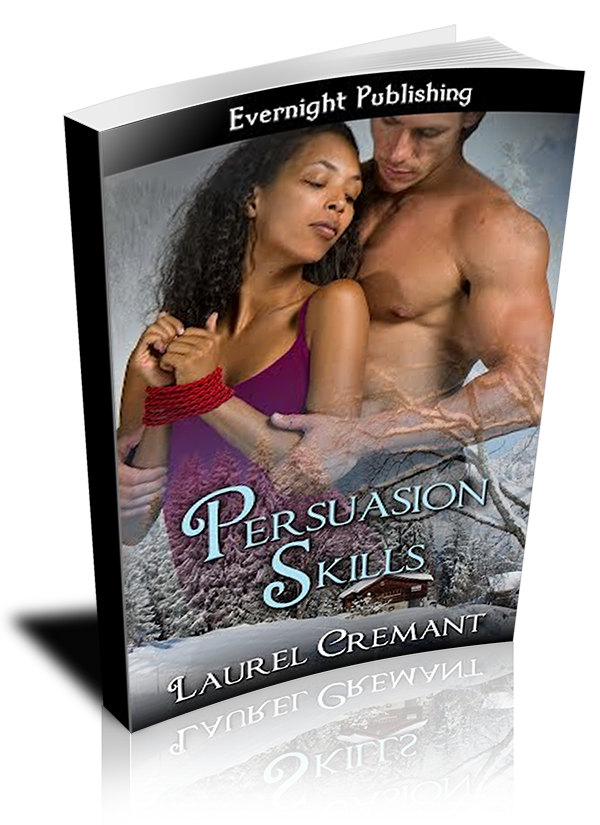 In the aftermath of a major health scare, Pepper Holts makes the relief-inspired decision to seize the day. Unfortunately, most of her “seizing” involves a bit of merlot and her best friend's pants! After a shared night of passion she realizes that her feelings for Jax are a lot more complicated than she ever thought.

Jax has finally realized that his allergy to marriage has nothing to do with the institution itself, and everything to do with the women in his bed—or more specifically, the one woman not in his bed. Her reaction to their one night together has him scrambling to regroup. So he does what he knows best—he disappears, and he thinks. The plan?—convince Pepper into staying with him at a secluded cabin for one week. One week of pretending to be a happily married couple to show her how great they could be together.

“Hell, Pep, I missed you,” he said before dragging her from her chair into his waiting lap.
He dipped his head to the crook of her neck and engulfed her into a tight hug.
There was nothing quite like a Jaxon Grey hug. He hugged with his whole body. His tall frame and broad shoulders always curved just right around her, immersing her in a mantle of warmth and shelter.
She dipped her head and rubbed her chin onto the top his head and closed her eyes.
“I missed you, too, jackass.”
His resulting rumble of laughter caused his chest to shift against hers, and just like that, her back stiffened in addition to a few other things along her body.
She bit back a groan as her nipples tightened against the lace of her bra.
The warm gust of his breath against her neck wasn’t helping matters either.
“You’re such a sweet talker,” he said. “And since I like you so much, I promise not to spank you for your bad behavior.”
He pulled her in tighter and began to rub the base of her back. His stroking hand was far from soothing as it settled low, and his fingers grazed the swell of her ass. All it did was remind her of how good his big hands had felt stroking her naked flesh.
She shifted uncomfortably on his knee, trying to scoot away from the heat of him.
“I’m sorry, but I left my Emily Post handbook at home.”
He lifted his face from the crook of her neck and drifted his hands lower. Holding on to her hips, he dragged her forward and caught her gaze with his.
“Really? That’s too bad. Chapter six is dedicated to the perfect way to drape yourself across a man’s lap. Feel like practicing?”
Both his suggestion and hooded gaze held her captive for a few silent seconds. The idea of his strong hands spanking her ass flushed her body with heat.
The thought of him holding her down at his leisure and pleasure was surprisingly arousing. She knew that Jax liked to control things in bed, but how far did his need for dominance go?
“I’ve been doing a lot of thinking.”
He continued speaking as if he hadn’t just casually filled her mind with raunchy goodness. She tried not to pout before responding.
“It is what you’re known for,” she said, trying hard not to stare at his mouth. Her clit was already warming at the recollection of what that mouth could do.
She yelped at the pinch he gave her hip.
“Brat. I’m serious. After Mom died, I really started thinking about what I wanted in my life. I started thinking about all of the things missing.”
“Jax, you can’t expect to fill the void your mom left with things. It’s just gonna take a little time to heal.”
“I’m not talking about things, Pep.”
He smoothed a hand up and began to rub the nape of her neck.
“Mom was always pestering me about settling down and starting a family, but I always thought there was plenty of time. You know me. I’ve never been one to believe in love and marriage.”
Pepper tried not to flinch at his words. Jax had always considered love to be an illogical emotion. He always joked that it was just nature’s chemical drug designed to propagate the species. His outlook on love was one of the reasons why she had always been able to avoid acting on her attraction to him. There was no use ruining a perfectly good friendship for Jax’s idea of a romantic relationship.
His words only served to remind her that falling in love with him was a lost cause.
“But, ever since the funeral, I’ve realized she was right.”
It took a few seconds for his words to sink in.
“Uh, what exactly was she right about?” she asked, confused at his line of thought.
“She was right. I should be thinking about getting married and starting a family,”
“What? Okay, who are you, and where have you hidden the real Jaxon Grey?” she said, laughing desperately, and hoping this was his version of a horrible joke.
The look on his face sobered her up quickly.
“You’re not joking, are you?”
“No. I’ve analyzed the situation and determined that my mother was right. So I’ve decided to get married,” he said.
“Married?”
The words came out of her mouth in a whisper of disbelief. Married? Married?
“Yeah, married. And I’ve concluded that you would make me the perfect wife,” he said before pulling her head down and covering her shock-slackened mouth in a hot kiss.

The smooth humming of an engine finally wove its way up the road as he continued to chop.
He glanced up from his task in time to see a slate grey SUV make its way up the gravel path that passed as the driveway to his cabin. Within a few seconds, he could see Pepper’s face peering at him through the front window.
The usual sense of peace that her presence always gave him rushed through, right before his skin tightened in a zing of awareness. Seeing her never failed to jumpstart his senses. Her features had changed very little since college, but she’d grown her afro out to a long mass of curls that stretched past her shoulders.
At that moment, the mouth he’d secretly lusted after for years was set in a firm line, and a blaze of anger shone in her steady gaze. Neither warning sign prevented a smile from spreading across his face as the car drew near.
She wore a white snow cap with earflaps, her curls spilling around her shoulders, and what looked like a heavy white winter coat. She looked like a ferocious bunny.
If looks could kill. He chuckled softly.
He swung the axe one last time and planted the blade firmly in the chopping block before walking leisurely to the top of the drive and waiting.
It wasn’t hard to keep the smile on his face as his gaze caught hers and held. He could practically feel the waves of rage rolling off of her as she pulled the car to an abrupt stop only inches from where he stood.
He merely winked at her and gave a cheerful wave. God, he loved hunting rabbits.
She stared at him for a searing moment before climbing out of the tall vehicle and dragging out a medium-sized piece of luggage. She snapped up its telescoping handle and marched the few steps it took to stand in front of him.
He let his gaze wander over her frame, taking in the rapid rise and fall of her chest, the tight grip she had on the luggage handle, and the clenching and unclenching of her free hand. Yet the only thing that caused his smile to dim was the hurt mingled with the outrage on her lovely face.
He let his gaze drift back to her clenching fist for a moment before looking at her face again. Staring into her eyes, he let loose a loud sigh as he widened his stance and shoved his hands into his coat pockets. This is going to hurt.
“Go ahead. Do it. You know you want to.”
He let the taunt hang in the air, waiting for her to speak, react, do anything.
She stared at him for a few seconds before her eyes swelled with unshed tears.
The sight caused a small ache in his chest. Nothing ever hurt as much as seeing Pepper cry.
The thought barely registered in his mind before she pulled back her clenched fist and slammed it squarely on his jaw.
His head jerked to the side with a snap.
“Fuck!”
He let loose a few more choice expletives. Trust Pepper to have a killer right hook.
The stars in his eyes cleared just in time for him to watch her turn and stomp toward the porch steps and up to the front door of the cabin.
“Feel better now?” he called out to her retreating back.
Her answering response was a decisively unladylike hand gesture over her shoulder before she entered the cabin and slammed the door behind her.
He rubbed his jaw for a few seconds before turning and walking to the car door. Peering inside, he glimpsed the keys still dangling from the ignition.
Reaching inside, he pocketed the keys before popping the hood of the SUV open.
“Well, let the games begin,” he muttered to himself as he walked to the front of the car and reached under the hood.
He barely winced in pain as a smile spread across his face while he reached into the belly of the car and yanked out a bundle of wires.

Laurel is a romance author, who like most writers loves to read. Her first love (pun intended) has always been romance. From the sappy YA romance novel to the more risqué erotica novels, Laurel is a sucker for a good love story.

Laurel writes paranormal and contemporary romance and is a self proclaimed, out of the closet nerd. She admits that she can't seem to avoid adding a bit of "nerdology" or "geek-dom" to all of her books. Living in Miami, she also admits that she can't seem to avoid giving her heroines gorgeous shoes, "In Miami, we worship everything strappy, open toed and just plain hot!"