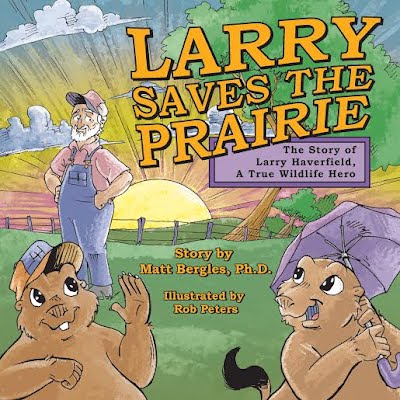 Through the voices of Annabelle and Angus, discover what almost happened to wildlife on the Kansas prairie. When Larry receives a letter that says he must destroy the prairie dogs on his land, he and some of his neighbors join together to make certain that all wildlife remain unharmed. Not only were black-tailed prairie dogs at risk of destruction but the already-endangered black-footed ferrets were at risk of becoming extinct.

In Larry Saves the Prairie, with the help of Annabelle and Angus, you'll discover what it means to be a true hero, and most especially, what it took to save prairie wildlife in Kansas.

Matt Bergles is a Colorado native who grew up in Pueblo, Colorado. He earned a bachelor's degree in social science from CSU-Pueblo, his master's degree in U.S. history, and a Ph.D. in public affairs at CU Denver, as well as a certificate in alternative dispute resolution.

Matt currently teaches at a K-8 private school in Denver, where he has witnessed firsthand young, inner-city kids' curiosity and love of animals and nature, observing that every time they are asked what community service project or charitable cause they'd like to be involved with, most K-3 students pick something related to domestic animals or wildlife. This natural love and curiosity led Matt to write Larry Saves the Prairie for young children.

Matt is an independent researcher and advocate for wildlife conservation, especially conservation of prairie habitat. Matt lives in Denver with his wife, Kate, two children, Luke and Mary, and dog Samuel. He is a volunteer coach, a private pilot, and has helped teach his teenage son to fly.