PROMO Blitz: The House with the Green Roof by @_AshishVikram_ #excerpt #giveaway 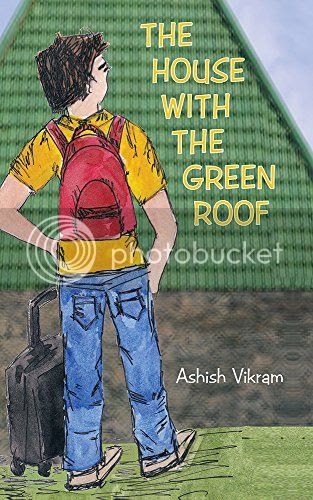 Veenu has just graduated from IIT Delhi. He arrives in Bangalore, only to find that the plum software job he had landed himself is not waiting for him. As consolation, a beautiful girl called Vini claims to have been waiting for him instead. But things are not quite what they seem to be. A dead body appears behind Veenu just as he is about to put his arm around Vini in the dark night. A mysterious man with a hairstyle that looks like a lava crater and fond of tomato juice keeps appearing almost as frequently as the signature suspense tune. The chief inspector, with a habit of pulling at his hair, does not believe Veenu’s incredible stories. And what does all this have to do with the Japanese Prime Minister and a beautiful Race Horse’s behind? The clues are hidden in the humor!

“Name?” said the Chief Inspector staring into his notepad.

The Chief Inspector looked up. He scowled at Veenu. “Your name” he said pointing at Vini.

The Chief Inspector looked back into his notepad. “Address?” he said.

“No B 79, Koramangala, 9th Block, 2nd Cross, Bangalore, India” said Veenu. There was a pause as the Chief Inspector wrote this down. He looked up from his notepad into Veenu’s eyes.

“It is a beautiful house with the green roof” said Veenu helpfully.

The Chief Inspector scowled. “Answer only when asked” he said.

“What do you do?” said the Chief Inspector.

“I am a software engineer” said Veenu.

“Corn. Corn. C-o-r-n Systems” Veenu spelt it out while trying to draw the outline of a corn on the cob in the air with this fingers.

The Chief Inspector scowled. “How long have you been working there?”

The Chief Inspector stared dirtily at Veenu. “Don’t make a fool of me” he said. “You software engineers think that the Bangalore police are a bunch of fools. Do you? Do you work for this… this” he consulted his notes. “Corn” he continued scornfully “Systems or not?”

The Chief Inspector dropped his pencil forcefully on the table and gave Veenu his dirtiest look so far. “Yes or no?” he shouted. “Mahalingam!”

On this cue, Mahalingam scowled at Veenu. “Answer properly” he said.

“No sir” said Veenu. “I used to work there but I… I got fired. I am not working anywhere now.”

“Not working” repeated the Chief Inspector and wrote something in his notepad. “How long did you work at this, this Corn Systems before you got fired?”

The Chief Inspector scowled his biggest scowl so far. “Mahalingam!” he growled.

“Did you work for this Corn Systems or not?” asked the Chief Inspector sternly.

“Yes sir” said Veenu. “I mean no sir. I got fired before I joined.”

The Chief Inspector stared at Veenu for a while. “Where did you work before you did not join Corn Systems?” he said finally.

“I was studying at IIT. IIT Delhi sir. I just came to Bangalore yesterday.” Veenu explained

‘And this girl?” said the Chief Inspector pointing at Vini but looking at Veenu. “Your girlfriend?”

“No. No” said Veenu vehemently. “She is not my girlfriend.”

“Then what is she?” said the Chief Inspector. “Your wife?”

“Just your friend” said he Chief Inspector scornfully. He turned to Vini. “Address?” he said.

The Chief Inspector’s brow furrowed. He seemed to be deep in thought. “Where have I heard that address before?” he said to himself softly. He looked at the ceiling.

The Chief Inspector looked at his notes. “Yes!” he said. He turned towards Vini. “This joker stays with you?” he asked.

“He is not a joker” she said firmly.

The Chief Inspector scowled at her. “This is my police station” he said. “If I say he is a joker then he is a joker.”

“Mahalingam” he barked. “Is this fellow a joker or not?”

“I am not sure sir” said Mahalingam. “I will investigate.” He wrote something in his notepad.

The Chief Inspector scowled at Mahalingam. He turned back towards Vini. “Do you stay with this jo.. fellow? He asked.

“You stay at B-79, Koramangala?” asked the Chief Inspector.

“And you stay at B-79 Koramangala” said the Chief Inspector turning towards Veenu.

“On the ground floor” said Veenu.

“Then you stay together in the same house on the same floor” concluded the Chief Inspector triumphantly.

“Yes, but I don’t stay with him.” Vini was quite firm about it.

The Chief Inspector gave Vini one of his choicest dirty looks. “You think that the Bangalore police consist of a bunch of fools?” he shouted. He wagged his finger in Vini’s face. “I want straight answers from now on.”

challenge. The Chief Inspector’s blood pressure was rising. The doctor had advised him to stay calm. “Calm down” he said to himself under his breath. He closed his eyes and took a few deep breaths. He felt better now. He was ready to proceed.

“Housewife or working?” he asked Vini.

The Chief Inspector stared at Vini. Dare he ask her for how long?

“But I too got fired before I joined” said Vini quickly. She smiled sweetly.

The Chief Inspector scowled at her. This was not getting anywhere. He decided to skip the preliminaries and get to the point. He forced himself to smile at Veenu. “Ok. Tell me” he said. “What did you see yesterday?”

“Not much” said Veenu. “I got here yesterday and did not get time to see anything. Of course I did see the airport. Nice airport you have here. And I saw whatever I could from the car on the way to ITPL. It was a nice drive. Bangalore is a beautiful city. I saw some beautiful flowering trees along the way in Cubbon Park. The trees were fully covered with purple flowers with no leaves at all. Quite amazing actually. And then later I looked around a bit at ITPL. Amazing! Different kind of amazing than the trees of course. I was impressed by…”

Veenu stopped in mid sentence because he noticed that the Chief Inspector had put his head down on the table, his chin pressing against it. He had caught hold of the tufts of hair that were sticking out from both sides of his head and was pulling hard, as if he was trying to pull out his hair.

Veenu smiled. “Ah. That explains why his hair sticks out like that” he thought.

“Stop. Stop. Stop” shouted the Chief Inspector. He raised his head from the table. “In the night? What did you see in the night?”

“Oh? In the night?” said Veenu. “Vini took me to this really nice rooftop restaurant with this really interesting shop on the ground floor. Vini liked the translucent candles with the real flower petals encased in the wax. I wondered what happens to those petals when the candle burns. I think the petals might be catching fire causing the flame to change colors in interesting ways from time to time…”

“Stop!” The Chief Inspector’s head was back on the table and he was pulling his hair out even harder than before.

Veenu stopped. He thought he had been doing a good job of describing the candles. He looked quizzically at the Chief Inspector.

“Don’t make a fool of me” said the Chief Inspector in a low sinister voice. “I am not interested in candles. Tell me about the murder.”

“Yes” said Veenu. “It was gruesome. The Lava Crater Head Man killed the Software Engineer with a knife.” 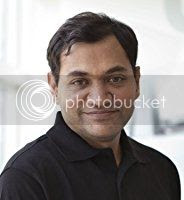 A computer geek with genes of a much awarded literary author, Ashish Vikram spent several years in the Silicon Valley and Bangalore building out software systems. The genes expressed themselves through the stories he told until they forced him to pen this novel. The result exceeds expectations with a 5 star rating from readers across multiple online book stores.