Tour Kick Off: A Fistful of Love by Om Swami 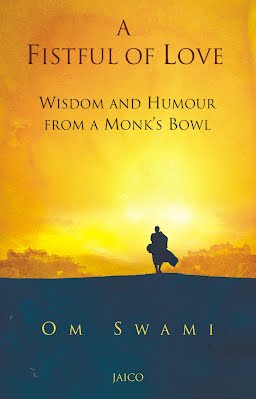 A man was sitting with his friends in a local inn. After a couple of drinks, he asked his friends, “Do you love me?” “Of course, we do,” they replied. “So do you know what I need?” No one answered. “If you don’t know what I need then how can you say you love me?” To love and to be loved is the most basic human need. No wonder we are attracted to people who give us attention, care about us, and love us. Yet, love also remains the greatest challenge in most relationships. Why? A Fistful of Love is a collection of insightful, thought-provoking nuggets of wisdom appreciated by millions around the world. This book is full of humour and narratives most beautifully woven into learnings of life that will make you stop and think. A must read.

Om Swami is a mystic living in the Himalayan foothills. An advanced yogin, Swami did thousands of hours of intense meditation in complete seclusion in Himalayan caves and woods. He has a bachelor’s degree in business and an MBA from Sydney, Australia.
Prior to renunciation, he founded and ran a multi-million dollar software company with offices in San Francisco, New York, Toronto, London, Sydney and India. An Australian national of Indian origin, Swami completely renounced business interests a few years ago to pursue a full-time spiritual life.
Swami’s memoir, If Truth Be Told; A Monk’s Memoir, was released by HarperCollins in December 2014. The memoir has had three print runs since then and has sold over ten thousand copies within six months of its release.

He is the bestselling author of Kundalini: An Untold Story. A Fistful of Love and If Truth Be Told: A Monk’s Memoir.

Swami’s blog, omswami.com, is read by millions all over the world.
Goodreads