PROMO Blitz: The Buddha Made Me Do It @marlamartenson #memoir #nonfiction #excerpt 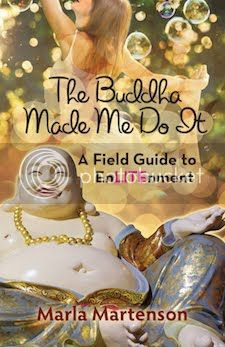 What starts as a search for a decorative Buddha statuette leads one woman on a spiritual journey that will change everything.

Marla lives the good life in Los Angeles—house, pool, her own business helping Cupid find love for LA’s most discriminating singles. Her handsome and ardent hubby Adolfo performs at an exclusive steak house in Beverly Hills. He tends to scoff at Marla’s green juice, vegan diet, yoga, and daily affirmations and can be a teensy bit of a control freak.

A discarded Buddha statuette that Adolfo suddenly can’t live without sends Marla searching through New Age boutiques along with her skeptical friend Julie. They are soon schooled by a charismatic “Goddess,” delving ever deeper into self-realization, conversations with angels, pendulums, candle “Magick,” Reiki, crystal healing, and more. Attend a Hindu Bajan? Sure. Orgasmic Meditation? (Wait, what…?) Maybe not that one.

Growing in her spirituality, yet exceedingly frustrated with some of her persnickety clientele—aging men who see themselves as Dorian Grays, worthy of exquisite young women—Marla’s world is shifting. She achieves certifications as an energy healer and encourages Julie to sample the concoction Julie calls “green gunk” and other healthy practices to help her conquer an addiction to unavailable men. Marla deepens her communication with the Beyond while Adolfo, always so practical, asks, “Have you lost your mind? Are you hearing voices? Angels aren’t real, come on!” Matters grow worse when certain psychics warn of “dangerous low-vibrational entities” and rabidly disagree with each other.

Her alternating universes give Marla spiritual whiplash, yet she discovers the LITE way to balance the human carnival with a transformational spiritual journey.

Glad that I wore a cozy sweater on that cold November evening, I walked with Julie down the long driveway. The temple was set up in a garage, carpeted and adorned with altars, statues, paintings of various saints, and candles, transforming it into a Hindu shrine.
We stopped at a sign posted on the wall outside. Women were informed that if they happened to be on their period, they should please sit outside in the driveway whilst partaking in the bhajan.
SERIOUSLY?
Julie and I gave each other a look that conveyed our mutual assessment: this is fucked up.
We seemed to be the first ones to arrive, and a wholesome-looking guy of about forty introduced himself as Ken and invited us to enter the garage/temple.
“Have a seat,” he said, gesturing to the floor. He and his wife would be leading the bhajan, he explained, adding that they had lived in India for many years, becoming enamored with the Hindu faith. Julie and I selected a spot near the giant statue of Shirdi Sai Baba and sat cross-legged on the floor. “We also lead fire pujas once a week. You must come.”
Julie and I were definitely interested in attending a fire puja, a ritualistic form of worship that has been used throughout the temples of India for thousands of years. The word puja comes from two Sanskrit words which together mean an act of purification of the mind, drawing in virtuous qualities while removing bad qualities or karma, essentially attracting positive energies and dissolving negativity.
Ken told us that Shirdi Sai Baba was one of the foremost sadgurus (a true guru) in India and lived in Shirdi, located in the state of Maharashtra, India for sixty years. It is said that though Shirdi Sai Baba is not alive in flesh and blood, he still lives and blesses his devotees wherever they may be. A large black and white framed photograph of the guru, sitting on the ground barefoot intrigued me. His hands, feet, and simple clothing looked filthy, a piece of cloth covered his head and tied in the back. His expression was serious and his eyes penetrating. The photo evoked someone who needed nothing, but had everything. I made a mental note to find out more about this guru.
A few other people finally arrived and took their places on the floor next to us. We chatted with a cute guy who was originally from Bulgaria and was a regular there.
“It’s very powerful to chant and sing with other beautiful souls,” he said. “I come every week.”
Ken and his wife, Lida took their seats in front of us, and passed out some instruments along with sheet music with lyrics so that we could sing along. I chose a tambourine, and Julie selected maraca made out of a gourd. Ken and Lida started the bhajan, Ken on the guitar and Lida on the harmonium, a reed instrument with a sound similar to the accordion. I was surprised at how small the group was, only half a dozen of us. We all chanted and sang in Hindi.
Om Guru Om Guru
Paragpara guru omkara guru tavasharanam
Sukhakarshubakar hey parameshwara
Brahma paraparta vasharanam
Om Guru Om Guru
After an hour, Julie gave me the look. It clearly said, okay, how much longer is this going to go on for?
I glanced at my watch and whispered, “Should be only another half an hour.”
We struggled on for another forty-five minutes as an Indian couple arrived, baby in tow, plates of food in hand. They placed the food at the feet of Shirdi Sai Baba and joined us in the chanting. Ten minutes later, three more Indian people arrived, bearing plates of food and placing them at the altar. Fifteen minutes later, four more with more food. Julie’s stomach growled. We squirmed. My butt was sore, and I longed to stretch. I was not feeling the uplifting love I’d come for. Seated right smack in front of Ken and Lida, Julie and I had to communicate with our eyes, strained looks, and subtle nods. The place was lovely, as well as the people, but this was definitely not our thing.
I finally mouthed to Julie, “I can’t take it anymore.”
Julie stifled a laugh, and rolled her eyes.
Ken shot Julie a look of disapproval.
I felt like I was fourteen again and back in Miss Judy’s dance class. My BFFs, Joni and Tracy, and I had smoked a joint in the parking lot before tap class and couldn’t stop giggling as we shuffled off to Buffalo. All the while a frustrated Miss Judy shot scowls of disapproval.
The memory triggered a giggle, which also set Julie off. Uncontrollable laughter welled up, and we buried our faces in our hands, attempting to stifle the guffaws and giggles. Ken was glaring at us. Some people just don’t get the Laughing Buddha.
I poked Julie in the side, “Come on, let’s go!”
We jumped up and flew out the garage door like Aladdin on his magic carpet.
Still giggling as we sped away towards Ventura Blvd., Julie turned to me, her face flushed. “Okay, Marla, that was painful.”
One more round of laughter burst forth, completely uncensored this time.
“It was truly not our thing, but I really want to go to the fire puja.”
“Are you kidding? We can never show our faces over there again.”
“I suppose not.”
And yet it had proven an excellent modality—the laughter, actually; the meeting, not so much. I felt spiritually juiced, happy, and terrific. I like to think our angels and guides were enjoying themselves with us as well. That bhajan was the epitome of the confusion of spirituality with serious disciplined self-control—even though we were sitting on the floor shaking gourds and singing what to us were mostly nonsense syllables. There should have been all kinds of laughter and light-heartedness at that session. The Buddha loves to laugh.

Born in Tacoma, Washington, “The City of Destiny,” Marla was destined to move to Los Angeles where she shoots her arrow of love on a daily basis as a professional matchmaker, helping countless couples connect with their soul mates.

She is the author of three memoirs, Diary of a Beverly Hills Matchmaker, Hearts on the Line and The Buddha Made Me Do It.

Her husband Adolfo has asked her, “Marlita, do you want to go to the moon too?” referring to her many interests—a true Gemini. Yet nothing has fascinated her like her profound adventure far beyond the moon and into the vastness of cosmic spirituality.