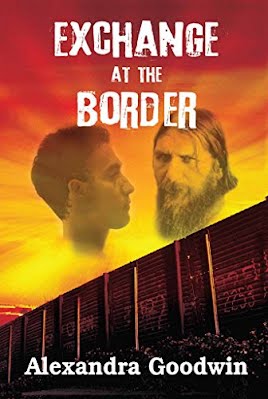 A BORDER CROSSING INTO UNMAPPED TERRITORY

Mexican agave farm worker Porro Camorra never meant to do anything wrong. He is in love with his girlfriend but when she becomes pregnant, his life is in danger. Fleeing the vindictive wrath of her enraged brothers who have sworn to kill him, Porro runs for the border. But when he reaches the barrier between Mexico and the United States, he finds more than the safety he seeks. As he is thrust into a mystical realm, he must agree to a fascinating and dangerous bargain in order to reclaim his place in the world. Vivid, inventive and suspenseful, Exchange at the Border is a thrilling and colorful exploration of the timeless battle between good and evil with a story and characters that will keep you spellbound.

It was close to noon, and the sun beat down on the desert. Despite the warnings, nothing could have prepared them for the merciless heat that awaited them. Some of them weren’t even aware of the thorns that stuck to their shoes and pants. Those wearing shorts got stung and had to stop occasionally to pull out the thorns.
One snagged Porro’s wounded leg, making the gash deeper and painful. Still, the group was upbeat. They were on their way to a better life, and all they had to do was plug along, one step at a time, each passing day bringing them closer to their dream.
Mecha and Gordo were sitting around a creosote bush, with a few acacia trees and tarbush providing a makeshift shelter. They began to weave dreams about El Norte. Lucas, their son, was well behaved. At some point, he wandered off into the brush to explore the surroundings. He imagined being the Lone Ranger on the lookout for Indians as he had seen so many times on TV. He ventured out a little bit more. Mecha took out some apples from her backpack.
“Why don’t you invite those two boys over, mi amor?” she asked Gordo. “I’ll check on Lucas in the meantime.”
“Sure.”
She disappeared behind some bushes while Gordo walked over to Porro and Marco who were sitting a few feet to the right. “You wanna join us?” he asked.
Marco smiled. Porro hesitated a little before getting up.
“I am Marco,” he said.
“And I am Porro.”
“Nice to meet you both,” he said. “You can sit with us if you’d like. We can eat together.”
Soon they were all catching up on their stories.
“I have a sister in Phoenix, Arizona,” Gordo started. “She went ten years ago, and she’s doing very well. She works for a wealthy family as a housekeeper, and she told us that her employers could use more help. The cook got married, and they asked my sister if she knew anybody that could replace her. She immediately wrote to us. We’ll have a place to stay as soon as we get there. I will take care of the yard and household maintenance, and our son will go to school with the gringos. He will be the first one in our family to get an education. He wants to be a doctor.” Gordo smiled at the thought.
Porro was about to say something when he spotted Coyote in between some branches in the brush. He got up and snuck toward the bushes. Gordo didn’t seem to notice. As he walked over to the spot, Porro heard the stir of leaves and then a muffled whimper. He tiptoed in the direction of the sounds. A few feet from where he was standing, Coyote was forcing himself on Mecha. She struggled, her body pinned to the ground while he thrust with force. Porro thought about his options. If he interfered and tried to save her, he would have to fight Coyote, and he was already a target thanks to Marco. Porro couldn’t afford to let anything or anybody get in the way of his reaching America. He needed to stay alive, and going forward toward Hope was his only option.
Mecha groaned, and Porro imagined if that were Azucena, he would want somebody to come to her rescue. He walked slowly toward Coyote, but Coyote sensed his presence behind him. Just as Porro reached to grab him, Coyote jumped away from her. He pushed Porro, causing


Alexandra Goodwin was born in Buenos Aires, Argentina, and came to the United States as a student. Now that her children are grown and seeking their own futures, she pursues her passion for writing under her mango tree surrounded by blue jays and red robins that come to nest every spring.
She escapes the Florida heat by immersing herself in the cool waters of her imagination, and creates worlds she hopes to share with her readers as they come to life. She lives with her husband Craig and their two white poodles in Coral Springs, Florida. This is her first novel.