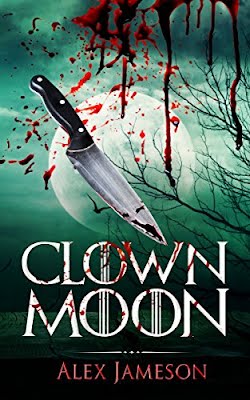 Former Marine sniper Sam Asher enjoys his casual civilian life. He’s content with his mundane job, steady girlfriend, and halfway decent apartment, until tragedy strikes too close to home, in a manner that appears to be related to a nationwide epidemic of creepy clown sightings.

Bent on vengeance, Sam hits the road to track down a deranged killer. Accompanied by his brother Jake, and pursued by an overly ambitious Homeland Security Agent, Sam will need to use every resource, every skill, and every friend he’s ever had to find the madman.

As the “clown crisis” ramps up, receiving constant coverage from the media and keeping regular folks hiding in their homes, a rash of murders takes Sam halfway across the country on his quest for justice. The battle-tested Marine will be sucked into a vortex of madness at the hands of a psychopath, engaging in a battle of will and wits that will test his heart, mind and loyalty.

Alex Jameson is a regular guy who happens to love scaring his audience and inspiring nightmares. His fantastic debut novel, Clown Moon, has been followed by a darkly humorous series, The 100 Deaths of Lucas Graves.