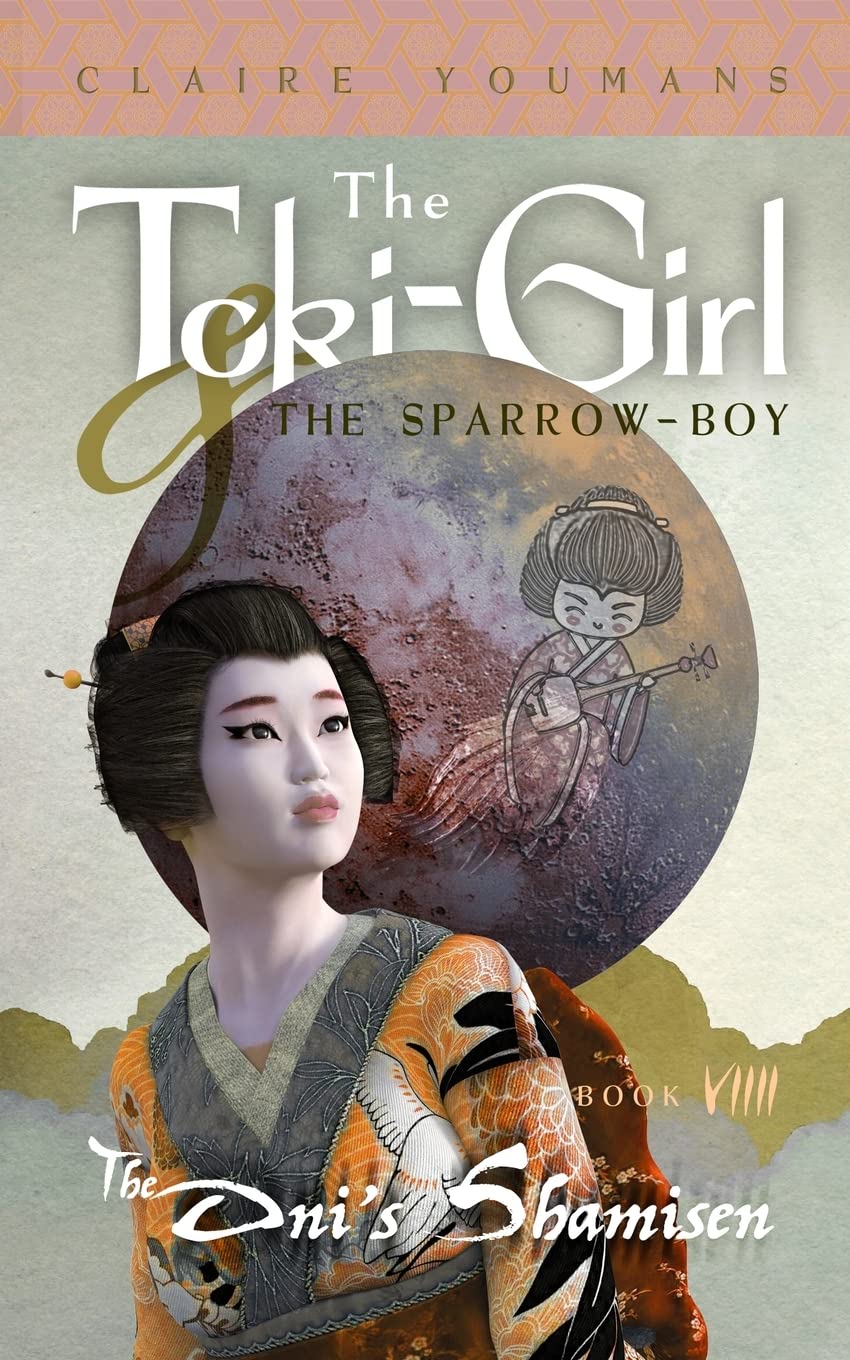 The Toki-Girl and the Sparrow Boy Series, Book 9

Japan, 1877. Toki-Girl Azuki revels in her new-found freedom. But now what will she do with it?

Using her patterns and the looms Western Dragon Prince Iyrtsh makes for Eastern Dragon Princess Otohime's ambitious project—resettling refugees displaced by the failed Satsuma Rebellion—anyone can make her fabulous fabric designs! But what of Azuki herself? Then the Oni, Kukanko, who is sure she's not a demon, calls on the Toki-Girl for help.

Can Azuki, Sparrow-Boy Shota, Dragon Princess Renko and Eagle-Boy Akira find a way to help the Oni? What will a blind musician accomplish using their results? How can they help Uncle Yuta and Aunt Noriko find places for newly freed mill workers with no place left to go? Or help Lady Anko and Lord Toshio defy convention and save their unlucky twins from potentially lethal superstition? What's going to happen to a very special horse?

Eastern Dragon King Ryuujin and Western Dragon Queen Rizantona contemplate the future of their species and the planet, and infant Dragon Prince Susu’s inability to keep a secret has catastrophic results.

Will Azuki and her friends find a way to help others while saving themselves, their friends, and their future? Can Azuki find a new path?

The Oni’s Shamisen is the ninth in the groundbreaking Toki-girl and Sparrow-boy series where History and fantasy and magical realism collide in this latest tale from the Meiji Era, a time and place where anything could happen and probably did!

Get the latest novel in this exhilarating series today!

Other Books in the The Toki-Girl and the Sparrow-Boy Series: 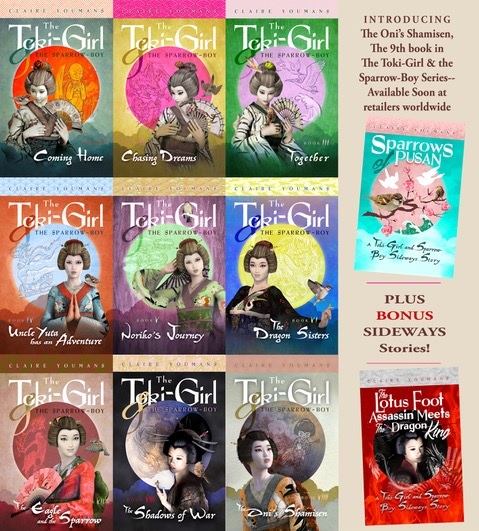 The Toki Girl and the Sparrow-Boy, Book 4: Uncle Yuta has an Adventure

The Toki-Girl and the Sparrow-Boy, Book 8: The Shadows of War 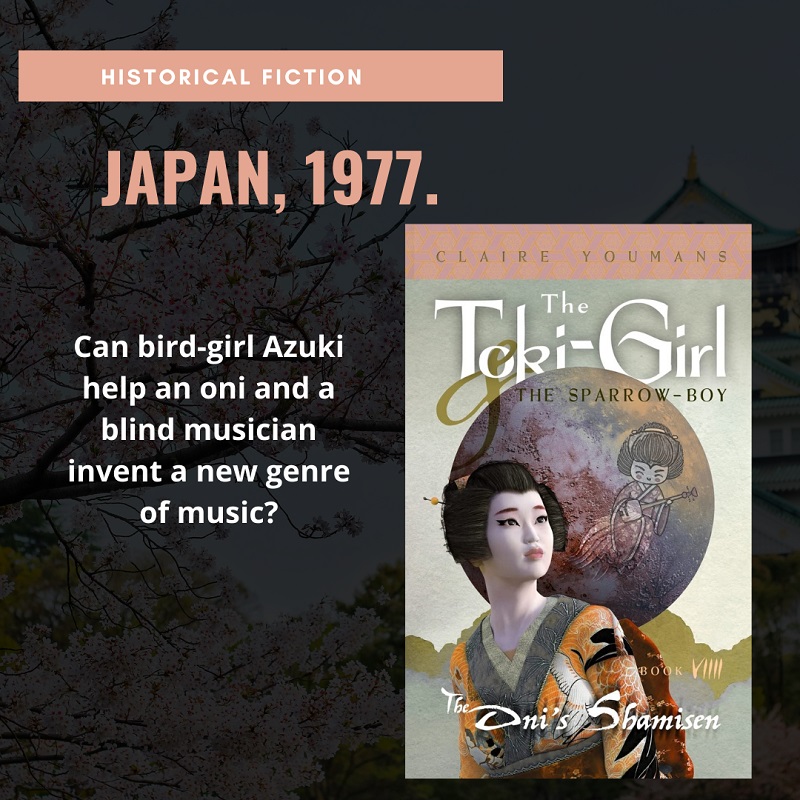 Azuki, the girl who became a toki, laughed as she soared in the thermal. In her form as a Japanese Crested Ibis, she rode the wind. Her powerful white wings, touched with stunning peach accents, worked to carry her far above the mountainous northern Kyushu landscape.

Laughing with her, Akira, the boy who became an eagle, matched her stroke for stroke as they circled each other, dancing in the air. They were close in size, for Steller’s Sea Eagles are proud of being the largest among eagles—no matter what those Harpy Eagles might think—and the Japanese Crested Ibis isn’t much smaller.

Dancing in the air wasn’t limited to birds, Akira thought as the wind softened beneath his wings—only to those who could fly. The Western Dragon Prince Irtysh and the Eastern Dragon Princess Otohime, though divergent in form, had learned to dance together, and Otohime had first learned to do it with her younger and smaller half-sister, their friend, Renko.

“Let’s dive,” Akira cried to Azuki. She didn’t answer, but slowed to nearly stall before tipping her long black beak downward and tucking in her wings. Akira drove the air with his own muscular wings to catch her, and they spiraled downwards, twisting closely around each other, racing towards the land.

They learned this from the dragons, who rejoiced in flight as much as the birds, and were smart enough and playful enough to take any airborne idea and expand on it. They all learned from each other.

As they approached the treetops, Azuki called, “Crossover!” and they changed their courses to hurtle past each other before starting the upward curve of their next ascent. Careful to keep exact pace with each other, they curved their angles inward so they would meet at the top of their arc. Akira thought they might cross over again and descend in lazy twining circles before landing.

Suddenly, right between them, a dragon appeared.

Akira and Azuki both dodged to avoid this obstacle, who was small for a dragon, though large compared to them. He was bronze, brown and gold, and in the classic European fashion, his hide was studded with jewels. When he was a human, he looked Japanese.

“Susu-chan!” Azuki called. “What are you doing here? Don’t pop in like that! It’s dangerous!”

“I wasn’t in your way!” Susu objected. Youngest of the dual-natured dragons, Susu was Renko’s full brother. Otohime was his much older half-sister, child of the Eastern Dragon King Ryuujin. Irtysh was his much older half-brother, child of the Western Dragon Queen Rizantona. Susu was a child prodigy who was afraid of nothing except his fierce and royal parents, and sometimes his grown-up siblings, who could be quite fierce themselves. Renko was young like him and would usually not only let him get away with tricks but teach him new ones. She’d been a child prodigy herself.

“That’s only because we’re good,” Akira said with a mental laugh as the two big birds circled around the hovering dragon. They all spoke in mental speech, convenient for times when their physical beings or their circumstances didn’t accommodate physical, audible speech.

“You did spoil our descent, though,” Azuki added. “Isn’t it good manners for dragons to announce themselves to avoid interrupting others?” Susu looked abashed.

“I should have,” Susu said. “I’m sorry. I forgot. I guess I did come in right in the middle. Is it convenient?” That was a popular dragon greeting. Dragons frequently spontaneously appeared in each other’s presences without announcing themselves in advance, which few of them could manage all the time.

Mental speech did not always work for any- and every-one or at different distances. Dragons vanished promptly if they were told to come back later. They enjoyed spontaneity and were sometimes impulsive. Susu, formally His Royal Highness Prince Suoh-Sugaar, certainly was.

“No, but as long as you’re here,” Akira said with a grin that forgave the dragon child too much and too often, “what can we do for you?”

“Not for me, but for Brother.” In the Japanese fashion, Susu usually referred to his relatives by relationship rather than name. He did have other brothers–both his parents had other children–but when he said “Brother,” as though it were a name, he invariably meant the one he was closest to: Prince Irtysh.

“How can we serve His Royal Highness today?” Azuki asked formally. She’d had just about enough of this childish nonsense. Susu was old enough to use proper manners!

“Did you know Brother has children?” Susu swiveled to try to follow the birds’ line of sight. Birds couldn’t hover like dragons could. “Come land on me!”

Azuki and Akira glanced at each other, then swooped in to circle before landing on Susu’s broad back.

“I never thought about it,” Azuki admitted. “They don’t live with him.”

“They’re kind of old,” Susu told them. “Grown-ups. They all have their own caverns and their own mountains. All over the place. Galina’s mountain is north of here, really close to Hokkaido! She’s a princess, too. She’s older than me, but we like to swim together. I think I’m her uncle.” Susu frowned at this. That didn’t make sense to him emotionally, though if he worked it out, intellectually, it did. His brother’s children....

“So Prince Irtysh has children?” Akira decided to move the original conversation back on track. He positioned himself to land near where Azuki would light down. While the prince was, by rank, His Royal Highness, he preferred a lower level of formality from those among the dual-natured and humans he seemed to consider part of his social circle, if not his friends. Akira didn’t know if he would ever be able to truly claim friendship with the suave and sophisticated dragon prince, though he admired him enormously.

“Five!” Susu said. “He’s talking to them about those machines he’s building for your refugees! He wants to know how many you’ll need, so I need to get Tsuruko-san. Then she and Kichiro-san can come back with us and we can all talk about going to the Exhibition! It starts in just a few days!”

Susu was a jump ahead of everybody, as he often was, Azuki thought, though he was frequently misdirected. Tsuruko-san, the Crane-Woman, was working closely with Her Royal Highness, the Eastern Dragon Princess Otohime. Both of them joined the fully human Lady Satsuki, her very pregnant daughter, Anko-sama, and all the rest of them, in helping to resettle refugees displaced by the Satsuma Rebellion. Azuki didn't want to think about that. The Rebellion was coming to its end, and its end would be, inevitably, tragic.

“That’s where we’ll find out about the cotton spinning machine.” Akira nodded. “I want to go, too.” 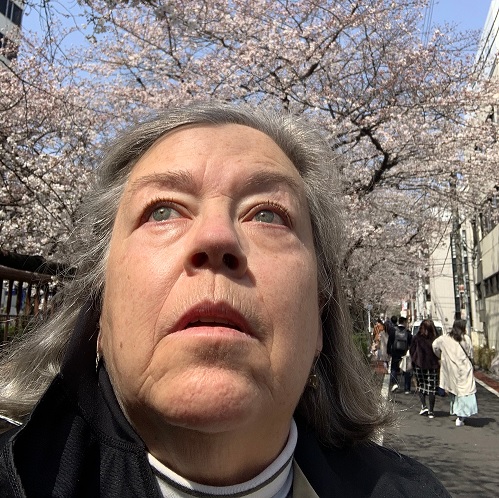 Claire Youmans was captivated the first time she set foot in the Land of the Rising Sun. After many years of travel to this magical place, the retired lawyer now lives in Tokyo, exploring and writing fiction and poetry. During the Meiji Era, Japan leapt from a decaying feudalism to a modern first world power. How'd they do that? This history holds a key to understanding Japanese culture and character. Like the ocean, Japan changes only on the surface while the depths remain the same. Using folklore and fantasy, Youmans tells this story in an accessible, fun, and exciting way that reveals and explores the true nature of Japan, a culture that is unique, quirkly and one she has ultimately come to love.