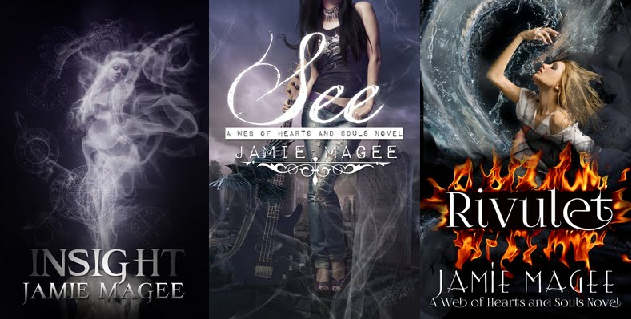 INSIGHT PROMO Blitz - February 27th
Willow Haywood has always been trapped between the worlds of the Light and the Dark. Her waking hours are plagued by her ability to feel the emotions of those around her. No matter how inward she draws, she cannot shut out the feelings of others. Sometimes she will see images - echoes of other people and places - that she can enter to influence the emotions of people she has never met.

By night, experiences her only escape from this terrible insight - entering into the world of dreams. Most of these dreams are shared in blissful silence with a stunning blue-eyed boy. But every new moon she lives through something much darker: a horrific nightmare shared by another mysterious boy who is always shrouded by shadows.

One night, this shadowy figure invades her dreams outside of his appointed time. In this new nightmare, Willow is marked; a mark which follows her into the waking world and sets her on a momentous path through light and darkness, through fragmented myth and half-truths, through past lives and disturbing family secrets, all in the face of the ever-dominant Zodiac. What she finds will endanger the lives of those closest to her and will force her to make a decision that will change her world forever.

SEE PROMO Blitz - February 28th
Forgetting who you are, your ambitions, your lover is crippling. Remembering, embracing your purpose with a new sense of determination is more than empowering. It's soul seizing. Charlie Myers is embarking on a life-altering path that will cause the damned to humble in silence…
One night, just a few friends how could it go so wrong? That was the question Charlie was asking herself when she awoke in the ER. Outwardly nothing was wrong with Charlie, she was a vision of perfect health, but Charlie knew something else was wrong, wickedly wrong. That fearful notion became even more gripping when her mind began to parade haunting visions of entrancing emerald green eyes, laced in black, before her. When she felt a hole in her heart, when the music she drowned her fears in began to amplify the ache in her soul, and caused her to crave an embrace she thought she never knew.
Charlie knew then that part of her was stolen. She was missing memories. Those memories were sacred. They held the key to her sanity. They told her that the sinister whispers, and the shadows that came to life before her, were not as ominous as she felt they were. They caused her to forget the one talent that allowed her to face the darkness that haunted her every waking hour. They also masked a much deeper bond, the face of the one that had stolen her heart, long before that tragically blinding night.
Charlie wanted to stay in NY, fight her demons where she found them, and ensure that her true home remained a sanctuary. Fate had a different plan in mind. Against her will, Charlie was sent to to live with her sister. Within that small town Charlie found her memories…and so much more.
Her story begins now.

Rivulet PROMO Blitz - March 1st
Unfathomable forces have always contested Genevieve Indiana Falcon, known as Indie. The curse of her cold touch entraps her just as the grief ignited in her past torments her. Yet, her mysterious ability to dream while awake saturates her in the belief that she was not always anguished. There is hope that one day a true peace in her soul can be found.

Foolishly, Indie assumes she has contained her life in an odd balance, and she cherishes the visions she sees of the enigmatic boy that held her in a lost time, but can never reach. She grieves for a life she fears she'll never possess, and that grief is a weapon she uses against her aunt who stands between her and her inheritance.

Weeks away from her twenty-first birthday, the date where she would assume control over her family legacy, a night terror robs Indie of the balance she was clinging to. Like the dream she had before she lost her family, it predicts a fatal catastrophe on the horizon. The fight between life and death, good and evil, began the moment her thundering heart awoke her.

Everything changed after that dream. The one thing that keeps her curse at bay is stolen, and then the enigmatic boy arrives in the flesh. Face to face with her fiery born-again lover Indie realizes that the only way she can prevent the tragedy before her is to surrender everything she was, is, and could be.

Can she bend the laws of nature and fight the improbability that fire and ice could ever be one? As far as Indie is concerned, there is not a myth, spoken fate, or curse that is stronger than her stubborn desire to have it all ... including him.

To sign up for this tour, fill out the Form by visiting this link: