An out of work actress can find herself in some shady situations. For Kitty French, some raunchy role-playing gone wrong lands her in the clutches of an honest-to-god vampire who decides she’s the tastiest of them all. Being a bloodsucker’s ongoing meal plan is not high on her wish list, no matter how searingly sexy he is. Will she escape from his cold lips alive, and will she still want to?

A bite sized, steamy, paranormal romance, Strawberry is a novella of 33,000 words, about a third the length of a normal novel.

EXCERPT
I was supine, pinned down, at the mercy of three vampires. It’s okay. They aren’t real. Just men playing a game.
A tongue licked across the lowest point of my neck, right where my pulse beat. A frisson of desire ran through my body, startling me.
They crowded around the table, crawling up onto it to get better access to me. A hot mouth sucked at the flesh of my right breast where the gown left it bare. I gasped at the sensation and then screamed. I wanted to strike the man off me but kept in character. This is what I was being paid for. I knew what I was in for.
Then the first man bit me.
They didn’t bite hard but they weren’t exactly gentle either. That’s going to leave a mark. I was sprawled on the table, teeth nipping at me in three places. Their plaything. I could feel arousal beginning and I could not believe it. It really had been a long time since I’d had any action. My nipples were hardening as the heated hands tangled into my hair and warm tongues slid across my skin. Fake fangs pulled at the bared flesh of my cleavage, arms and neck. Little shivers stole up and down my spine, making me whimper and a delicious ache built between my thighs. I had just about decided that I really needed to get laid when an icy finger ran up my thigh, yanking me out of the delectable stupor I had tumbled into. I felt a cold nose press against my neck and breathe deeply. I heard a small grunt of desire.
“This one is mine.”
My eyelids, gone heavy during the biting, slammed open to see my vampires falling back, their faces gone blank. It looked like someone had just reached in and erased them from within.
A new man stood above me, silhouetted by the dim scarlet glow of the lamp behind him.
The primal instinct to escape invaded me again and I tried to scramble back across the table, but the dead, cold hands dragged me back and up into his arms.
Then teeth sunk deep into my neck. 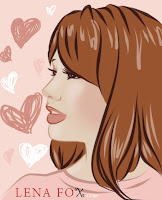 Lena Fox
Lena is addicted to treasure hunting in thrift shops, picking the twist in movie plots, and food. Lena writes romance because it’s So. Damn. Sexy. And a girl’s got to get her kicks somewhere.

This Blitz is brought to you by Reading Addiction Blog Tours, You can find the other blogs in this blitz Here.