Tour Kick Off: Fires of Man by @ReadDanLevinson 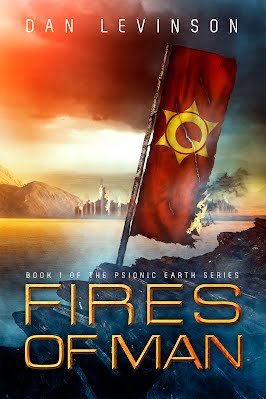 Supposedly the war between Calchis and Orion ended decades ago. But upon reporting to an isolated Orion army base for basic training, Private Stockton Finn learns the war still rages; only the weapons have changed, and Finn has been selected to become one of them.

Across the border, Calchan farm boy Aaron Waverly learns how determined his country is to win the war when he is abducted by a sinister government operative known as Agent. Trapped and learning to use deadly powers he's never before imagined, Aaron struggles to reconcile his ephemeral faith with his harsh new reality.

As the two nations hurtle toward a resurgence of open hostilities, Finn and Aaron, Agent, and two Orion officers and former lovers—Nyne Allen and Kay Barrett—must prepare themselves for the inevitable clash. Meanwhile, Calchan archaeologist Dr. Faith Santia unearths a massive lost temple in the frozen tundra far to the north, which hints that the brewing conflict may only be the first of their worries...