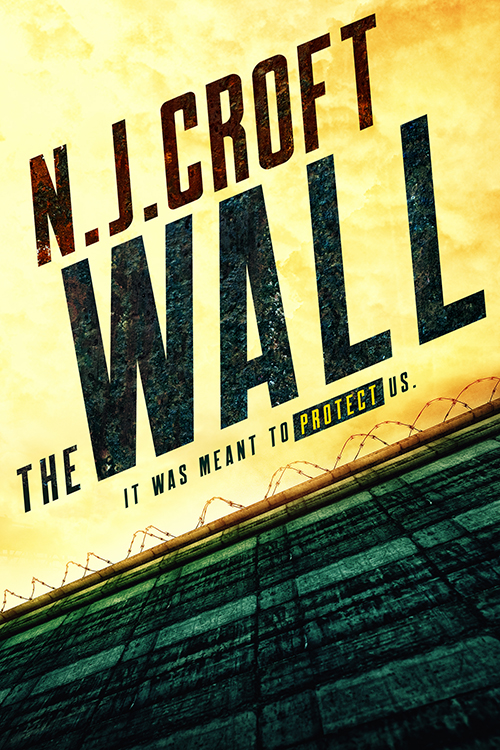 Set in an uncomfortably familiar future…

We built a wall to keep the dangers of the world out...but was it actually meant to keep us in?

Your every word is monitored. Your every movement watched.

And if you stay within the wall, the Loyalist Party will protect you.

Gideon Frome knows that safety is an illusion. Ten years ago, his perfect life was shattered, and he left Washington DC in disgrace, sentenced to serve on The Wall. He may be back, lauded as a hero, but he knows he’s only traded one prison for another, assigned a position to the infamous Secret Service.

Kate Buchanan uses her illegal predictive engine to monitor the “chatter,” flagging perceived threats to America. When the program suggests that nuclear war is imminent, and people around her start to die, Kate can no longer hide. She needs help, and it comes from the most unlikely place—Gideon Frome, a ghost from her past.

The American people thought they were safe, but it’s becoming shockingly clear that the price of safety is too high. And somehow, together, Kate and Gideon must tear down the walls that keep their country a prisoner.

Excerpt
Gideon shifted the weight from his left foot. His leg was beginning to ache, and he rubbed at his thigh. He’d taken a piece of shrapnel there five years ago, at the same time he’d gotten the scar on his face, and it still gave him problems.
How long until he could leave? Too long, at a guess.
Christ, had he actually enjoyed these events in the past? It seemed inconceivable. However, if he wanted his life back, he was going to have to suck it up and look like he belonged. Act like he belonged. And maybe if he did it long enough, he might actually feel like he belonged.
The problem was, he couldn’t bring himself to care.
The room was crowded. Anyone and everyone had clamored for an invitation to the party of the year. Plus, there were a large number of security agents. More than he remembered from the past. Men in the black uniforms of the president’s personal bodyguards—selected from the elite of the Secret Service—stood at the doors, while others mingled with the crowd. There was even a sniper on the second-floor interior balcony, covering the room.
Either Harry was paranoid, or there was an elevated threat level. If so, no one had told Gideon about it. That was hardly surprising; he suspected that no one, with maybe the exception of Harry himself, actually wanted him there.
But he wanted answers, and this was where he would find them.
Once he had those answers, then…
Who knew? Though revenge wasn’t the solution.
Most of the time he believed that.
Harry was making the rounds, shaking hands and smiling as he headed this way. Gideon wasn’t sure whether he would be acknowledged, but the president halted in front of him. He was flanked by two Secret Service officers, dressed in their black uniforms. Harry’s army, as they were known within the service.
He took the proffered hand. Harry’s grip was firm, and his smile was sparkling. Good dental work.
“Happy birthday, sir,” he said.
“Thank you. I’m glad you could make it.”
“I was grateful for the invitation, Mr. President.”
“We must all practice forgiveness.”
He could feel his muscles tightening. He’d done nothing that needed fucking forgiving. Neither had his father. For a second, he felt an echo of the dark anger that had been his companion for the first few years after his father’s death. He pushed it down and forced a smile. “Thank you, sir. I appreciated the chance to come home.”
“You’re a hero now, Gideon. You saved America from invasion. The people love you. We need heroes at a time like this.”
At a time like what? He’d seen the polls. There was a good chance that Harry would keep his position when—or maybe if—it came to an election. “Your approval ratings are higher than ever, sir.”
“Maybe,” the man mused. “But I’ve been feeling lately that they don’t appreciate me. That needs to change.”
“Yes, sir.”
“I must go now, but we’ll talk again.” Harry smiled and patted Gideon on the shoulder, and his guards stiffened at the contact. Christ, they were jumpy.
Gideon watched as the group walked away. Harry had always needed constant approval. It came from growing up in his father’s shadow; Harry Senior had been larger than life and an impossible act to follow. Charismatic. People loved him and would follow him anywhere. No doubt his son had always believed he was second-best.
Trouble was, he was right.

After a number of years wandering the world in search of adventure, N.J. Croft finally settled on a farm in the mountains and now lives off-grid, growing almonds, drinking cold beer, taking in stray dogs, and writing stories where the stakes are huge and absolutely anything can happen.