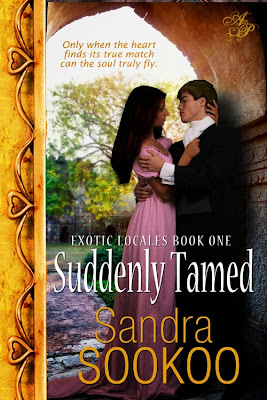 Only when the heart finds its true match can the soul truly fly.

Because of her… he believes in romance again. Captain Alan Tame is wrapping up the tail end of his commission in India. Just as he's convinced himself to return home to England and resume his life in Brighton, his gaze falls on an enchanting woman. He's captivated by one glance and the pursuit begins no matter that it's a crazy idea.

Because of him… her hope for the future is restored.  Devi Derbyshire is the daughter of an English military man and his Indian housekeeper. She knows exactly what she wants from life—a home, a family and the love of a good man. But her mixed heritage has clouded her options. One accidental glance across a ballroom gives her heart wings and her belly flutters.

Because of the magic of love… Alan cajoles Devi into a dance, and that one twirl about the floor leads to so much more. On a perfumed balcony, plans are made for an assignation in the courtyard, but before Devi can meet him, she’s waylaid and locked in a tiny room, leading Alan to assume the worst. Only the belief in true love will see them through.

At the end of a hallway that fed from the ballroom, a dark-haired woman stood, staring back at him. The sheen of her green silk gown glimmered in the soft candlelight, but it was her creamy, mulatto skin and glittering dark eyes that arrested his attention and sent his heart thumping back into painful life.
“Robert, if you’ll excuse me, I’ve just seen someone I must speak with.” He didn’t wait for an answer, but dashed around his big friend and tore down the hall as if he’d lost his mind.
Her eyes widened as he approached, but she turned and scurried off, deeper into the bowels of the house, away from the noise and congestion of the main party. The whisper of her skirts echoed in the passage.
“Miss, wait! I would like to talk with you,” Alan implored as he followed her. When she paused at the entrance of a study, he took advantage of the delay, caught up to her and grasped her elbow. “Please, tell me you name.” Though, what exactly he’d do with that information once he gained it, he didn’t know.
“I beg you, my lord.” Her voice was low and as lyrical as any of her countrymen’s. “Let me go and return to the party. I’m of no interest to you.” She attempted to pry his hand from her arm, but he refused to relinquish his grip. “Please.”
The soft-spoken plea, combined with the fear in her brown eyes, worked as a dash of cold water to his face. Alan let her go, but didn’t step away. “I apologize for the rough handling.” He trained his gaze onto her bare arm beneath the fluttering capped sleeve, hoping his over-eager grip didn’t leave marks on her smooth skin. “And by no means am I a lord.”
She blinked and the thick black fringe of her lashes brought his attention back to her glorious eyes. Those were eyes a man could easily fall into and drown. “Forgive my trespass. Nearly everyone I’ve met this evening is a titled Peer.” A tiny smile tugged at her full lips, lips that were stained dusky rose and invited either a bigger smile or a kiss.
The latter he couldn’t, in all good conscience, give—at least until they’d been introduced and alone—and even then it would push the bounds of propriety.
“Have a care, mysterious miss. Not all men are who they say they are, and many will invent a title to further a connection with an unsuspecting lady.” Though Alan wished to linger ever closer to her and breathe in the exotic floral scent she wore, he stepped back and put enough space between them to remain proper. Not that anyone had followed them to the study, but if he didn’t, he might give into the urge to sweep her into his embrace.
“Ah.” She crossed her arms loosely over her chest, and the silver and emerald beads along the bodice and sleeves twinkled in the low light. “Who do you tell people you are?” Her question, born on the wings of slightly accented English, wrapped around him as gently as being caressed with satin.
Warmth spread into his veins. She wished to linger in the hall with him instead of flee. Perhaps he wasn’t willing to quit the party so soon. “My name is Alan Tame—Captain Tame that is. I hail from Brighton, England.”
She swept her gaze over his uniform before holding his once more. “In the service of His Majesty?”
“For a few weeks more, yes. Then I plan to return to England and…” And what? He shook his head. “Well, it would seem my plans are not quite firm at the moment.”
“Perhaps that is a good thing, Captain Tame.” Her giggle sent waves of heat into every extremity. “A man who plans every second of his life cheats himself of the adventure he might find otherwise.”

Author Bio
Sandra is a writer of romantic fiction. In the past couple of years she’s concentrated on funny contemporary romance as well as Regency-era romance, but she will, on occasion, write paranormal or sci-fi. Whether you like sweet or erotic heat levels, there’s something for everyone to fall in love with.
When not immersed in creating new worlds and engaging characters, Sandra likes to read, bake, taste new teas, watch The Big Bang Theory and Psych as well as Finding Bigfoot, and travel. Her favorite place to spend vacation hours is Walt Disney World: it’s where dreams come true and the soul can play. When she’s not writing or inventing new recipes, she spends time with her husband—goofing off and making moments count.
Sandra loves to hear from her readers. You can write to her at sandrasookoo@yahoo.com, visit her website at www.sandrasookoo.com, or look her up on Facebook and Twitter.

This blitz is brought to you by Reading Addiction Blog Tours