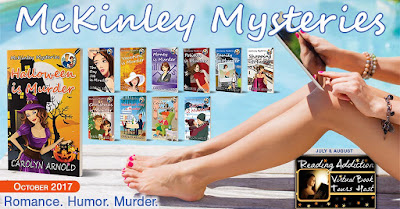 Romance. Humor. Murder. Are you looking for a murder mystery without all the graphic violence and foul language? Something that you can enjoy in an afternoon and walk away feeling good about afterward? How about a dash of humor and romance? If so, meet former detectives Sean and Sara McKinley. When a billionaire leaves them all his money, they no longer have to work, but they find themselves sticking to what they’re good at—solving murders. Undercover, off the books, and around the world, they’ll get to the bottom of things…and romance it up along the way.

This is the perfect book series for fans of Hart to Hart, Castle, Colombo, Monk, Rockford Files, Psych, and Magnum PI.

The Day Job is Murder 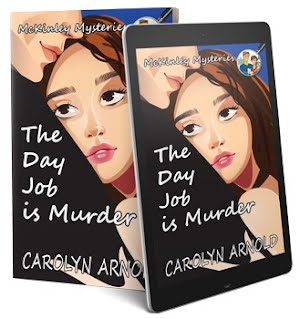 The bad guys aren’t the only ones on his radar…

For Albany PD homicide detective Sean McKinley, catching killers is the easy part of his job. Working next to his beautiful partner, Sara Cain, is what’s difficult. It might have something to do with the fact that he’s fallen in love with her, though. Fortunately, she feels the same way about him. But she’s convinced they should just be friends.

If only there was some way to change her mind… 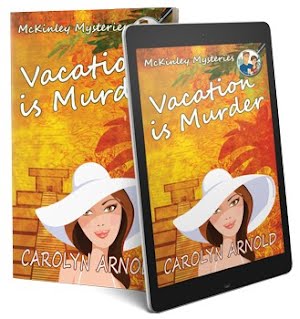 Vacation is Murder
This wasn’t in the travel brochure…

There’s only so much relaxation two former detectives can handle—even if they’re on their honeymoon. With their recent fall into money, Sean and Sara McKinley should be living it up, enjoying the sun and beaches of Cancun. But heading into their third week they’ve had just about enough lying around.

When the husband of a couple they’ve befriended is kidnapped and held for ransom, it has the McKinleys putting their experience to use. As they set out in the unfamiliar landscape of paradise, the investigation will have them risking their lives to stop a killer. 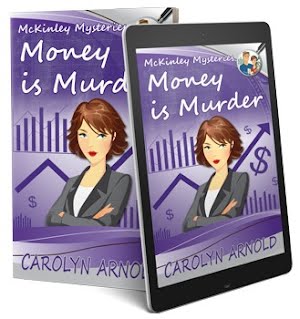 Money is Murder
It’s in the fine print…

Old Man Quinn left Sean more than his billions–he left him a murder to solve.

Inside the chest given to him from the executor of Quinn’s Will, Sean finds a key and implicit instruction that the contents are for his eyes only. After Sean discovers where the key fits, he finds another letter–Quinn wants a closed case reopened, and Sean is shocked to learn who the victim was.

As Sean and his wife, Sara, uncover clues, it leads them from the back rooms of Quinn’s corporation to the streets of New York City, but they will stop at nothing to get to the truth.
Major Retailer Links for this book: 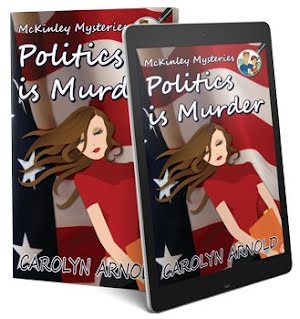 Politics is Murder
There’s no time for a debate…

Sean and Sara’s popularity as a murder-solving duo has gained momentum. But it’s not until it comes time for a local television interview that they meet Reanne Mable and end up finding themselves involved with a high-profile investigation.

Reanne is the sister-in-law of Albany’s Mayor Davenport and his daughter, Halie, has gone missing from her university campus. With a desire to keep the matter out of the media spotlight, Davenport turns to Sean and Sara to find her. But with the police already investigating the matter, taking this case would pit them against their friends from the police department, including their former sergeant Jimmy Voigt.

As time moves on, though, the fate of the girl is not up for a vote, and the McKinleys set out to find out what really happened. With the mayor taking the heat for a recently passed zoning bylaw, is an enraged small business owner behind Halie’s disappearance? Or did she simply grow tired of living in her father’s limelight and run away?

To get the answers, Sean and Sara will need to use all the resources at their disposal and may have to call upon their good friend Jimmy for help, after all. 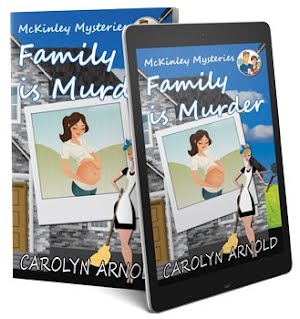 Sean and Sara McKinley put out an ad for a maid, but they never expected Sara’s birth mother to apply—or at least that’s who the woman is claiming she is. While Sean is suspicious of her true identity and motive, Sara opens her heart to the woman. But when a dead body turns up soon after Sara’s supposed mother takes off without so much as a good-bye, they both start to question the truth.

Could they have welcomed a killer into their home and not even known it?
Major Retailer Links for this book: 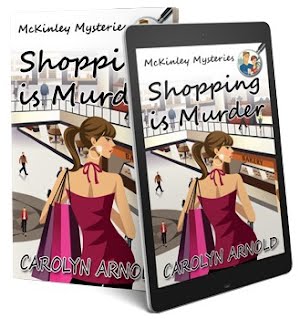 Shopping is Murder
They find more than a bargain…

Black Friday should be all about shopping and discounts, but when Sean and Sara only have a few more items left to buy, screams fill the mall—and for good reason. A man has fallen to his death from the second level.
But what exactly happened isn’t that straightforward, and normally, Sean and Sara would leave this matter to the police, but the widow was a childhood friend of Sara’s. While the police are leaning toward the belief the man intentionally took the leap, the widow is adamant her husband would never jump and asks Sara for her help.

Despite the fact there is an unresolved past between the friends—in which Sara feels she let her down—Sara can’t turn her back on her now. Fueled by guilt and the need to find answers, Sara convinces Sean they should look into the man’s death.

But the answers aren’t all coming quickly. Mall security has dropped the ball and there’s no seeming motive for murder. To find out the truth will take unconventional means, a little undercover work, and the help of their friend Jimmy. And if it all comes together, they just might have this case wrapped up in time for the holidays. Maybe even with a pretty little bow.
Major Retailer Links for this book: 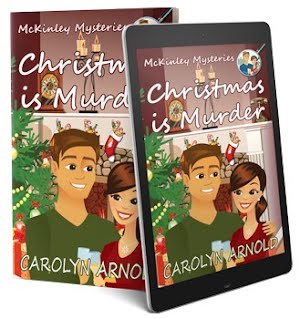 Christmas is Murder
Mistletoe and mischief…

Albany’s the perfect image of a winter wonderland, and Sean and Sara’s friend Jimmy is going to be Santa Claus for the upcoming Christmas parade. The trees and decorations have been selected and the gifts have been purchased. The season has truly cast its magical spell–until Sean and Sara’s neighbors die in a horrible house fire.

While the fire department ruled holiday-related hazards as the cause, Sara suspects there’s more to it. Her determination to find the truth has her and Sean toeing the line between what’s legal and what’s not.

As they sort out fact from fiction, the McKinleys make the final decision about whether or not they should open a private investigation firm.
Major Retailer Links for this book: 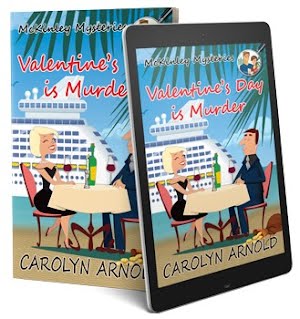 Jimmy finally takes a vacation–and a chance on love–only to be abducted. His female companion originally thinks he had cold feet about their relationship, but Sean and Sara know there’s more to it. Jimmy isn’t the type to just up and disappear, let alone leave a lady stranded.

Setting out on their private jet, Sean and Sara reach the tropical paradise of Ocho Rios, Jamaica with sightseeing as the last thing on their minds.

With a gold coin being their initial tie to Jimmy’s kidnapper, Sean and Sara even speculate about the involvement of pirates. Yet as the hours pass, and there’s no word from Jimmy’s captors, Sean and Sara will need to figure out the real motive before it’s too late.

With help from their friend, Adam, back in Albany, the pieces come together and not a moment too soon. 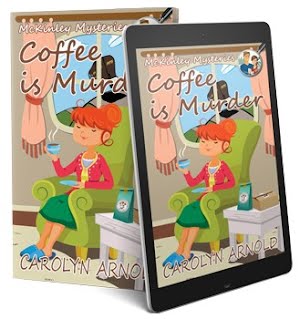 Coffee is Murder
A cup a day won’t kill you, but a few might.

Their first case as private investigators have Sean, Sara, and Jimmy neck-deep in coffee beans trying to find a killer. With their client certain that her mother was poisoned through her coffee of the month club, it has them setting out to Williamsburg, Virginia. But instead of approaching matters from the traditional standpoint, Sean and Sara brew a robust plot and stir Jimmy into the blend, all to get close to their top suspect and grind out the truth.

Going undercover at Tasty Beans, the coffee company, the three of them work to expose the culprit before anyone else dies. 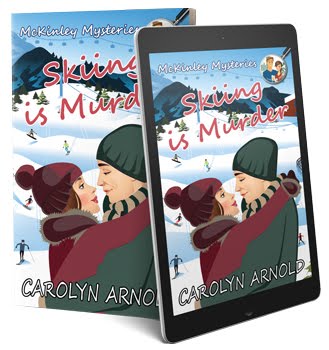 Sean and Sara are supposed to have a relaxing vacation in Vail, but it all goes up in a puff of powder when there’s a suspicious death on the mountain. And the deceased is not just anyone; it’s Adrian Blackwell, a two-time Olympic skiing gold medalist.

Rumor has it Adrian died in a skiing accident, but he was too skilled for Sara to accept that as fact. But she doesn’t want to disappoint Sean by ruining his ski trip, even though she’s convinced Adrian was murdered and she’s itching to find the killer.

Sean has never been able to say no to Sara, but this time he plans to. However, all it takes is a call from their PI firm back in Albany to change his mind. A job’s come in to investigate Adrian’s death, and his agent is the one footing the bill, leaving Sean with more questions than answers.

Yet one major problem remains: their New York State PI licenses hold no legal authority in Colorado. They still can’t help but look into Adrian’s death on the sly, though. This case will definitely involve some underhanded tactics, all while trying to dodge the local police over the course of the investigation.

CAROLYN ARNOLD is an international bestselling and award-winning author, as well as a speaker, teacher, and inspirational mentor. She has four continuing fiction series—Detective Madison Knight, Brandon Fisher FBI, McKinley Mysteries, and Matthew Connor Adventures—and has written nearly thirty books. Her genre diversity offers her readers everything from cozy to hard-boiled mysteries, and thrillers to action adventures.

Both her female detective and FBI profiler series have been praised by those in law enforcement as being accurate and entertaining, leading her to adopt the trademark: POLICE PROCEDURALS RESPECTED BY LAW ENFORCEMENT™.

Carolyn was born in a small town and enjoys spending time outdoors, but she also loves the lights of a big city. Grounded by her roots and lifted by her dreams, her overactive imagination insists that she tell her stories. Her intention is to touch the hearts of millions with her books, to entertain, inspire, and empower.

She currently lives just west of Toronto with her husband and beagle and is a member of Crime Writers of Canada.

And don’t forget to sign up for her newsletter for up-to-date information on release and special offers at http://carolynarnold.net/newsletters.