Tour Kick Off: Nowhere is Home Since You Left 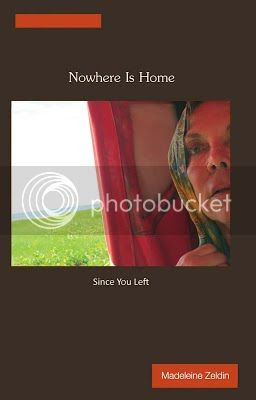 When her beloved soul friend husband, Gerald, passed away a few years ago, and her friends and sons moved to distant cities, she found herself alone for the first time in her life.

Gerald, a professional artist, had his studio in their home. Their home was always filled with family life, art, music, joy and playfulness in the garden.
After his passing, the silence was loud. The joy was gone — her paradise — a lost paradise.

She had two choices, either to fall apart or to get on with life.  She chose the latter and traveled to find a home, a community — however - nowhere was home - since he left.
In writing Nowhere Is Home … Since You Left, Madeleine Zeldin shares her insights, emotions, and true life experiences as she journeys solo throughout the years following the sorrowful death of her soul mate, internationally renowned artist, Gerald Zeldin. She presents years of storytelling based on travel journals she wrote while traveling to countries such as Mexico, Philippines, Ecuador, France, Spain, and California, U.S.A.  Zeldin also reveals the intensity of the pain and sorrow experienced in her grief, along with the fulfillment, satisfaction and logistics of international travel. In her travels she volunteered in the medical ﬁeld and gave help where help was needed. She brings inspiration to those of her generation, the 60’s, who find themselves alone.

Through her evocative tales of adventure, Zeldin reveals this life-changing knowledge to the world!

But ultimately where is Home?

Professionally, Ms. Zeldin has been engaged in nursing and teaching. She has successfully advocated for changes in the medical field, along with homebirth and Midwifery. In her travels to out of the way places, she has been a keen observer of people and distant cultures, often writing a 'sketch' of her experience.

Madeleine is an advocate of advocacy.

Madeleine believes we can all make a difference.

Throughout her adult life she has successfully advocated for change. When she felt change was needed, she rallied. She lobbied. She started a group or joined a group.

In the late '70's, when her town council was considering tearing down old heritage properties in the name of 'Progress', she helped start a group of interested citizens in order to save these heritage properties. 'Progress' was stopped and many heritage buildings were saved due to the group's diligence.

Again in the early '80's, Madeleine herself changed local hospital policy to allow midwives to accompany couples in the birthing room, after the hospital refused to allow her midwife to enter.

She belonged to a group of informed parents who advocated for changes in the policies for vaccinations.

Madeleine volunteered at the local Health Center and advocated for improved health care for refugees. Improvements were made.

She successfully advocated for her soul-friend, late husband Gerald's medical care throughout their six year battle with cancer. Many important changes were implemented in our medical system due to her persistence.

Madeleine has been ahead of her time in her generation. She had many professions throughout her life including social worker, teacher, registered nurse. She also joined a group of midwives and again successfully advocated for choices in childbirth.

However, she considers her most important achievement as being a mother and grandmother. She has instilled in her family a sense of love and empathy and has taught them to love the earth and its people.