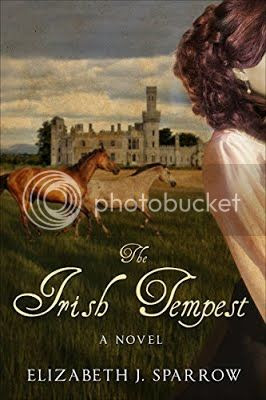 Ireland, 1911: After seven centuries of unyielding oppression, there is a tempest rising, a national yearning for Irish independence. It threatens to sweep away all that is precious to the very privileged O’Rourke and de la Roche families. Seismic changes are but a whisper away.  What begins as a squabbling friendship between the wastrel Courtland O’Rourke and the defiant, mischief-making Lacey de la Roche matures into a deeply passionate, tempestuous love, fraught with secrets of lethal consequences and sins of omission.
In this debut historical novel, The Irish Tempest beckons the reader into a world, where landowner and tenant farmer, the well-off and the working-class are chafing under the chokehold of British domination.
Pulled apart by personal and social conflicts, Court and Lacey experience the world from perspectives both transformative and destructive. Court, compelled to accept a commission in the British army, initiates a disastrous affair with rippling aftershocks. Lacey, fueled by the arrogance of adolescence, is beguiled by a charismatic but sociopathic horse trainer.
The Irish Tempest thrusts the reader into the anguish of the 1916 Easter Rising and beyond as Ireland seethes on the cusp of revolution.  Deftly paced with vividly drawn characters, The Irish Tempest embraces historical elements while preserving the essence of evocative storytelling.

Recent Praise for The Irish Tempest

"Once you start this novel, be prepared not to put it back down! I found The Irish Tempest to be a beautiful and well-written tale of friendship, revenge, love and betrayal. It's simply addictive and truly fascinating..." San Francisco Book Review

"Ms. Sparrow does a wonderful job of drawing you into this epic tapestry. It's a perfect example of its genre. I read it more as historical fiction than as a romance ... fans of both genres would enjoy..." Manhattan Book Review

"The fates of two families mesh with Ireland's struggle for independence in this debut novel. Using several historical events and a large socially diverse cast means that Sparrow must keep multiple plates spinning, and some plotlines and characters feel underdeveloped. Yet the author finds emotional resonance when her players intersect with history..." Kirkus Reviews

There is an inevitable forgetfulness that comes with inheriting a privileged albeit circumscribed life. When there is wealth and abundant resources to pass on to the next generation, one may forget that those ancestral woes—the devastation of blight and famine, the theft of birthright and property, the debasement of language and culture—still may claim a person, in the here and now of one’s very indulgent existence.

This particular life belongs to Courtland O’Rourke, a pretty young man of twenty-one, Irish Catholic in the truest sense with not a hint of Protestantism in his bloodline. The Norman and Scottish bits have been subsumed by the last one hundred years of vigorous Irish procreation. In the full bloom of youthful pomposity, he is returning to the provincialism of southern Ireland after a riotous month in London.

“Would you be good enough to leave them against the wall, out of harm’s way?” Court directed the sweating porter with a flourish of his walking stick, a fashionable affectation acquired in London. “My man seems to be delayed.”  He offered this with a resigned shrug, for after all, this was Ireland.

“To be sure, sir,” gasped the porter as the last trunk thudded against the peeling wall.

A few strides around the stationmaster’s bungalow confirmed to Court that Lafferty was nowhere in sight and that he was quite alone among the bursting daffodils and dusty sparrows of Cloonsheelin. This first warm day of April had cast an enervating spell over the normally peripatetic townsfolk. What a sorry homecoming after the exuberant din and vulgar delights of city life. Spirits lagging well behind him, he set off for Sully’s tavern, pausing to observe a panting mongrel have a go at McCarthy’s prized Irish terrier bitch.

“They’ll be a nice bit of fussing over this,” he called out to the writhing dogs.

Such hasty coupling kindled a wistful recollection of the women he had frolicked with in London. These sirens of wit and charm were so unlike the feckless girls he readily sported with in Cloonsheelin. The country rake, with gray eyes and unfashionably long black curls, immediately became the object of bold intentions after a discreet introduction by a conspiring acquaintance. Lured into escorting them to the races, tea parties, and shopping forays, he learned that daytime was the ideal time for romantic adventuring.

Distracted by this memory of scented bosoms and velvet thighs, Court wandered into a pack of jeering children, two of whom wrestled furiously in the dirt. His dismay turned to alarm when he saw thirteen-year-old Padraic Knox leaping with idiotic glee around the combatants. One wave of his walking stick scattered most of them into the shelter of the woods. Court seized the apparent victor by the scruff while sneering down upon the loser.

“What a sight you are to behold, Sholto Gallagher! Flat on your back—kicking like a squalling babe in a wet nappy! Be off before I give you a few more lumps to blubber about.”

The squirming victor attempted a final kick to Sholto’s fleeing backside but was deterred by Court’s grip.

“What’s this set-to about? And mind, none of your lies or you’ll be feeling the back of my hand.” Court demanded of the now subdued Padraic.

“Don’t be blaming Padraic! They started it!”

“Go on then.” He released his captive. “And I want the truth first time round. None of your shillyshallying.”

“We were off to Mrs. Conway’s for tea when they began ragging on us, for no reason at all.”

“You mean ragging on Paddy here! That godforsaken bunch doesn’t have the brass to mix it up with you. They’d not be wanting the bloody US cavalry on their backs!”

“But Court,” came the all-too-familiar whine, “they’re always ragging on him.”

“Don’t you think it’s a mighty queer thing to have this wisp of a girl do your fighting for you?” he asked Padraic with pitiless sarcasm.

“Oh, I don’t mind at all, Master Court. Lacey’s not afeared of anyone.”

“Isn’t she now? You know what I think, Padraic Knox? You’ve been smacked in the head a wee bit too often! As for you, miss…”

Both of her braids hung loose, and dirt and blood smeared her face, while the right sleeve of her shirt flapped in the breeze. It was Court’s shirt, a hand-me-down, as most of her wardrobe seemed to be these days. She was even wearing a pair of his old riding breeches with a strip of burlap to keep them from falling to her knees!

“You shameless savages are coming with me!” Court snatched their hands and Lacey struggled to keep up with his long legs. “You’ll be a lovely sight to greet your father with that black eye, my lamb!”

Perched on the table in Mrs. Conway’s kitchen, Lacey twitched under her ministrations while Padraic slurped tea and nibbled on a potato pancake.

“To think, during my entire stay in London, I did not witness a single display of brawling! Only to return and find you hammering away at a brute of a boy, like you were born to the underclass! How many times must you be told? Young ladies of breeding do not engage in fisticuffs with common thugs!”

“Don’t be impertinent!” Court hovered by Mrs. Conway’s elbow. “Shouldn’t she be getting a stitch or two for that?” His finger brushed away a lock of auburn hair from the jagged cut above her left eye.

“Ah, don’t be fretting so, Master Court. This here looks worse than it ’tis. Not deep, just messy. Bridget, fetch me the iodine and a bit of plaster.”

Eighteen-year-old Bridget Knox slunk away but not before cuffing her brother and inspiring Lacey to make some mischief. She was familiar with the rumors about Court and his sporting ways with Bridget and her ilk.

“What did you bring me?” Lacey asked as her prying hands fished through his pockets.

He bent close with a teasing smile. “Not that you’re deserving of my consideration. But if you were, and I happened to remember, it would be a might too big for my pocket, lamb.”

“Then who is this for?” She waved a gold necklace for all to see.

“You’re a thieving brat in need of a good seat warming.”

Court saw the rapt look of curiosity on both women’s faces. “No mystery, ladies. Just a trinket for Aggie. She’s been stuck with grandfather all this time, and you know what a bear he can be.”

By six o’clock, Lafferty had collected Court’s trunks and tracked him down at Mrs. Conway’s.

“Will we be stopping at Durbin House, sir?”

“No. Go straight on to Torrey Castle. Miss Lacey is to be our guest.”

When she began to protest, he hissed, “You’re under lock and key till your father returns from Dublin.”

“How do you know where he is?”

“I happened to have had supper with the captain night before last. He made a point of asking me to check on you—with good cause, I might add.”

Lacey sank back, her despair and pain welling into a single sob.

“I want to go home! I’ll not get into any more trouble.”

“If I thought you’d be properly looked after, I would! Old McTeague is too worn out to muster the strength to leash you. Indeed, you should be packed off to boarding school and taught to behave.”

This was not what she wanted to hear, least of all from someone who had spent the better part of his adolescence in disgrace, thanks to a hefty number of transgressions. She moved to the opposite side of the carriage and curled into a tight ball of woe.

Court’s left cheek began to pulse as he squinted at her in exasperation. Was it always to be this way between them? From the first day they had met—she, a stalwart five-year-old eager to ride and he, the fifteen-year-old reluctant teacher—they had squabbled and sparred with precious few interludes of peace.

“Look here, if you behave yourself for the next few days, you may come with me to Queenstown and meet my latest investment.”

“You bought a horse?”

“Aye, she’s a lovely little thing. Blacker than the devil’s brow with a sweet and steady gait. Grandfather will have a fit, but she was worth every shilling.”

“We’ll see,” he said, lifting his arm as she eased into the curve of his side. There was something seductive about these rare moments of harmony that made him susceptible to her manipulations.

“Will you unpack my present first, please?” She yawned in his face.

Elizabeth J. Sparrow is a native New Yorker and a graduate of Hunter College and New York University. She is working diligently on the sequel to The Irish Tempest.