Tour Kick Off: The Search for Diego by E. Paul Bergeron #historical 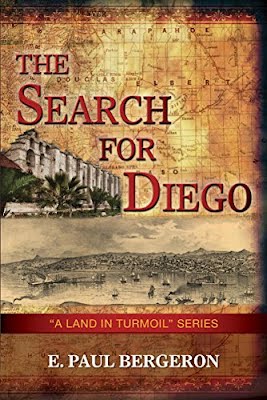 Without food or water, and with a child strapped to his back, William MacLeod searches for a way across the Mohave Desert in search of a route to the land called Alta California. But he is not welcomed by the ruling forces, and when his son is abducted by a fanatical priest, who believes the child’s soul is in danger, MacLeod finds himself confronted at every turn by autocratic officials in his search for his son in this vast empty land.

Across his path are thrown two women, one having been cast from her home by her family, and living in a stick and tule hovel, the other a beautiful young woman taken off the streets of Vera Cruz, who now lives among the elite of Alta California’s society. And standing between MacLeod and the end of his search is a Frenchman, who believes every challenge to his honor must be met by force.

If he is to find his son and return with him to his home in Boston, MacLeod must discover a way to overcome these challenges while staying out of the hands of the authorities.

E. Paul Bergeron is the author of historical novels covering the period of American history, between 1821 and 1870 in the Pacific Southwest.  His “Land in Turmoil” series depicts a time of significant change when this part of America went from Spanish rule through Mexican independence and annexation by the United States.

The author was born in the little French Canadian town of Mascouche, Quebec. Some years later they moved to Southern California where he became interested in the string of missions that were built in order to civilize the Indians and develop the country.