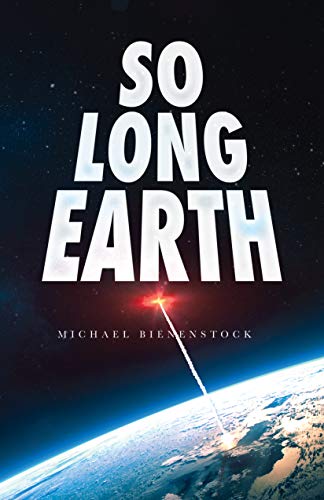 2017. Dr. Thomas Burns, an environmental engineer, is listening to the President, talk about global warming. He and his colleagues quickly realize that Earth will no longer be able to sustain life in a few years. Environmental disasters all over the world are occurring at a quicker rate, and each one seems to be stronger than the previous one. As a result, Tom begins to develop and carry out his plans to build 4 spaceships for 1,000 people each to leave Earth and travel to a new galaxy to find a place to live. The Russians, Germans, and Australians all agree to build spaceships and join Tom in search of a new home somewhere in the Alpha Centauri Galaxy.

Over the next 20 years of planning Tom along with his wife, Sarah, determined but naïve son, Sam, his loyal second-in-command, Bob Jackson, and an amazing medical doctor, Dr. Sato, Tom must wrestle with inevitable questions. How are they going to sustain life for such a long journey? How can they travel fast enough? Will the Russians fully cooperate? How will they be able to successfully launch four huge spaceships at the same time? Most of all, will they be able to save humanity?

Dr. Thomas Burns could not believe what he was hearing. He was sitting in a restaurant with his eight-year-old son Sam after attending a baseball game. The Colorado Rockies had just defeated the New York Mets by a score of eight to six. They were discussing the various players on the team. That was until the president started talking.

Listening intently to every word President Trump said on CNN, the environmental scientist shook his head several times. He’s appealing to every gawker of developers and brand-loving radicals rolling everything back—radicals who want to de-regulate, de-environment, just de-anything—and it was deflating, thought Dr. Burns. Decades of work falling apart for a new consensus, it seemed. Depressing.

Not only was the president waging a permanent delay of just about everything, while making money for his backers, but he was hoping people were going to do nothing about it. He was buying time for some of his obscenely wealthy investors and developers; that was all. They somehow pinned their losses in the previous years from failed deals and investments on anyone but themselves, despite how their investments were only about money, not about the major concerns of the times everywhere you looked. Having had a great outing with his son only moments ago, Dr. Burns fumed as he sat there.

The president was like the suits many in the rural parts of the Dakotas, Tennessee, and his home state of Colorado worried about. They were all caught up in their excesses, mindless to what life outside their air-conditioned life was like. Who cared how his message on TV was going to benefit neglected areas? He just expected people to deal with it. Except, this time, this suit, staring at Dr. Burns on the high-definition TV screen, was the one barreling his way at anyone who gave him a microphone like a dusted wagon train full of barons with money bags who pulled into town. And he’d be building what he knew best, a wall of heat for struggling people. They were less interested in tackling the daily concerns in their lives, finding no areas of concern in common.

Dr. Burns shook his head again. And the environment was a no-brainer!

Sam looked up at him momentarily, and Dr. Burns gave a half-reassuring smile. Sam returned his attention to his cell phone.

The president was unconcerned about whatever no man’s land was left in his wake of ruin while he doled out skepticism and disparaging comments when people needed reassurances and to feel confidence that the authorities were doing their best to keep them safe and secure. In the old Wild West, they used to blame the Yankee, wondering if somebody up in the skyscrapers meant them more harm than good. They just wanted the top suite.

Dr. Burns couldn’t stop looking from the TV to his son. He felt like he was falling into an abyss when he should have been feeling like he was there to share a moment of joy with his son.

He stood up, and despite his tall stature—he’d almost made it to varsity baseball years ago at six feet, two inches tall—he felt powerless. It was time to put the agreed-upon plan into action—at full speed. First, he gave his son some ice cream and told him to stay seated across from him, take out his Game Boy, and put his ear buds in, as he did not want Sam to be concerned about what he was going to discuss with everyone. He pulled out his phone and dialed a group text number, the specific code setting of a meeting of his peers. Tom raked his hands through his solid black hair, practically pulling strands out as he waited impatiently for everyone involved in the meeting.

Within five minutes, all of his colleagues around the world were on FaceTime. He’d been selective about which colleagues from Russia, Germany, Australia and America he involved in preparing the mission. Several of them had worked with him on projects at Boeing and others he had met at conferences around the world that had brought his attention to the staggeringly slow pace of applied research. He knew immediately what he wanted to say to the thirty people he’d reached. He trusted them. He sat back down as they met and discussed their plans.

Members from these four countries were going to be the first ones involved because they understood that to do nothing would ensure the end of the human race. These thirty people were the most esteemed researchers in their field of expertise. They published nearly 500 research papers researching climate warming and various environmental issues as well as future space travel. Russia as the leader in space travel was an obvious choice. Germany had some of the leading engineers in the world. Australians had suffered a great number of environmental disasters such as a deteriorating Great Barrier Reef and also had a large number of excellent engineers.

Tom, despite his anguish, spoke calmly. “I hope everyone was watching the president’s disgusting speech. Obviously, he is not going to listen to any environmental scientists or reports. We have no choice but to go ahead with our agreed upon plan. It is full steam ahead. We will have to speed everything up. Based on the environmental evidence and facts, the human race probably has 200 years—or less—to live. To survive, we need to find a new planet.”

Several of his colleagues made comments agreeing with Dr. Burns. They all agreed they would go home and start implementing the agreed upon plans.

With that, he ended the FaceTime meeting. He felt a spectrum of emotions including betrayal by the president’s actions and fear for his children’s future and the future of everyone else. He had hoped his family could grow up to lead normal lives, go to college, marry, have children and choose a career for themselves without worrying about the environmental disasters that were sure to take place. He also felt bad for just about everyone alive and every person yet to be born. Most people were going to face terrible hardships just trying to survive. Most of all, he felt determined.

He and Sam walked toward the exit. Tom waved goodbye to the woman behind the counter.

As his son closed the door behind them to the restaurant, Tom felt the cool night air, hoping his son wasn’t too cold given the temperature had fallen quickly. It was September and although it had been a mild seventy-five degrees at Coors Field, they had to walk a block to get to their car. He didn’t want to embarrass his son, so he just put his arm around him to keep him warmer. Sam didn’t protest thankfully.

As they made their way to their car, Tom couldn’t help but look at Sam’s baseball glove that Sam held loosely in his hands. He’d given the glove to Sam after his son refused to use his old worn-out one. Tom had used that glove as a teenager when he was about Sam’s age. He laughed to himself when he remembered Sam’s look on his face as he stared at Tom’s old glove. It seemed so important to him to give it to Sam, but Sam wanted his own glove.

Tom knew that Sam had loved the game that afternoon. Sam had a fantastic baseball card collection and recited stats that baffled Tom, who also felt proud of his son for knowing and memorizing all kinds of stats. Seemed like the type of thing kids should be worried about in high school, not what was weighing on Tom’s mind. Tom shook away a bunch of thoughts. He still wanted to look like he was enjoying himself after he and Sam had watched their favorite team win and ate at their favorite restaurant. But that damn television and the news. He was overcome with concern and resentment, knowing that his son’s future was going to be nothing like his own.

Sam said, “You know my good friend Kory just made varsity, and I heard that there were even some top university recruits watching. I hope when I get to high school, I’ll play that well.”

Tom stared at Sam momentarily, masking the welled-up feeling of regret and sorrow that threatened to silence him, before he said, “Sam, you’re going to play with the best.”

He unlocked the car door, and they headed toward Interstate 70. All the while, Tom was glad that he had reached an agreement with his colleagues that there would be no more delays, no matter what lay ahead.

And so, it began. 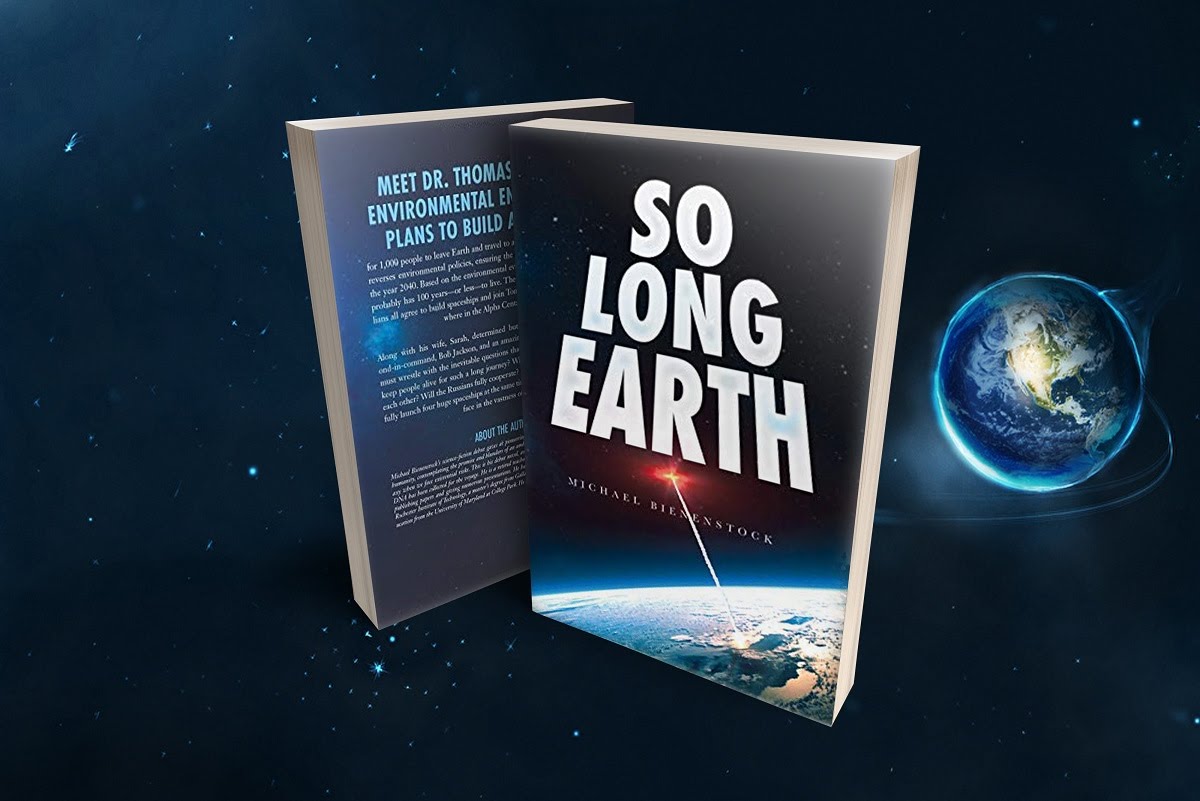 Michael Bienenstock is a retired teacher with over 35 years of teaching experience. He has published papers and given numerous presentations and earned a Bachelor of Science degree from Rochester Institute of Technology, a Master’s degree from Gallaudet University, and a Ph.D. in Special Education from the University of Maryland at College Park. He is married with one son and lives in Florida. So Long Earth is Michael's debut novel and no, his clone did not write this book.