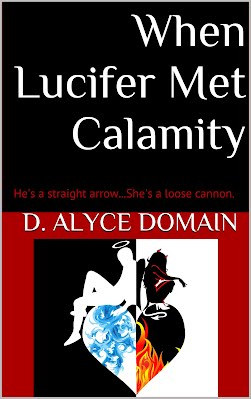 Lucifer - At eighteen months out of law school, six months on the job, and four weeks before his BAR exam, Luce has arrived. He’d been playing by other people’s rules all his life and now, poised on the brink of success, he will not let anyone stand in his way…especially not the junior-partner jerk at the office giving him and his assistant a hard time. On his way to give the creep a piece of his mind, he bumps into the infamous ‘Calamity Jones’…
Calamity – is tired of enduring her boss’s unwanted sexual innuendos.  When his fingers start to roam, Calam decides she’s had enough. It’s time to fight fire with fire.  So she devises an ingenious, if risky plan, to get Perkins off her back, keep her Job, and strike a blow for his numerous other victims around the office…only, things don’t go exactly as planned.
All Hell Breaks ‘Luce’ – After finding the loopy ingénue jack-knifed atop the archival files, Lucifer knows something is up. Calamity knows the jig is up. So, she comes clean. Turns out, they both have the same problem…Perkins. But, sparks fly when they decide to team up to bring down the boss. The Hitch? He’s a straight arrow…She’s a loose cannon. Can they work together to achieve a common goal?  Or will they both lose in the end?

D. Alyce Domain. Is a long-time lover of creative fiction.  She learned to read with Dr. Seuss, grew up reading Sweet Valley High, James Howe, and Lois Duncan, and graduated to category romance with Harlequin and Silhouette in her teen years.  Ms. Domain started out writing fan-fiction after her favorite fictional characters met with death and cancellation on network television.  Inspired by the entertaining, multi-layered storylines created by so many female romance, young adult and television writers, she began to experiment with her own characters.  Coupled with her own unique brand of genre-bending romantic fiction, Ms. Domain was able to create a whole new world within the pages of her books.
Ms. Domain was born and raised in Houston, Texas, the youngest daughter of Charles and Eunice Domain.  She has one older sister.  She earned a BS in Biochemistry and a MS in Biomedical Sciences.  She worked in Patient-Based Biological Research before switching careers and opening her own fashion boutique, The Aesthetic Domain.  In addition to fashion apparel and accessories, she sells her own original jewelry creations and runs the Boutique & Blog website, which is based in Houston, Texas.  Ms. Domain also has avid interests in inspirational music, art/entertainment, and history.