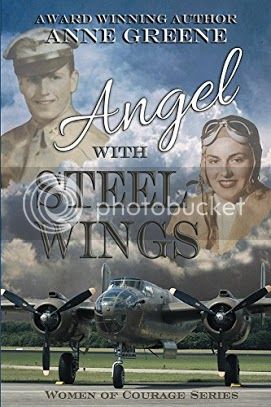 At a time when most people in American have never flown in an airplane, spunky Mandy McCabe test-pilots repaired war planes as part of the Women Air Force Service Pilots. If the Army Air Corp shuts down the WASP program, she must return to life in her hard-scrabble home and face her past.

DESPITE THE RAGING WAR

This World War II romance shows Steel Magnolias meeting Band of Brothers. Can Mandy escape from her past? Can a man burdened with memories of death agree to added danger for the new woman in his life? Will their new love survive the test of opposing desires and the pain and separation of war?

“She’s late! Where is she?” Insides churning like pistons, Major Harvey Applegate stared hard at the tiny blonde standing in front of him, her hands clenched behind her back.

Her chin trembled. She looked so young he wanted to pat her on the back and send her to the hangar for a hot chocolate, but majors didn’t do that. So he gritted his teeth. He was supposed to show respect for the WASPs invading his air base. That was asking a lot. They were young and unpredictable. Men fought wars to protect American women. Men died in wars. Not women. He restrained his impulse to pound the metal side of the wet hangar and slapped his thigh with his cap instead.

“I can’t lose another WASP on my watch. Not two in as many days.” He plowed his hand through his short, dripping hair, frowned, and reminded himself not to get his underwear wrapped around an axle.

“Didn’t that pilot get the word this morning?” Harvey wrung his cap. He wouldn’t take his temper out on this innocent blonde.

“No, sir. Corporal Jones ran up to tell me we were grounded twenty minutes after she was in the air.”

Above the wail of the wind, Harvey picked up the faint lilting song of a Merlin engine running slightly rough. He gazed toward the windsock blowing straight out and pivoted toward the landing strip. A P-51 came in fast and low, circled the field, made a perfect three-point landing, and taxied to a halt.

He snapped his cap onto his head. He didn’t have many men who could land in a crosswind that well. Even he would have had trouble. Boots splashing water, he dashed across the tarmac and reached the craft before the propeller stopped spinning. The canopy of the single-seater flew open. A slight figure, clad in a man’s too-large flight suit, climbed out onto the rain-slick wing. He stretched up his arms and grabbed her waist to lower her to the ground. Even with the weight of her boots, flight jacket, and gear, this one felt light in his arms.

The pilot glanced at his insignia. If she’d actually been military, she’d have had to salute. But she wasn’t, and she didn’t. The minute her feet touched ground, the slender woman pulled off her goggles and gazed up at him. Wide blue eyes circled with goggle marks.

Another starry-eyed angel. Harvey swallowed hard. His chest hurt. She looked so vulnerable.  He scowled, picturing that slender nose smashed and those winsome lips closed forever. He couldn’t face seeing another woman killed. He wanted these women off his air base. Wanted no more sleep lost over these young ladies. Wanted no more sending them into danger. Wanted no more funerals that tore him apart. He slapped the cowl of the plane so hard she jumped. No more charred women in downed planes. Trista took on a man’s job, and look how that turned out. Agony pierced his chest. He shook his head, trying to dislodge the memory.

“I’ll see you grounded!” Harvey thundered. “You were due back half an hour ago. Can’t you women obey rules?”

Ruby lips rounded into an O of surprise. Her sapphire eyes widened. Her dark brows arched. “What?”

“Women pilots!” He slammed his fist into his palm. “I’ll shut down this program.”

Her brows furrowed. Her chin poked out. Her hands flew to her hips. She looked ready to jump all over him. As long as she was alive and safe, he didn’t care. He could handle her. “You head-in-the-clouds dreamers think you’re on your own private missions. This base is no place for a woman!”

“You men have such a high opinion of yourselves. Women could fly in combat, but you keep us home.” Flames tinted her wet cheeks. “You won’t admit our country desperately needs us to fly these planes.” She stressed each word passionately.

Harvey could tell she wanted to say more, but she clamped her lips. He glared.

Tough if she thought he had an inflated opinion of himself. Better that than for her to guess he had a soft spot for these female pilots. “I don’t want any more dead women.”

She cringed. Her face crumpled.

Why hadn’t he kept his trap shut? Even on a base this big, she probably knew the missing WASP pilot. But he’d wanted to scare her into obeying the rules. Obedience gave the women pilots some semblance of safety.

She recovered from her first reaction and blazed. “Connie’s alive. I know it. And rumor patrol says it’s just a couple of you big shots who want to shut us down. Most fellas like us testing repaired planes and towing targets. They want to be free to fly combat.”

He shrugged. She was right. And he couldn’t dredge up a comeback.

She stomped stiff-legged toward the open hangar door, parachute bumping her backside, rain blurring his view.

“Feisty pilot, you’re the kind gets yourself killed,” he yelled just as she reached the hangar door.

Anne Greene lives in the quaint antiquing town of McKinney, Texas, a few miles north of Dallas. Her husband is a retired Colonel, Army Special Forces. Her little brown and white Shih Tzu, Lily Valentine, shares her writing space, curled at her feet.

Anne’s an award-winning author of twenty-three books. She loves writing about alpha heroes who aren’t afraid to fall on their knees in prayer, and about gutsy heroines. She hopes her stories transport you to awesome new worlds and touch your heart.