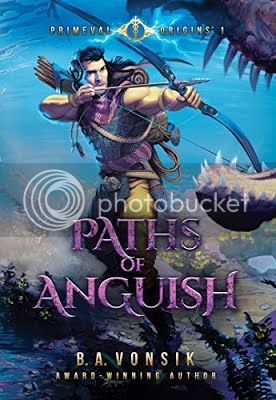 Primeval Origins: Paths of Anguish (2nd Edition) - Book one in this epic story of mankind's origins and the creation of the Four Horsemen. Join Nikki, a graduate student working on a field expedition that turns her life upside-down, as she learns of and experiences our undiscovered and hidden history filled with terrible tyrannies, deadly dinosaurs, brutal beasts, ancient gods, and heroic hearts  as the origins of our End Times is revealed, answering the question, "What if all of our myths and legends are true?"

Myths and Legends...just fables and fantasies for those taught to scoff at them is d, as I was taught when a graduate student in the sciences; scorn and ridicule the forbidden. Myths are just...myths. Legends are just...legends. Then, I discovered different, in a South American dig where my life went upside down after finding what should not be with what we thought we knew so much about. My consciousness, my Light, plunged through a maelstrom bound to those of our undiscovered history. I witnessed through the eyes of ancient warriors, Rogaan and others, a wondrous human civilization of old, grand beasts and dinosaurs, and celestial gods of myth in what the modern Hopi and Maya branded our First World-Age. An age deep in blood and conflict born of gods and new man covetous of true powers and self-motivations loosing upon their world tyrannies, energy forces...sorceries, and abominations affronting Creation. Sealing the fates of the age, sword-messengers, warrior angels, risen new to bring forth the Harbinger of Creation's Judgments, slayers of civilizations...both of men and gods, the Horsemen. I am bound to them. In the here and now, standing at the precipice at the end of mankind's Fourth World-Age, I fear what is to come from the others...the Horsemen of Prophecy. And yet, I have hope for what follows. As our ancients did in tablets of clay teaching us our undiscovered past, I Nikki, now share these steel bound epics with you before the sounding of the trumpets.

Other Books in the Primeval Origins Epic Saga

Primeval Origins: Light of Honor is the second book of the epic origins story of mankind, our heavenly hosts, and the eternal war between good and evil where all is revealed, through characters both past and present, and tellings of humanity's heroic struggles against terrible tyrannies, deadly dinosaurs, and ancient gods answering the question, "What if all of our myths and legends are true?"

Fleeing across the sea from enemies familiar and unknown, the crew of the Wind Runner and I fight for our lives as we struggle to keep safe our strange and ancient cargo, the unconscious Rogaan and Aren. We have need the help of these warriors of old as we battle deadly Tyr super-soldiers of the New World Order, now commanded by the forces of the Crescent Moon, intent on taking our ancient cargo for themselves. I suffer horribly the wrath of the Tyr when protecting the unrisen Horsemen, hurling me to the brink of death and back into the ancient world of mankind’s first civilization, reliving the past through the eyes of the then young and aspiring warrior Rogaan and the mystic Aren. As my Light, again, plunges into the maelstrom of our deep past experiencing a culture both simultaneously primitive and advanced, as our ancient ancestors struggle against self-corruptions and unseen powers born of jealous entitlements by their celestial gods and unknown intelligences. In these remembrances, I am witness to terrible injustices and impossible trials levied by the covetous tyrannies against Rogaan, Aren, and many others. In the here and now, I find rising deep questions about humanity’s origins and the seemingly eternal battle between the goodness of the Light and the selfish evils of the Darkness. I, Nikki, now standing at the precipice at the end of mankind’s Fourth World-Age, bare testimony of our undiscovered history, in these blue steel epics, revealing the origins of the Horsemen of Prophecy… before the sounding of the trumpets..

Primeval Origins: Rise of Serpents - Book three (#3) in the epic story of mankind's origins and the creation of the Four Horsemen. Join Nikki, a paleo-archeologist graduate student on a field expedition, discovering our hidden history, turning her life upside-down and sending her on the run from unknown deadly forces, as she learns of and experiences our undiscovered history filled with terrible tyrannies, deadly dinosaurs, brutal beasts, ancient gods, and heroic hearts as the origins of our End Times is revealed, answering the question, "What if all of our myths and legends are true?"

Seeking refuge from the relentless hunt, we evade the gathering forces of mankind and their guiding masters…the Serpents of Old…the Watchers of humanity. Knowledge and advancements fashioned for humanity’s betterment now turned foul by lord and servant alike, subjugating all to the ever-present examination of the surveilling State. Mankind’s self-subjugation rendering themselves as slaves to the unseen few, who only allow freedoms to peoples paying homage to their institutions of cunning tyrannies. Subtle guidance by the ancient scales now coil tightly about their corrupted human tools to deliver to them the World in arrogant defiance of Creation. It is in this confrontation, I vision the origins of the Old Serpents…in our first civilization, seeing their Lights twisted and fouled by selfish wants and the corruptible doings of their divinities. Their ancient bane…the Horsemen, I see rise, then as now, who through deeds self-driven and compelled leave in their wake punishing destructions as they seek to halt corruptions both mortal and afar. I sense I play a part in the approaching Apocalypse, through my aid to these Horsemen of Prophecy and something more. As I stand at the precipice to the end of the Fourth World-Age of humanity looking out at the coming tempest, I, Nikki, now do as our ancients did in tablets of clay and stone, chronicling humanity’s undiscovered past in these steel bound epics to share with you before the sounding of the trumpets.

B.A. Vonsik graduated from the United States Air Force Academy and served as an USAF Special Operations aviator. Currently, B.A. Vonsik works in the training and simulation industry by day while at night and all other times detailing the world of Primeval Origins with new discoveries and research in ancient mythologies, creation myths, religions, sciences and technologies. Starting with a curiosity about why many of our mythologic pantheons seemed very similar, B.A. created the Primeval Origins story based on more than 25 years of research integrating our mythologies, ancient alien theory, history, the sciences, and with the stories of the Bible, Qur'an, and Hindu religions. B.A. Vonsik lives with his extraordinary wife in Florida.