Tour Kick Off: BRAIN by @CandaceBlevins 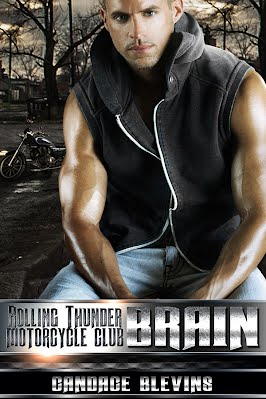 Someone has hacked past Brain’s firewalls and sold the MC’s information. Brain and Bash are on a mission to catch the hacker, find out who hired him, and then make him pay.
Until Brain discovers the hacker is a woman, and just as smart as him. She’s so clever, he chases her a full week before he finally catches her.
She’s the enemy, and yet his wolf wants to protect her from Bash. Worse, his wolf is beginning to decide he wants to claim her.
This isn’t going to be pretty.

Warning: Fights with full-on violence and lots of blood, as well as descriptions of horrendous tortures to a captured female.

Candace Blevins is a southern girl who loves to travel the world. She lives with her husband of 17 years and their two daughters. When not working or driving kids all over the place, she can be found reading, writing, meditating, or swimming.
Candace writes BDSM Romance, Urban Fantasy, Paranormal Romance, and a smoking hot Motorcycle Club series.
Her Safeword series gives us characters who happen to have some extreme kinks. Relationships can be difficult enough without throwing power exchange into the mix, and her books show characters who care enough about each other to fight to make the relationship work. Each book in the Safeword series highlights a couple with a different BDSM issue to resolve. Books are standalone and can be read in any order, with the exception of the two Davenport books, and the fourMatte books.
Her urban fantasy series, Only Human, gives us a world were weredragons, werewolves, werelions, three different species of vampires exist, as well as a variety of other mythological beings.
Candace’s two paranormal romance series, The Chattanooga Supernaturals and The Rolling Thunder Motorcycle Club, are both sister series to the Only Human series, and gives some secondary characters their happily ever after. Her three paranormal series are written so you can read one series, or all three, should you prefer only a particular genre.
You can visit Candace on the web at candaceblevins.com and feel free to friend her on Facebook atfacebook.com/candacesblevins and Goodreads at goodreads.com/CandaceBlevins. You can also joinfacebook.com/groups/CandacesKinksters to get sneak peeks into what she's writing now, images that inspire her, and the occasional juicy blurb. You can visit Candace on the web and sign up for her newsletter at candaceblevins.com.