Tour Kick Off: Of Gods and Madness by @justindherd #giveaway 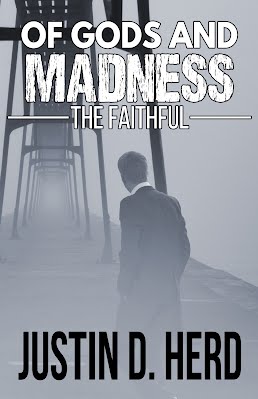 A mobster learns he's becoming a god, only to discover they die too.
The right hand of the dominant mob family, Raine Morgan is tasked with hunting down two miscreants messing with the bottom line. He finds them on the docks, but, in the confusion of the fight, accidentally kills their victim and lets them escape. Horrified at what he's done, Raine seeks redemption as well as revenge.

Things spiral out of control when a greedy middleman overthrows Raine's mob organization. It's only with the help of a friend inside the crumbling mob as well as a streetwise artist that Raine remains undetected as he searches for the men who started this all. Raine doesn’t realize, however, he has caught the attention of a disparate conclave of gods in the process.

As the pantheon returns to the city they'd abandoned, old conflicts re-emerge, causing divine civil war. Both sides try to pull Raine to their side, expecting to find a naive god for them to manipulate. Instead, they find a man stripped of everything, intent on playing both sides as they learn an awful reality - even gods can die.

I’ve been chasing writing for ten years now. I don’t remember much of my childhood, but I know that I started writing stories in the mid-90s, even if they were just an amalgamation of all the things I liked at the time. Now, I see it as a hopeful future career, but even if it just means people are reading and enjoying my odd ideas, then I’m good.

Just getting through all the permutations that could happen. I can sometimes spend days agonizing over an incidental decision, though, by the time I’ve worked through that one spot, I’ve figured out everything after and speed through the next several chapters.

Until I hit the next roadblock.

That’s a double-sided blade. The original person that helped me develop my first novel and gave me all the tools required to craft stories would be Mel Odom. He was a great guide for the first couple years of my journey.

The more recent help came from M. Weisberg. We met through Lara Williard’s #CPPitch and edited each other’s novels. She helped me focus on problems with Of Gods and Madness: The Faithful and develop some more conflict between characters. She also taught me the important of respecting a CP’s wishes and making sure you are serving their needs, rather than what you think they need.

I’ve got three other completed novels that are in varying stages of editing. One of those I might convert to a novella, but I also have ideas for two sequels to Of Gods and Madness: The Faithful. One would follow the gods, whereas the other would follow the mob family of the mortals.

I have thousands of books in my house. I had a library installed in one of the bedrooms, but even that wasn’t enough to hold all my books!

When divine civil war erupts in his port town, mobster Raine is forced to sacrifice himself or destroy his mob family in the chaos.

Justin D. Herd is a Fantasy Noir author who has been writing novels for ten years. He absolutely loves dark, twisted stories that take readers into unexpected places. Horror movies are his passion and he often takes stories to task for not logically thinking out their concepts. His home has been invaded by two eccentric children as well as a cat which is obsessed with all things digital.