Tour Kick Off: The Dawn of Dae by Trillian Anderson 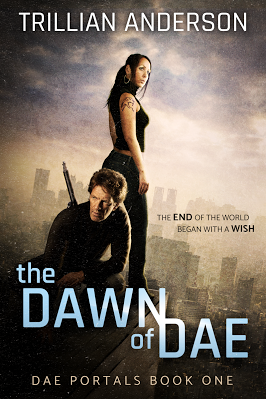 The chance to attend college is just what Alexa Daegberht needs to break out the mold of her caste. If she can become a Bach, she can escape the poverty she’s endured ever since her parents died when she was five. Only through education can she rise above her birth caste–and she knows it.
All of her plans fall to dust when she opens a portal within her refrigerator, turning her macaroni and cheese casserole into a sentient being. By dawn the next day, the mysterious dae have come to Earth to stay. Hundreds of thousands of people vanish into thin air, and as the days pass, the total of the missing number in the millions. Some say it’s the rapture of the Christian faith.
Alexa knows better: their dae ate them, leaving behind nothing more than dust as evidence of their hunger.
As one of the unawakened, she doesn’t have a dae, nor can she manifest any forms of magical powers. She’s lacking the innate knowledge of what the dae are and what they mean for the world. Now more than ever, she is an outsider. Her survival hinges on her ability to adapt to a world she no longer understands.
Unfortunately, one of the dae has taken notice of her, and he’ll stop at nothing to have her. Alexa’s problems pile up as she’s forced to pick her allegiances. Will she submit to the new ways of the world? Will she become some monster’s pawn? Or, against all odds, can she forge her own path and prove normal humans can thrive among those gifted with powers once the domain of fantasies and nightmares?