Tour Kick Off: A Hero Grinch For Christmas by @samanthyawyatt 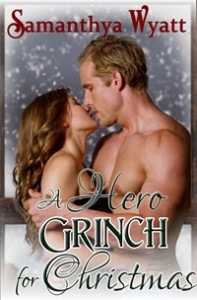 Dani will not allow The Grinch to hide from Christ­mas. She will cure Hunter of his nasty mood, even if it kills her. But who will save her from his pas­sion­ate kisses.

War hero, Hunter Gra­ham, has seen enough dev­as­ta­tion to last a life­time. At the end of his lat­est Army term, he accepted his dis­charge papers and never looked back. His uncle’s home is tucked away in the majes­tic moun­tains, a per­fect place for him to hide from Christ­mas and his own mem­o­ries. But he can’t hide from the delec­table Dani. The last thing he needs is a female in his life. But this one has the face of an angel and eyes you can drown in.
Dani Wimer left the Col­orado moun­tains and relo­cated in the bright lights of New York City. Every Decem­ber she returns to the vil­lage of Wyattsville. When a hunky mil­i­tary guy enters her aunt’s shoppe, he seems lost and angry. His scowl is intim­i­dat­ing, but that doesn’t bother the spunky girl who cel­e­brates the hol­i­days like it’s Christ­mas every day. She decides to put a smile on his Grinch face and ends up los­ing her heart in a pas­sion­ate whirlwind.

Samanthya lives with her husband in the Shenandoah Valley. She left her accounting career and married a military man traveling and making her home in the United States and abroad. Once she found historical romance novels, she couldn’t put a book down. She fell in love with the characters and needed to know their happy ending.
One day she put words to paper creating a story of her own. The more she wrote, the more she became involved with the characters, and they seemed to take a life of their own. She relishes the challenge of penning a story with strong characters, a bit of humor, and active scenes while creating new characters and bringing them together in a romantic tale. It took years of writing, joining RWA, joining chapters, entering contests, submissions & rejections which created the author she is today. By keeping her spirit and turning criticism into drive she has achieved her career as a published romance author.