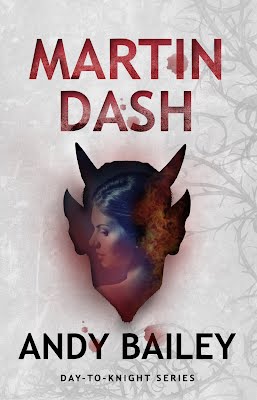 What would it be like to have no feelings? No desire, no anger, no pleasure? Behold Martin Dash. A man who possesses stunning features that captivate all who encounter him but is also cursed with a medical condition that means he has no emotion to give in return. But one woman is convinced that there is something behind the apparently blank façade and sets out on a dark trail to uncover the haunted past that holds the key to the mystery; a journey that takes in politics, criminal finance, London's neo-burlesque scene and, finally . . . murder. MARTIN DASH is the first book of a trilogy that relates the bizarre experiences of a young man whose life was always destined to be terrifying as well as exceptional.

If I could sell enough books to enable me to write full-time that would be great - I could produce so much more. In the meantime it's The Other Job that keeps the wolf from the door.

Probably the most thorny thing to grapple with is . . . what to put in and what to leave out. The way I write is very organic and, for me, almost anything could happen in the story (and that is the feeling I want my readers to have). So it can be very difficult to make the choice that has to be made to go down a particular route. But, in fact, that is the real fun bit and I get a definite sense of satisfaction when I've managed to work out what was actually the best route (for the story).

Yes, indeed: a big shout out at this point to Miranda Johnson, a good friend who types my scribblings for me (I write in longhand) - she did all of 'Martin Dash' and she also brings with that a whole lot of much-needed moral support. Thank you, mate!

Martin Dash was the first in a trilogy and I have just started writing the second book. I won't give anything away but each book is - or will be - a story that stands up in its own right, whilst being inextricably linked to the others, at the same time.

Of course. I suspect that virtually all authors come at writing from being avid readers. You read and read and read and, eventually - if you're arrogant enough - you think: 'I could do that.' I always have a number of books on the go and, currently, it's :-

'The Public Image' by Muriel Spark;
'The Genuine, Imitation, Plastic Kidnapping' by Les Edgerton; and
'Necromancer' by William Gibson.

A intriguing psychological romance thriller with a distinct twist of satire that is unlike anything else and will leave you wanting more.

#6 – Fantasy or Reality?
Two sides of the same coin.

#8 – Public School or Home School?
Home schooling hasn't really taken off in England in the way that, I understand, it has in the US; I'm not sure either I or my kids would be up to it! So I'd have to say Public School.

Andy Bailey is a British writer residing in deepest Staffordshire ('the Creative County' . . .) His principal claim to fame as an author (so far) is the creation of 'Martin Dash' and his recurring theme is the absurdity and futility of human endeavour (unless you're on double time) and his writing seeks to explore the strange motivations that drive the endlessly entertaining members of the species, homo sapiens.