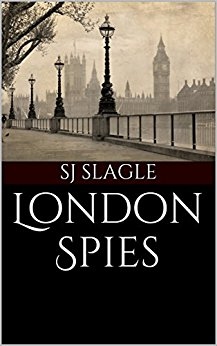 London Spies is a book of historical fiction set in London, England at the end of World War II.

Phyllis Bowden, a secretary at the American Embassy, is catapulted into the limelight when the Military Attache, Lt. Col. Ronald Lawrence, is arrested for espionage and her boss, the Assistant Military Attache, assumes the position. The arrest throws suspicion on everyone at the Embassy, particularly Lawrence's secretary whose attempted suicide convinces Phyllis to be more curious about what really happened. With bombs still falling on a devastated city, Phyllis begins asking questions but she never imagined the dark underbelly of diplomacy. Entering a shadowy world filled with cryptic messages and dangerous men, Phyllis learns quickly that a safety net doesn't exist and if she wants to survive, she better figure out the game fast.

SJ Slagle is a celebrated author of the Sherlock and Me series and the Phyllis Bowden series.
A teacher and nonfiction writer for part of her career, she taught in Florida, California and Nevada. She also writes western romances as Jeanne Harrell including these bestselling series: Rancher, the Westerners and These Nevada Boys with picturesque settings in the wild west of Nevada.