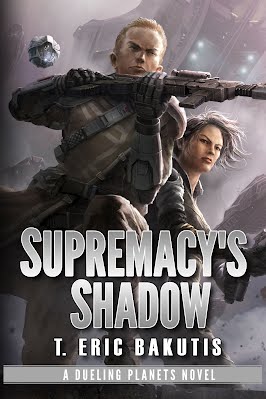 For Hayden Cross, a military investigator in the far future, whether his wife faked her death is the question that is probably going to get him killed. Having lost the only job that kept him sane, he has few resources and fewer leads. Oh, and a sadistic crime lord really wants to kill him.

As he fights through an underworld of fanatical rebels, callous bounty hunters, and corrupt cops, each step takes him closer to the truth about his wife’s fate and the oppressive government he once loyally served. On the way he may even liberate a planet and stop a war ... but only if he betrays everyone he loves. 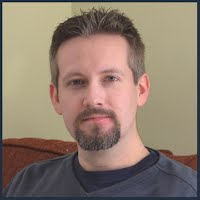 T. Eric Bakutis is an author and game designer based in Maryland. He is happily married and shares his house with a vicious, predatory cat and a sad-faced, cowardly dog. He’s been working as a professional videogame developer for over eight years. His first fantasy trilogy, Tales of the Five Provinces, is now complete, and his first science fiction novel, Supremacy’s Shadow, is due in February 2018.

In his spare time, Eric hikes with his lovely wife, little girl, and crazy dog, spends time in VRChat exploring the metaverse, and participates in local events like the Baltimore Science Fiction Society Critique Circle. His first novel, Glyphbinder, was a finalist for the 2014 Compton Crook Award, and his short fiction has appeared in several magazines and anthologies.

You can read his free cyberpunk police procedural, Loose Circuit, at www.loosecircuit.com

Posted by Anonymous at 5:45 AM