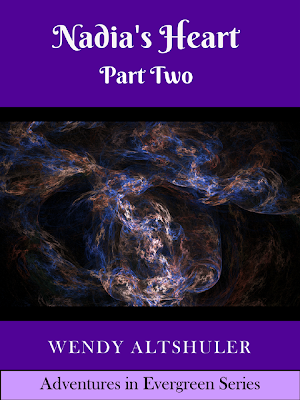 In Nadia's Heart, Part One, amnesiac Nadia knew that something was wrong, so she went in search of her missing heart. What she encountered has only brought more questions: about her origins and her ties to the people of the Land of Silence. She learned that her heart was indeed removed, and that her memory was erased by an evil Voice. But why?

Now Nadia and her glowing-eyed companion, Georgeonus, must help recover the stolen hearts of the children of the Land of Silence. In Part Two, they will do battle against the evil Voice and travel to frightening places. They receive help from a powerful Witch and Wizard, and Nadia gets her heart back—but it's not at all what she expected. Can they rescue the stolen children's hearts in time?

From Chapter VII: The Nether Regions:

“Mabel,” said Nadia, “how did you get down here? Did Georgeonus and Holofernes make it? Are they okay?”

Mabel smiled patiently, helping Nadia to step away from the table.

“Oh, I suspect they’re fine now” was her reply.

“Come,” she said, turning. She pulled her wand from her pocket, pointed it at the cloth, and the wrap sewed itself into pants and a belted tunic.

Nadia caught up to her. “Aren’t we in the canyon?”

“Then where are we?”

“We are in the Otherworld. We mustn’t linger!”

Nadia did not press the matter, but followed Mabel closely, striving to keep up. She had the feeling that they were neither in the underworld nor in a canyon. She remembered the ice castle constructed by the Voice. It seemed so long ago now. In that castle, when her thoughts perceived that perhaps it was not there at all, it would come into and out of view, disappearing before her. It was the same with this canyon. This time, she perceived her own illusion. When it faded, all she could see was light.

“Take my hand, Nadia!” said Mabel urgently, in a tone which alarmed her, and in a moment Nadia’s hand found Mabel’s, which clutched hers back. Mabel’s other hand came around Nadia’s waist and drew her close, and suddenly they were being sucked through some type of funnel. It was not comfortable; it felt dangerous, and there was great pressure all around penetrating Nadia’s cells.

From Chapter IV: The Silver Witch:

They remembered that her visit had been preceded by a magick dust.

The dust came from above, the air tingled, and miniscule, silver particles glistened as they fell. It was musical, and as they breathed, they smelled fresh air like new spring, and they felt an excitement of imminent magick. She appeared suddenly, and at first no one knew where she had come from or how; she was just there on the road. She came as naturally as if she had approached them from the road. But as the magick dust settled, they realized—remembered—that the Silver Witch had dropped out of the sky.

As she stood there smiling at them, they remembered that they had looked up at the sky at a circling dot which descended. As it approached, it formed the shape of a square, floating quilt. The Witch was soon revealed to be sitting on top in black garb and hat, her silvery skin thick and rubbery. With both hands placed on diagonal corners of the quilt, she jumped off and shook the fabric out like clean laundry and parachuted down to them, the tennis sneakers on her feet ready for the road. Softly she landed, snapping the quilt upward and folding it once, twice, three times, and again and again until it was a small square deposited into one of her pockets.

From Chapter III: Fighting Back:

They headed for the road, away from the castle tumbling toward them, hoping the mountain itself would hold until they could get to the bottom. But what awaited them at the bottom was a sheet of ice, and it too could crack and send them down into the frigid deep.

She had never driven a sleigh nor a team of dogs before. The pure instinct of survival now taught her. As they rounded the rough road, more slippery now as they gathered speed, their path looked grim. Giant chunks of the castle came descending down, hitting the mountain’s jagged sides and causing avalanches of huge falling debris. The children screamed, and Nadia wanted to do the same and take refuge closer in toward the mountain, but there was nothing that would shelter them. She kept focused on the dogs in front of her, thinking only of getting to the bottom. Cascading from above came another rock, and the children held onto the sleighs, terrified. Nadia tried to turn the sleigh toward the mountain to avoid it. They swerved dangerously around the edge of the road.

Something also descended from the sky. It was a black figure, but Nadia could not even think about another potential threat as the second sleigh bore down upon them, rushing behind her. They swerved back to a straight course, barely missing the rolling boulder which crashed onto the road.

Wendy Altshuler is a writer-producer who explores myth in new media. She writes fantasy novels and creates works in stop motion animation.  Her credits include award-winning screenwriting and WGA-accredited representation. With a degree in psychology and a Master of Arts from Columbia University, Altshuler documented the work of international choreographers and wrote and produced regional programming. Her short plays have been performed at Boston Playwrights' Theatre, at regional schools and most recently, Puppet Showplace Theatre. Altshuler's young adult book series has been hailed as "emotionally moving, uplifting and wholesome," and "spirited and haunting. . .with much symbolism and beauty."