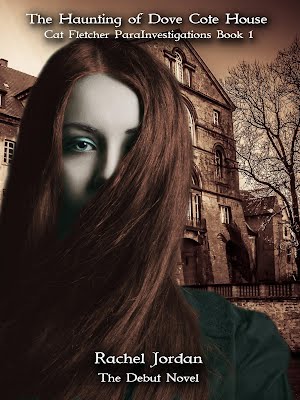 Following the death of her father Cat Fletcher returns to the family home where she lived until she was 18.

But Cat's memories of the past are blurry, despite dreaming regularly about Dove Cote House.

And her home coming is far from perfect, when in the true meaning of the expression, the past comes back to haunt you, does just that.

“Can you tell me about the house’s history?”

Cat shook her head. “Very little I’m afraid. Only how it got its name and its reputation for being haunted.

It’s something Rob and I had talked about researching.

My parents never got round to doing it for fear of what others would say or think. They felt that it was easier to just let it go.

I had hoped to do it tomorrow, but with my husband arriving it doesn’t seem feasible now.”

“You know Cat it might be better to go to Winford Library”, Rob said.

“They have fantastic research facilities now and there is always the Museum too.”

“Well perhaps we can do that on Saturday,” James said, before adding “It’s something any number of us can do as many hands make light work. But if we can’t all go it doesn’t matter.”

Cat let out a deep sigh. “I’ll be honest I don’t know how Phil is going to react to this. Although he was good enough to tell me about the potential story, and he got suspended because of his actions. Don’t worry I’ll be there on Saturday no matter what. This is my house, where all these things have and still are happening, and I’m going to get to the bottom of it once and for all.”

“That’s the spirit if you’ll forgive my pun. Now one other thing that crossed my mind,” James said. “I’m assuming that once you have completed the research you’ll then start investigating and dealing with the spirit yourself. “

“You have some fantastic items to help you with that Cat.”

“Thanks, but it’s all down to Rob. Without his help I wouldn’t have known where to start.”

“Which reminds me,” Rob said. “Any problems if I bring my equipment over, and store it with yours?”

“None what so ever, and if you want to leave it here permanently feel free to do so.”

“Well in that case I’ll go and get it tomorrow. Fancy coming with me James? You can meet my folks.”

Cat grinned to herself as it was obvious neither man felt comfortable being around when Phil arrived.

“Good idea. I’d like to meet them very much.”

“Have you ever done a paranormal investigation like this before? “

“Yes, in fact I have on more than one occasion. I’ve been called in by investigators just in case they were dealing with something demonic.

The Church never approved when I did. I guess that all went against me in the end, but I stand by what I did and always will.

Now back to what I wanted to ask you.

Are we only dealing with the woman here, or is it both spirits? If you are happy to let the child continue residing here you can do so.”

“She’s never caused any trouble, and I guess she has become part of my life. I’m more than happy to let her stay.”

The words had hardly left Cat’s mouth, when every door in the house started opening and slamming uncontrollably.

“Okay,” Cat said loudly. “I don’t think that’s the answer I was meant to give.”

As the doors kept opening and closing, Cat, Rob and James looked on in horror as the table was dragged across the room, but more frighteningly as Cat’s books flew off the shelves and were flung at them by unseen hands. Then the curtains were pulled from their rails and cushions thrown about.

The unending banging of the doors had begun to make the house vibrate and Rob felt as if he was going to develop a violent headache because of the noise.

“For God’s sake stop this at once,” James’ clear voice shouted out.

The front door suddenly opened with a heavy thud: the bolts and locks ripped to pieces.

“Stop it please,” Cat screamed. “In the name of God just stop it.”

All activity in the house suddenly stopped as quickly as it had begun, and to Cat it felt as if she would hear a pin drop any moment it had gone so quiet.

Her eyes opened wide as she saw a dark form looming in the doorway, which slowly turned into the woman.

James and Rob turned to look at Cat and then followed her gaze.

The spirit, which neither had seen until that moment, was drawing closer to them by the second.

The woman stood in front of James. “Get out of this house, you vile exorcist.”

The next second she was in front of Rob. Her movement that quick no one had seen it. “I’ll warn you a second time. You are to leave.”

Cat stood up tall as the spirit moved in front of her. She was staring at Cat intently, and for a moment, Cat was afraid her legs were going to give out under her. Instead she pulled herself together and stared back at the woman.

“Anything you want to say to me? Or is it only my friend’s you feel like threatening today?”

The woman raised one of her hands in Cat’s direction. “You are the biggest traitor of them all. You openly plan to get rid of me. How could you do that? How can you treat your mother this way?”

She pushed her hand towards Cat, and to everyone’s shock Cat was thrown backward violently, her head narrowly missing hitting against the window ledge.

With a high pitch shriek the spirit disappeared.

Rob and James ran to Cat to help her.

“I’m all right. Nothing feels broken and I’m lucky I didn’t bang my head.”

As she stood with the support of the others, Cat saw Phil standing in the doorway, shock registered on his face.

“Cat, in God’s name what just happened? This place looks like a bomb’s hit it!”

Hi there. My name is Rachel Jordan

Two things I have loved from the time I was small are the paranormal and writing.

I like nothing more then curling up with a ghost story that keeps you wondering what will happen next. Or failing that watching one of my favorite paranormal films.

I did some freelance journalism many years ago, but I adore sitting down and writing stories.

Is it any wonder that I have decided to combine the two things I love the most?

"The Haunting of Dove Cote House", is my debut novel

I live in the United Kingdom.