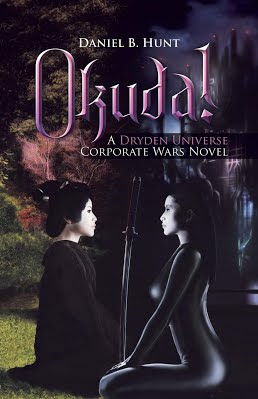 Synapse Biotechnology bred Lucy Okuda to be the ultimate killing machine. What they did not anticipate is that Lucy is completely uncontrollable.

Bred to kill, Lucy Okuda has escaped her space station prison. A schizophrenic psychopath, hunted by the Obsidian Order, her former captives and tormentors, Lucy lives a life on the edge as M-Prov Carnival Supply Company’s premier assassin.

Jillian Caldwell is the most powerful woman who has ever lived. The CEO of Linn Corporation, she leads one of the three most powerful corporations in the universe. And someone wants her dead.

Yet in a universe rife with corporate deception and intrigue, all is not as it seems. And Lucy Okuda finds herself, along with a recovering drug addict, a criminal syndicate’s boss, and an advanced robot, on a mission that might just end in intergalactic war!


Daniel B. Hunt grew up in the midwestern United States. He has a creative writing degree from the University of Kansas. He is a member of the Dryden Experiment writing group that focuses on writing science fiction set in the Dryden Primer universe.