Tour Kick Off: Descent of the Gods by Mark G. Cosman 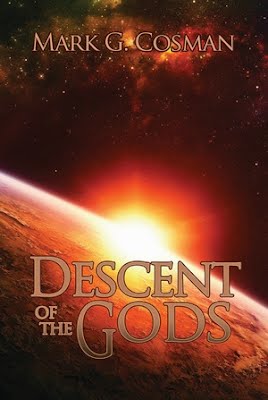 In their self-indulgent realm, the gods know no suffering until the end of their time. Compassion is the only portal through which they can escape the self and its eventual demise, but without suffering, compassion cannot be recognized. Thus they seek compassion in the human domain where happiness and sorrow abound.
Once there, they engineer a superior humanoid race and are soon distracted by the delight they find in the daughters of men. The gods become the extraterrestrial visitors of our collective memory.
The ageless story follows the adventures of the god Quay, his love of Daya, a humanoid, and their entanglement in the eternal web of impermanence, unrelenting consequences and death amidst a background of war, famine and geologic cataclysm.

Mark Cosman’s writing began when his daughter, Berlyn, was murdered following her high school prom. It was when Mark left the rubble of his beliefs and assumptions to go in search of answers to the most profound questions we ask ourselves. “A Flower in the Snow” is a result of that odyssey.