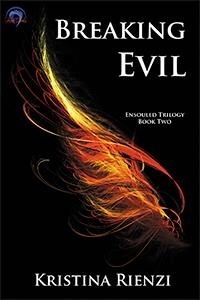 BECOMING EVIL
One year ago, Sera Murano chose evil. She left her human world behind to transform into an Ensoul, a rare and powerful demon, all to fight the evil she was about to become. Working for her father Lorenzo, the leader of all demons, she secretly vowed to overturn his plot to destroy humankind.
BATTLING EVIL
That is, until demon hunters attack Sera and her beloved, Damon, and the truth about the human-demon war is revealed. Torn between the human life of her past and the supernatural one she lives now, Sera must decide who is the worse enemy: evil or humanity.
BREAKING EVIL
To win the battle of her life, Sera is forced to do the unthinkable, taking drastic measures and risking the lives of those she loves most. She must fight to the death against the only supernatural leader she’s ever known, all for a chance to break the cycle of evil. 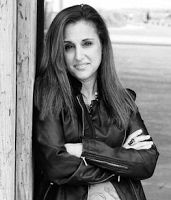 Kristina Rienzi is an American author who has been writing in some fashion for several decades. In 2014, she achieved traditional publication for her debut novel, Choosing Evil (Ensouled Trilogy, Book One), and has since independently published, Luring Shadows, Twisted, and Winter Road. Her latest novel, Breaking Evil (Ensouled Trilogy, Book Two) will be releasing soon.
Professionally, Kristina has been active in the writing community as a member of several organizations such as Mystery Writers of America, Sisters in Crime and International Thriller Writers. She has also served as the New Jersey Romance Writers Literary Book Fair Chair and, most recently, the President of Sisters in Crime-New Jersey. Kristina holds a Masters Degree in Psychological Counseling and a Senior Professional Human Resources Certificate, working in both fields throughout her business career.
Personally, Kristina is married and doggie mommy to Pekingese and Shih-Tzu pups. Although a New Jersey resident, she dreams of one day moving to Hawaii and living the ‘Aloha’ way. When she is not writing, she spends her time reading, watching paranormal investigations, rooting for her West Virginia Mountaineers and relaxing with her loved ones, wine in hand.