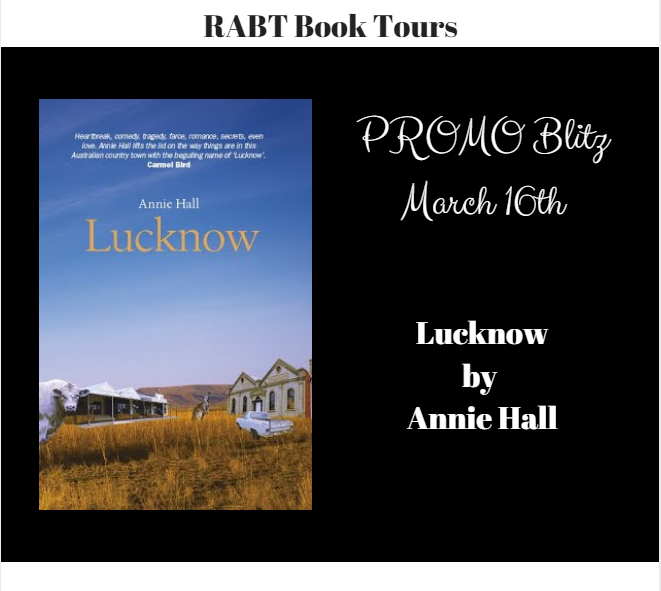 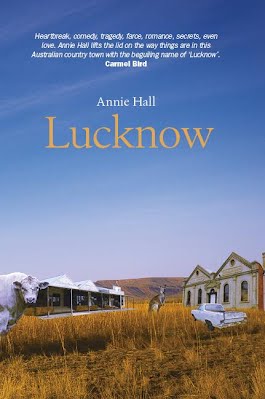 When Rosie's marriage suddenly ends one night in Sydney, nothing makes sense any more. She doesn't know what to do next. Her sister, Juliette, suggests she come and live where she is — in Lucknow,  a town in Central Victoria, that they knew in their childhood. It doesn't seem to offer much at first. But her life changes in ways she had not thought possible. Lucknow isn't just a romance, it's about life in a small country Australian town.

"Heartbreak, comedy, tragedy, farce, romance, secrets, even love. Annie Hall lifts the lid on the way things are in this Australian country town with the beguiling name of Lucknow." — Carmel Bird 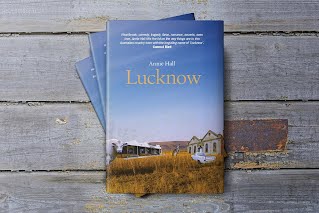 While Hamish was being minded by Mrs Pickett for a couple of hours, Juliette and Rosie grabbed their bathers and headed out to the old reservoir. It was the perfect time for a swim, the sun had real warmth, the wind held its breath, there was a clarity of light in the air and the fragrance of eucalyptus and spice. The old reservoir shimmered and sang with bird calls that afternoon. Save for two fishermen sitting on the levee wall mute and still as statues, Juliette and Rosie had the place to themselves. Near the water’s edge they baked on bare rock like lizards, their towels rolled under their heads for pillows. Juliette lay on her back staring at the sky while Rosie lay on her front gazing at the water.

‘I heard about your quiet night at the pub,’ Juliette said. ‘Jade said you were announced on stage as single. Really putting it out there, aren’t you Rosie? Next it will be an ad in the local paper.’

‘I had no idea Eloise would do that,’ Rosie said. ‘It was so embarrassing.’

‘You don’t know the half of it,’ Juliette said. ‘If you heard what they were saying about you.’

Juliette looked at her sister, and didn’t want to hurt her feelings. ‘It’s a wonder you weren’t raffled off like a tray of meat.’

There was a pause.

She looked at her sister, always slight, like a teenager in her blue bikini with yellow buttercups. She didn’t look strong enough to have had Hamish or gone through a torrid marriage breakdown. She is tougher than she looks, Juliette thought. If she didn’t physically show signs of suffering she must have felt it somewhere. But where did Rosie feel it? wondered Juliette.

‘I know I’ve just arrived, Juliette,’ Rosie said, yawning. ‘To another age, it seems, as well as another place.’

‘In Lucknow, you must take care,’ Juliette said earnestly. ‘Gossip spreads faster than a virus, it’s more invisible than hepatitis. It just floats around and somewhere decisions are made about you, your reputation is decided. It might not be the truth but it is what will pass as the truth.

‘You will be stuck with it. And, and,’ Juliette said, warming to her point, ‘it will be very hard once your reputation is fixed to change it. It will stick with you no matter what you do. If people find that you vary from your reputation then they will find it curious, but they won’t disbelieve the gossip.’

Rosie thought about what Juliette was saying. ‘If people can’t distinguish the truth from gossip then why is their opinion of any value?’

‘They only know what they hear,’ Juliette said. ‘You need to take care.’

The smooth grey rocks were hot beneath their bodies. Rosie felt sweat beginning to trickle and the water looked invitingly cool.

As warm and brown as a bottle of beer in the shallows, the water was chilly and fizzy as champagne at waist height. Rosie dived under and came up tingling with shock at how cold it was. Juliette was already ahead, arms and legs slicing cleanly through the water. Rosie set off like a threshing machine, churning the water white as she overtook Juliette and raced the one kilometre to the other side. She stood in the shallows, her ribs heaving and subsiding as she gasped for air, her body bent, head down near her knees, eyes swimming with red, brain nearly blacking out from a lack of oxygen. Juliette came up behind her, the water draining off her body in silvery rivulets and watched her sister.

‘You always push things,’ she said, casually. ‘You always go too far.’ 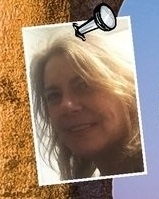 Annie Hall has worked as a journalist in country towns as well as Sydney and Melbourne. She lived for a number of years in the Goldfields area of Victoria.