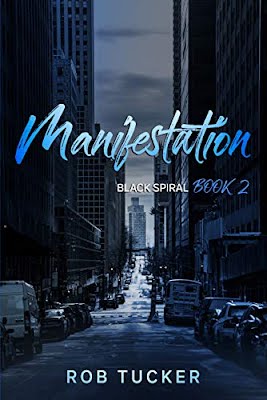 In Manifestation, Simonetta’s personal mission of sabotage and destruction catches the attention of the FBI and brings Leon Saffulo, a profiler, to the case. When technology cannot explain the phenomenon, he reluctantly works with a retired magician, Maximilian Schultz, who takes him into the simulated individual module (SIM) world, the creation of virtual life from dark energy.

Bernadette Garcetti is a Wall Street banker’s executive secretary whose life is mired in distortions of subjective social reality. Through Bernadette’s perceptions and psychological issues, she uses Simonetta as a facet of her imagination and strategically selects her targets according to their social and illegal crimes.

Other books in the Black Spiral Series

A Season of Sons

A Season of Sons is a paranormal thriller of deception, illusion… and murder.

Robert Tucker, the author of The Revolutionist, A Season of Sons, and Pulitzer-Nominated Burton Blake, is a graduate of the University of California, Santa Barbara and received his graduate degree in communications from the University of California, Los Angeles. Rob worked as a business and management consultant to advertising, corporate communications, and media production companies as well as many others. Now retired, he resides with his wife in Southern California where he devotes much of his time to writing. He is a recipient of the Samuel Goldwyn and Donald Davis Literary Awards. An affinity for family and the astute observation of generational interaction pervade his novels. His works are literary and genre upmarket fiction that address the nature and importance of personal integrity.