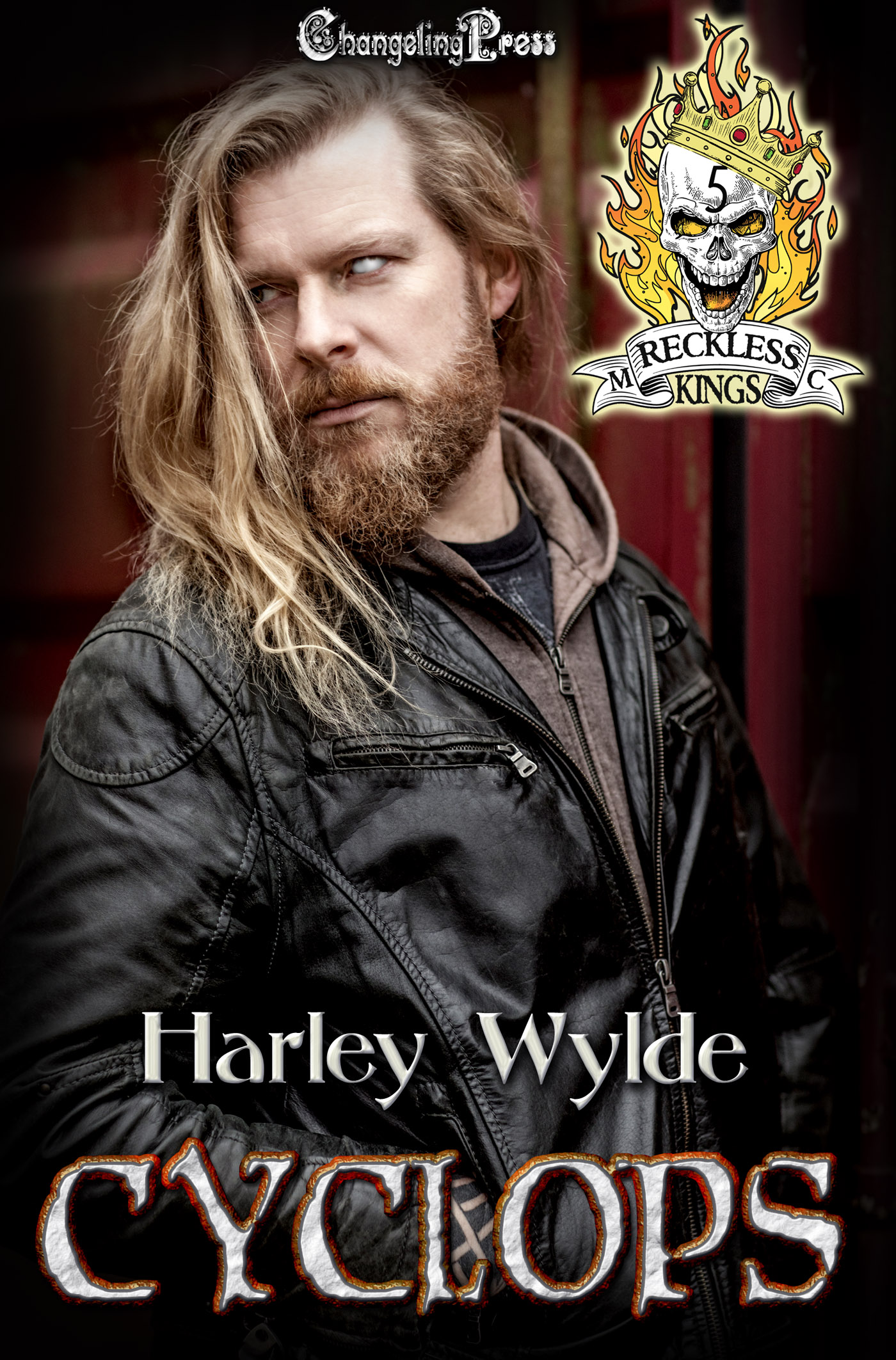 Leigha -- To say my dad is overprotective is too mild a description. Add in all my honorary uncles in the Dixie Reapers MC and going on dates is next to impossible. So when Lyssa invites me to visit her at the Reckless Kings in Tennessee, I jump at the chance. Maybe I can finally experience life a little. I know my family goes after bad men, the kind who hurt women and kids. I never counted on becoming a victim myself. The biker who comes to my rescue is… scary. Hot. And all alpha. He’s exactly what I need!

Cyclops -- My stint in the military left me a parting gift. Scar tissue that not only left me blind in that eye, but makes the damn thing look spooky as fuck. I’m used to people staring. Mostly. Then my brothers had to stick me with the road name Cyclops. They’re not funny, even if they think they are. Uncle Sam may no longer find me fit for duty, but it doesn’t mean I’m useless. When I hear a scream, I don’t hesitate. Thought I was saving a girl. Turns out she’s a woman -- and one I shouldn’t touch. The daughter of a Dixie Reaper, she’s her daddy’s little angel… and damn if I’m not tempted to lure her to the dark side and get her a little dirty.

WARNING: Cyclops is part of the Reckless Kings MC series. It contains an age-gap relationship of more than 10 years, violence, bad language, and adult situations. Some readers may find the subject matter difficult to read. But there’s a guaranteed happily-ever-after, no cheating, and no cliffhanger! 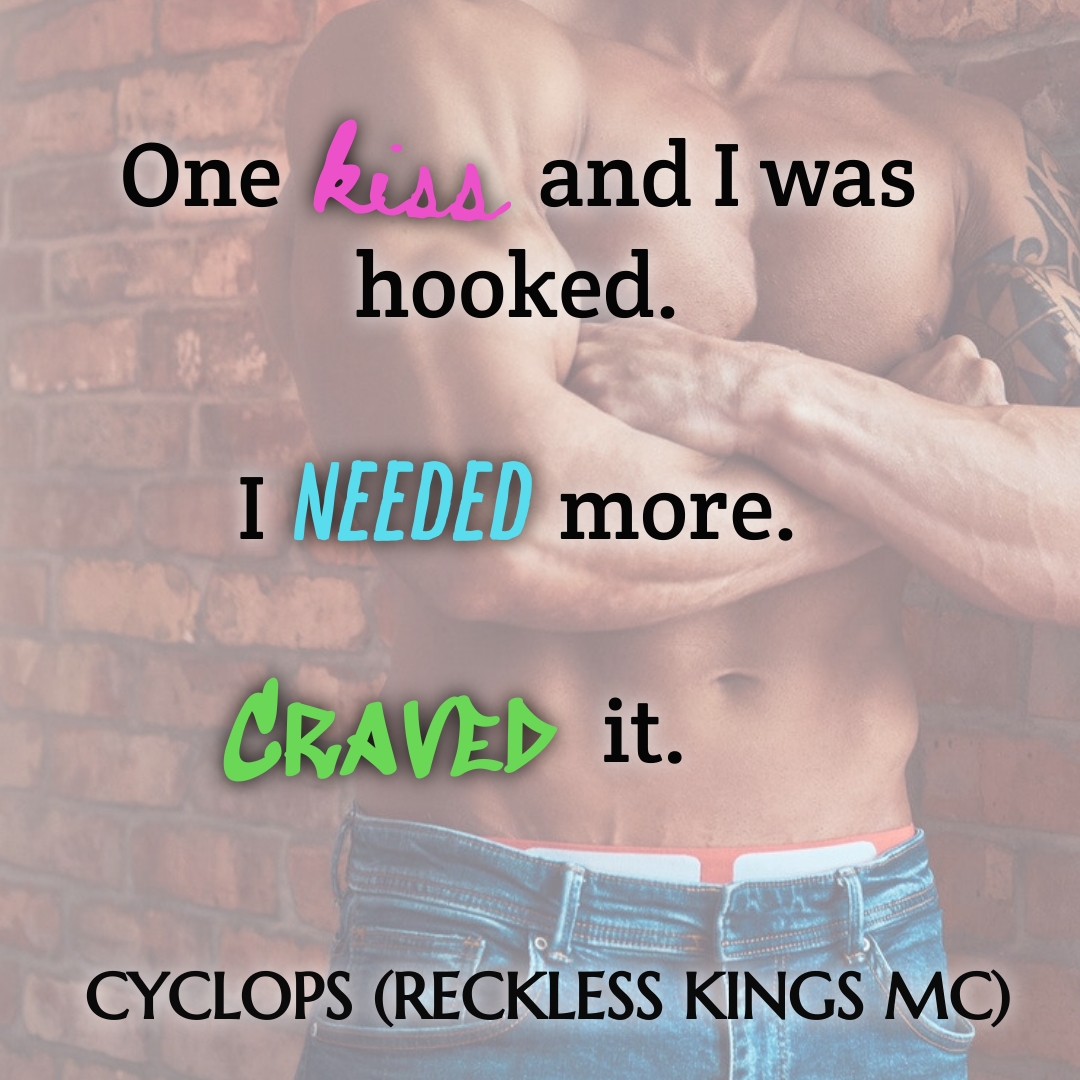 I’d just pulled my keys free when I felt someone behind me. The heat of their body pressed into mine and I froze. How had I not heard anyone approaching? All the training I’d received flew out the window. My hand shook as the man caged me between his arms. He leaned in closer, the smell of beer and cigarettes making me cringe.

“Pretty little thing like you shouldn’t be out here all alone.”

Bluff your way out of this, Leigha. I licked my lips and tried to relax my body. “What makes you think I’m alone?”

“Saw you pull up. I don’t see a man with you. Unless you prefer women?” He put his lips near my ear and bit down hard enough I yelped. “That it? Maybe you just need a good, hard fucking to change your mind. Prove to you cock is better.”

No, no, no. This couldn’t be happening. My heart raced and I couldn’t stop my hands from trembling. “I like men.” I took a breath and held it for a moment. “When one gets here, let me know.”

“You bitch!” He spun me around, making me drop my coffee and my keys. He pressed his forearm against my throat. “Think I’m not a man? Guess I need to prove otherwise.”

“Danny, there’s too many people,” another guy said. I glanced his way and realized he’d be no help. The look in his eyes said he didn’t care for what his friend wanted to do to me, but he was too chicken to make him stop.

“Then we’ll take her somewhere else.” He yanked me away from the car, his hand bruising my arm as he dragged me toward an alley. I struggled and fought, hoping someone would see us. If they did, they pretended otherwise. He shoved me against the brick building and started tearing at my clothes.

He ripped my shirt down the middle and started working on unfastening my jeans. “Help! Someone…”

His fist connected with my stomach before he slapped me across the face. I gasped and coughed. “Shut up. You keep fighting, it’s going to be even worse.”

He shoved my jeans down my hips and tried ripping my panties. I kicked at him, stomped on his feet, and clawed at his face. I did everything I could to break free. It only pissed him off more.

I refused to let this piece of filth take my virginity. Reaching up, I jammed my thumbs into his eyes and pushed as hard as I could. He screamed and backed up. I didn’t relent and clung to him like a barnacle. I wanted his eyes to pop, to make him suffer and remember this moment the next time he tried to hurt a woman. He’d gotten the drop on me, and I’d frozen like a damn deer in the headlights. But down deep, I was my father’s daughter, and while I might not wear a patch, I was part of the Dixie Reapers by blood. No way I’d let this asshole win.

“I’m not a damsel you can bully and terrify. I’ll kill you before I let you rape me.” He knocked me to the ground. Before I could stand, someone entered the alley.

I eyed him, tensing as I wondered if he was here to help, or to join my would-be rapist. Then I noticed the leather cut over his shoulders, and his attire. Biker. Relief flooded me. If he was part of a club, he’d likely be from the Reckless Kings. And if he wasn’t, my chances were still good he might help me. Even the weekend riders seemed to have a certain code they followed.

The new man went after Danny. I saw the back of his cut and smiled. Reckless Kings MC. Since he was one of Beast’s men, I knew he wouldn’t hurt me. He threw punches at the guy’s face and torso, not holding back. While he whaled on the asshole, I pulled up my jeans. My shirt was a lost cause. Even trying to tie it didn’t help, so I let it fall to the ground. The worrier who’d tried to tell his friend not to hurt me had fled down the alley.

Danny fell to the ground, and the biker nailed him in the ribs with the toe of his boot, then kneeled down beside him. “If I ever see you put your hands on a woman again, I will cut them off. Then I’ll remove your tongue. Your eyes. Your ears. And finally, I’ll cut off your dick and shove it down your throat. Assuming I can find something that small without a magnifying glass. Understood?”

Danny groaned and nodded. The biker stood and kicked him in the face, knocking him out cold. When he turned to face me, I scanned his cut. Cyclops. I would have asked why he had that name, but the guy wore an eye patch over his left eye. There had to be a story there, and I’d love to hear it. “Thank you,” I said.

He nodded and shrugged out of his cut. Reaching behind his neck, he pulled his shirt off and handed it to me. “Better cover up. Did I get here in time?”

“Yeah. He got close, but…” I pressed my lips together as I put on his shirt. A spicy scent made me want to lift the material to my nose and inhale, but I figured the guy might find that creepy. And weird.

My phone started chiming non-stop. The tone told me it was Logan, which meant my twin had sensed my fear. It had happened one other time when we were learning to drive. Except in reverse. Logan had taken Dad’s bike out without permission and wrecked it. I’d sensed his fear and pain the moment it happened. I’d need to text him back before he freaked out. Well, more than he already had.

He slipped his cut back over his shoulders and I tried not to stare at his broad chest, or the fact his abs were well-defined. I definitely didn’t eye the happy trail and imagine what he’d look like with his pants unzipped. Reaching up, I made sure I wasn’t drooling. On the plus side, the incident with the fucker on the ground hadn’t soured me toward men.

“Come on, kitten. I’ll walk you to your car. Make sure you get inside safely.”

I walked over to him and wrapped my fingers around his bicep. He reached up and covered my hand with his before leading me out of the alley. I pointed to my car and noticed he scanned his surroundings as we made our way over to it. I could feel the coiled tension in him and wondered if he’d gotten that way from being with the Reckless Kings, or if he’d been in the military. His behavior reminded me of all the men back home I called family, especially the ones who’d served our country.

He helped me gather my things, and I was thankful no one had stolen my purse and wallet. I didn’t even remember dropping them. I eyed the empty coffee cup forlornly and picked it up. After I tossed it into the trash, Cyclops reached out to take my hand.

“Why don’t we sit a minute? You have to be a bit shaken after that.”

I’d thought I’d been doing an admirable job of hiding it. Apparently, I hadn’t. I wondered if he knew who I was. 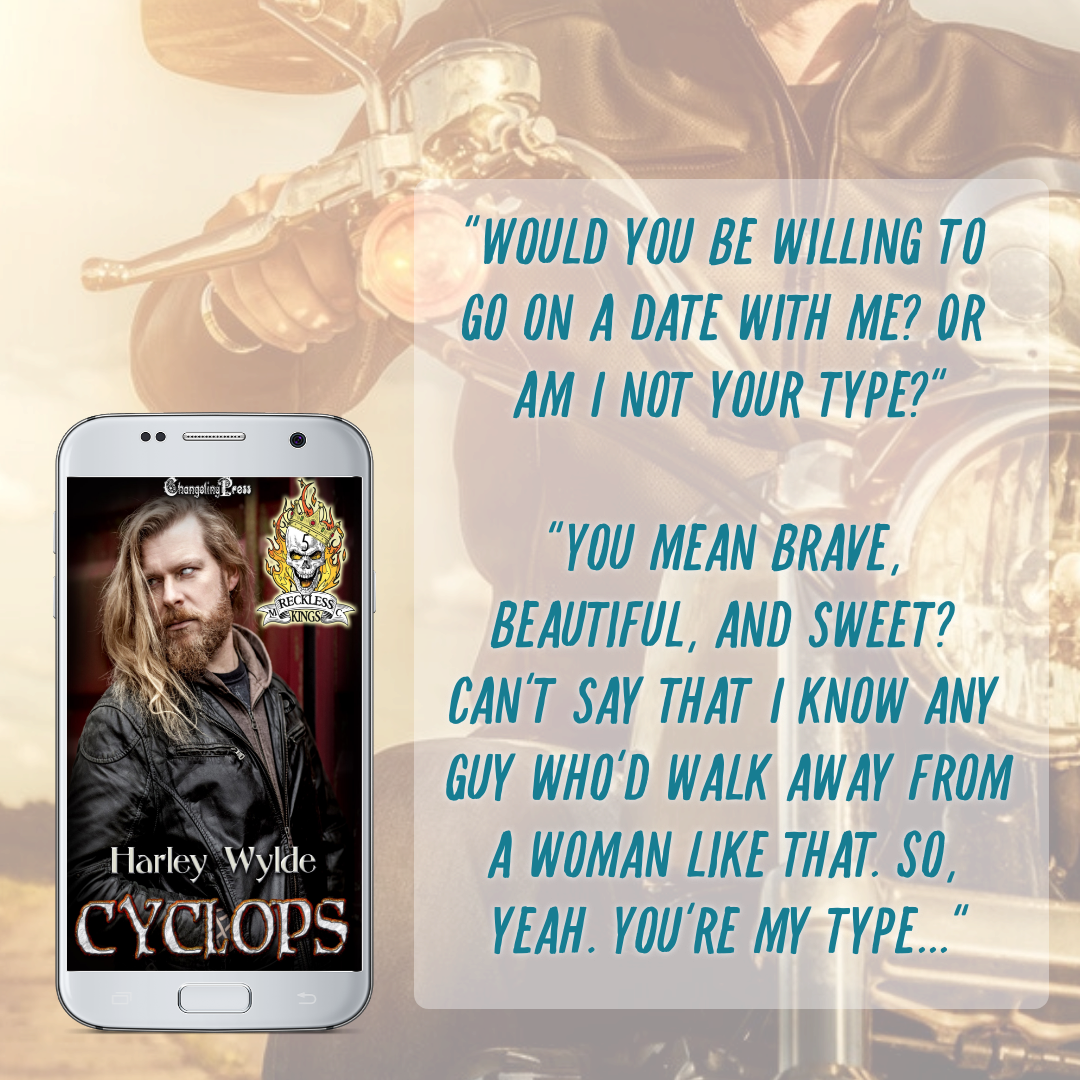 When Harley's writing, her motto is the hotter the better -- off the charts sex, commanding men, and the women who can't deny them. If you want men who talk dirty, are sexy as hell, and take what they want, then you've come to the right place. She doesn't shy away from the dangers and nastiness in the world, bringing those realities to the pages of her books, but always gives her characters a happily-ever-after and makes sure the bad guys get what they deserve.

Get a FREE ebook when you join Harley’s newsletter