Tour Kick Off: Borrowing the Doctor by @victoriapinder #giveaway 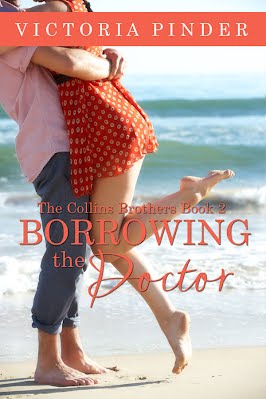 Party girl. Art thief. All around bad girl. It’s what all the newspapers call socialite and heiress Kate Sparrow. It’s all untrue. Kate’s been set up and she’s following the orders of the FBI to get the real criminal, her father. She’ll have to put up with her sister, the wedding fiasco, and her own fears that someone is after her, trying to stop her to get what she needs to prove her innocence.
Doctor Daniel Collins joins his brothers on a cruise to the wedding of his young cousin. His cousin begs him to keep a close watch on the bride’s sister, Kate. He's to keep her from ruining the wedding.
Kate doesn’t trust Daniel's help in her life, but the man’s interference is blocking a few problems. She lets him. After all, he spent a few years in the military and having a friend like Daniel is nice. But when her fears become true, someone is after her, pretending to be in a relationship with the sexy doctor has its benefits. What she hadn’t planned was opening her heart to trusting him. But if she doesn’t open up, she’s going to lose out on far more than her life, she’d lose out on love.

Victoria Pinder grew up in Irish Catholic Boston then moved to Miami. Eventually, found that writing is her passion.
She always wrote stories to entertain herself. Her parents are practical minded people demanding a job, but when she sat down to see what she enjoyed doing, writing became obvious.
The Zoastra Affair, Chaperoning Paris, Borrowing the Doctor, and Electing Love, Mything the Throne and Favorite Coffee, Favorite Crush will be published in 2014.
Now she is represented by Dawn Dowdle of Blue Ridge Literary Agency.
Also she’s the Vice President for the Florida Romance Writers. Her website is www.victoriapinder.com.
Website
Facebook
Twitter
Blog
Goodreads