Tour Kick Off: Occult .45 by @carcanobooks 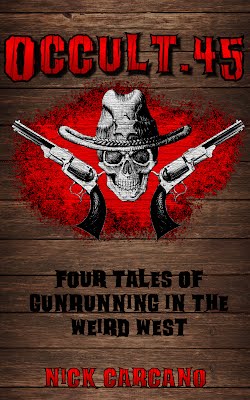 Preston Cobb is always looking to make a quick buck selling any kind of gun he can get his hands on, but when the denizens of the weird west get in the way, Preston's his own best customer. Now collected in one omnibus, join Preston as he faces an ancient evil in the snowy Sierra Nevadas in ABOMINABLE, finds romance and bloody mystery in Nevada mining country in SILVER MOON, and squares off with the undead south of the border in DEAD TO RITES. Finally, Cobb finds retirement more exciting than he'd like in an exclusive bonus short story: GUNRUNNER TO THE STARS.

Amazon (Available on Kindle, paperback, and as an audiobook)

#1 – Do You See Writing as a Career?
I’ve definitely been bitten by the writing bug, so I’m sure I’ll be writing whether money follows or not.  Writing’s a tough industry, but I feel like if I build it, the readers will come.  (Eventually.)

#2 – What was the Hardest Part of Your Writing Process?
Revising.  I tell people that if I’d known how hard revising the first draft of my first novel was, I might not have written it.  Not only are you confronted with crappy writing, you have to fix it while not destroying the thing you built.  It’s like trying to replace parts in a plane while in midair.  You’re hoping you don’t break it and you know you can’t stay up in the air forever.

#3 – Did you have any One Person Who Helped You Out with Your Writing Outside of Your Family?
My girlfriend actually.  She’s always been a big cheerleader of my work, but one of the biggest ways she helped was by having to grade homework.  She’s a 7th grade teacher, so on weekends she usually goes to a coffee shop to grade and plan lessons.  So I go with her and write.  My first and second novels wouldn’t exist without that help.

#4 – What is next for your writing?
I’m working on a series of short series for an anthology that are horror/sci-fi set during World War 2.  My first full-length novel, Boom: A Wild West Heist, comes out this fall, with a second novel coming next year.

#5 – Do you have an addiction to reading as well as writing? If so, what are you currently reading?
I do!  Ever since I took the plunge and bought a Kindle, I’ve plowed through more books than ever.  I just worked my way through Myke Cole’s Control Point series, which is like Black Hawk Down with magic and goblins, and I’m in the middle of Elizabeth Bear’s Karen Memory.

DESCRIBE Your Book in 1 Tweet:
Wild west gun runner keeps running into monsters, is his own best customer.

#1 - iPd or Mp3?
iPod.  Not a day goes by I’m not listening to headphones while walking to work or at the gym.
#2 – Chocolate or Vanilla?
Vanilla.  It’s too bad that vanilla has come to mean “plain”.  Really well done vanilla is a complex and rich flavor.

#5 – Danielle Steel or Nicholas Sparks?
Danielle Steel, hands down.  I read one of her books in high school and it’s clear why she’s ruled the romance world.

#6 – Fantasy or Reality?
Fantasy with a realistic twist.  That’s cheating, I know.

#7 – Call or Text?
Text.  I’m so glad technology has totally accommodated my dislike for phone calls.


eBook.  I do miss turning pages every once in a while, but the ability to carry a whole library and download more books at any time is amazing. 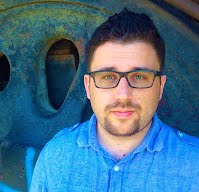 Nick Carcano spent his childhood pulling cactus out of his feet and listening to coyotes howl in the California high desert. He speaks rusty Mandarin and Spanish. When he's not writing his day job involves literally saving the world, which sometimes involves shooting zombies, but usually involves a lot of e-mail.  If you like dim sum, RPGs, sci-fi, or corgis, you should be his friend.  He’s currently working on The Big Weird One a series of sci-fi/horror short stories set during WWII and will release his first novel, Boom: A Wild West Heist, in fall 2015.