Tour Kick Off: A Time for Everything by @MystiParker 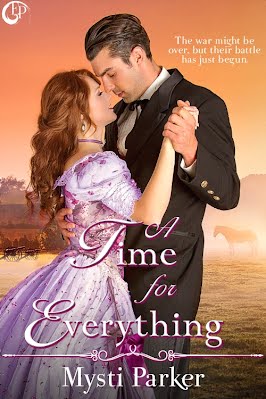 After losing her husband and only child to the ravages of the Civil War, twenty-five-year-old Portia McAllister is drowning in grief. When she sees an ad for a live-in tutor in another town, she leaves everything behind in hopes of making a fresh start. But as a Confederate widow in a Union household, she is met with resentment from her new charge and her employer, war veteran Beau Stanford.

Despite their differences, she and Beau find common ground and the stirrings of a second chance at love—until his late wife’s cousin, Lydia, arrives with her sights set on him. Burdened with a farm on the brink of bankruptcy, Beau is tempted by Lydia’s hefty dowry, though Portia has captured his heart.

In another time and another place, his choice would be easy. But love seems impossible amid the simmering chaos of Reconstruction that could boil over at any moment into an all-out battle for survival. Will Beau and Portia find their way into each other’s arms, or will they be swept away by raging forces beyond their control?

Most definitely. Especially this year. I had a one book per year output from 2010 to 2013, when I was diagnosed with clinical depression. I sought treatment and spent all of last year bouncing back by publishing a couple of novellas and a children’s book.

This year, I’m back with a vengeance, determined not to let depression hold me back. I set myself a 4 book goal. One was another children’s book, then a short sequel to my romantic comedy series, and then my first historical romance in July. Late fall will see the publication of the 4th book in my Tallenmere fantasy romance series.

Add to that some flash fiction stories published in magazines, the production of 3 audiobooks, and attending a slew of book events, all while taking care of home, husband, three kids and too many pets, and I’ve been one busy chick. If that’s not a career, it’s one dang hectic hobby!

Everything! LOL The first draft is always the hardest. You’re basically creating something out of nothing, building a foundation, and it has to be strong enough to hold the final structure of the story. For an impatient gal like me, it’s hard to handle the bumps along the way while figuring out how to fit all the pieces together.

This particular book actually began in 2010, back when I was still pretty green. I got about 2/3 of the draft written when I decided I wasn’t quite ready to finish it. I didn’t have the experience or time to research that this novel demanded. So I put it on the back burner and worked on my Tallenmere series until 2013, when I got it back out and used NaNoWriMo to rewrite it from scratch. I spent the winter revising, began submitting in spring, and now I’m happy that I waited. EsKape Press is wonderful, and readers are already loving it.

There is something to be said for patience, after all.

I had several, actually. I’m lucky to have a wonderful network of writers who beta read and exchange critiques with me. All of them contribute something different and useful to the writing process. I cannot express my gratitude for them enough. *GROUP HUG!!*

I’m currently working on Book 4 of my fantasy romance series and praying I get it all done so it can be published this fall. I’ve kept fans of the series waiting long enough, since it’s been two years since the last book. I’ve also got plans for another children’s book, another contemporary novella, and the third part of my romantic comedy series. Oh, and another historical which I’m chomping at the bit to research and write.

In the meantime, my inner Jiminy Cricket is reminding me to keep my head down and finish Book 4 (No Place Like Home). Do not pass go, do not collect $200, but don’t forget to breathe and eat. Got it.

PS: You can read a dark and sensual sneak peek of No Place Like Home here:  http://mystiparker.blogspot.com/p/coming.html

Yes, though lately I haven’t read nearly enough. I’m reading “Miss Peregrine’s School for Peculiar Children,” http://www.amazon.com/Miss-Peregrines-Home-Peculiar-Children-ebook/dp/B004FGMDOQ which is weird and creepy and right up my alley. I’m also enjoying audiobooks as of late—they’re great during workouts and during my kid chauffer duties. The latest is a collection of creepy doll-themed stories called “The Doll Collector.” http://www.amazon.com/The-Doll-Collection/dp/B00VF1R6K0 I’ll be reviewing it for SQ Mag in July.

DESCRIBE Your Book in 1 Tweet: #MustRead Can a Confederate widow and a Union veteran find love amidst the turmoil of Reconstruction? http://tinyurl.com/ot4wyoc

#4 – Comedy or Drama? Comedy—why not laugh when you can?

#7 – Call or Text? Text. I hate talking on the phone. I’d much rather text, email or talk face to face.

#9 – Coffee or Hot Chocolate?   Coffee, believe it or not. ‘Tis the fuel of writers.

#10 – eBook or Paperback? Love the feel of a good paperback, but eBooks are so convenient for traveling!

Mysti Parker is a wife, mom, author, and shameless chocoholic. She is the author of the Tallenmere standalone fantasy romance series and The Roche Hotel romantic comedy series. Her short writings have appeared in numerous anthologies and magazines. Her award-winning historical romance, A Time for Everything, will be published this summer by EsKape Press.

When she's not writing fiction,Mysti reviews books for SQ Magazine, an online specfic publication. She resides in Buckner, KY with her husband and three children.