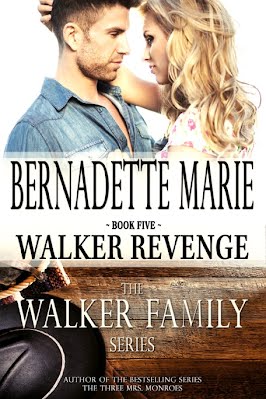 Russell Walker’s life was spared when his truck veered off the road and flipped. When he wakes after surgery, he can only assume the medicines are making him see things, because the woman he loved—who broke his heart—is taking his vitals.

Chelsea Quinn has spent the past four years keeping clear of Russell Walker after she married another man and had a baby. Now she is thrust back into his life as his caretaker, and living with his family when her ex-husband is let out of prison.

Some heartbreaks are too severe to recover from, and Russell is fighting every feeling he has as not to get his heart broken again. But sometimes the pull of love is just too strong, especially when the lives of those you love are threatened, and someone is looking for revenge.

Bestselling Author Bernadette Marie is known for building families readers want to be part of. Her series The Keller Family has graced bestseller charts since its release in 2011, along with her other series and single title books. The married mother of five sons promises Happily Ever After always…and says she can write it, because she lives it.

When not writing, Bernadette Marie is shuffling her sons to their many events—mostly hockey—and enjoying the beautiful views of the Colorado Rocky Mountains from her front step. She is also an accomplished martial artist with a second degree black belt in Tang Soo Do.

A chronic entrepreneur, Bernadette Marie opened her own publishing house in 2011, 5 Prince Publishing, so that she could publish the books she liked to write and help make the dreams of other aspiring authors come true too. Bernadette Marie is also the CEO of Illumination Author Events.