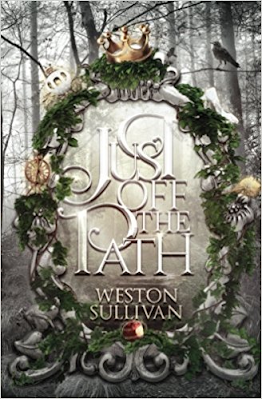 Hansel never asked to be a hero. He never wanted to fall in love with Rapunzel, Queen of the East. He didn’t ask to be raised by Gothel the Wretch, and he certainly never wanted to be credited for her arrest. But more than any of that, Hansel never wanted to lie: but he did. He lied about everything. He thought that he was done with it all when he and his sister Gretel retreated into the woods to reclaim their land, but he should have known better.

Years later, Rapunzel’s guards knock at his door, and they say the words he hoped that he would never hear: Gothel has escaped. As he and Gretel take refuge inside Rapunzel’s castle in the eastern capitol of Hildebrand, Hansel is thrust back into everything he never wanted in the first place: his lies, his legend, and his lust. In the wake of it all, he knows that Gothel has escaped to finish what she started. She is out to make sure that the Sleeping Beauty never wakes, and that Grimm suffocates under her blanket of thorn and vine. In order to find Gothel and save the kingdom, Hansel and Gretel must look for fact in a land of fairy-tale by following a trail of grisly murders, a girl in a red cape, and a powerful little man who can’t stand the sound of his own name.

As they search for answers, Hansel finds that he isn’t the only liar in Grimm, and that there may be a traitor among them of royal proportion.

Weston Sullivan lives and writes in Tampa, Florida. He spends his days splitting time between writing, a full time job, and studying for his degree in Creative Writing from the University of South Florida. He enjoys everything related to storytelling, including film and theater. He likes to read all genres, from contemporary fiction to classic favorites such as Faulkner and Woolf. After he finishes his undergraduate coursework and continues to build his career as an author, he plans to attend graduate school in New York City.

With Purchase of a Copy of the novel, you can enter to WIN AND IPAD