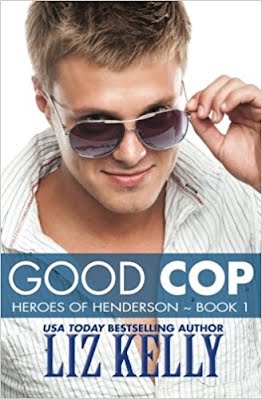 FREE until the end of the Year!!!

What happens when best friends fall for the same girl?
A bromance, a romance, and a love triangle.
Local sports heroes Brooks Bennett and Vance Evans are used to being part of a winning team. Yet when it comes to romance their good cop, bad cop images have them handcuffed. They want a woman’s point of view to help unshackle their reputations, and they’ve picked out one pretty, pony-tailed firecracker to do it.
Lolly DuVal longs for a summer fling that can set off all her bells and whistles. So she agrees to tutor Henderson’s hunkiest heroes on what women really want. But now she finds herself caught between two cops and a hard place. And those bells and whistles? They are starting to sound a whole lot more like alarms.

The Newest Release in the Heroes of Henderson Romance Series
Release Day – October 24, 2017

After Dallas, Laidey Bartholomew finds Henderson to be a breath of fresh air. Out from under the expectations of her socialite family, she can be as invisible as she chooses. She’s perfectly happy flying under the radar, until a hot-tempered, masculine work of art roars into town on his Road King and zeroes in on her.

All of a sudden, Laidey’s not invisible anymore.

Xavier Wright hasn’t lived in Henderson for fourteen years. You’d think by now everyone would have forgotten about his juvenile antics. Knowing his sick ma doesn’t need any additional stress in her life, he’s determined to make amends for his bad-boy ways. Unfortunately, a certain little newcomer continually brings out the worst in him.

Harry believes it’s a match made in heaven.

All the books in the Heroes of Henderson Series are complete romances. They do not need to be read in order, but it might be more fun that way as characters continue to show up in Henderson in big ways and small.

Growing up every summer in a place where dancing and romancing are literally part of its theme song, Liz Kelly can't help but be a romantic at heart. And since her favorite author, Kathleen E. Woodiwiss wrote some of the world’s greatest romances, she's just trying to give the world a little more of that. (Okay, maybe a little sexier that, but we are now in a new millennium after all.)

A graduate of Wake Forest University, where she met her handsome golf-addicted husband, (who is now sporting dark glasses everywhere he goes) Liz is a mother of two grown sons (also sporting dark glasses) and a miniature Labradoodle named Annabelle. They split their time between The Windy City of Chicago and the Fountain of Youth, a.k.a. Naples, FL where dancing and romancing continues on ad infinitum.